Top Five Countries I Know Nothing About

I've long had an interest in geography - it was one of the few subjects I did well in at school! - and I'd like to think I have a pretty good understanding of such matters including, unlike many people it seems, the location of every country our beleaguered planet is home to. I've also over the years come to learn at least something about most of them, whether by hearing about them on the news, watching films based in them, or even by visiting them, but some countries have remained little more than names on a map to me. So, here are the five I probably know the least about, or knew the least about until doing a bit of research for this post! 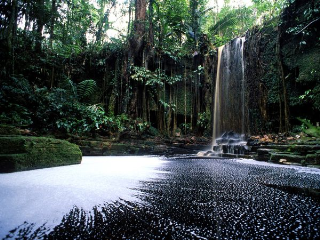 I already knew that Suriname was 'one of those little ones at the top of South America', but that was about the extent of my knowledge. I've now learned that it's a former Dutch colony and the smallest country on the continent with a surprisingly low population of around half a million, most of whom live on the coast at the north. That leaves the interior of the country to be filled with tropical rainforests and savanna which, happily, remains mostly untouched by us idiots. Indeed, much of it takes the form of protected nature reserves and has been designated a UNESCO World Heritage Site. Back on the Atlantic coast, the economy is dominated by bauxite (aluminium ore) mining, an industry centred near the capital of Paramaribo which is home to almost half of the country's population, but tourism is also increasing thanks mainly to the diverse and beautiful nature reserves, one of which overlooks one of the largest man-made lakes in the world. 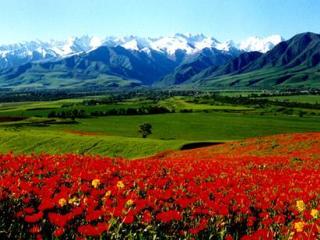 This is one of numerous 'stans' in middle of Asia and is also probably the country with the hardest name to pronounce! Not that many outside the region had probably tried - as a former Soviet Republic, it's a country that some had most likely not even heard of until recent years! It's quite a small country for the region and is located on the northern edge of the mighty Himalayas which means it's a little on the mountainous side. Living in the many towns and villages located in the valleys and basins are almost 6 million people. The biggest city is the capital, Bishkek, which is home to almost a million, with the only other large city, Osh, containing about a third of that. The remaining population live in small, rural farming villages sprinkled throughout the fertile areas between mountains which, as you can see from the picture, contains some stunning landscapes. 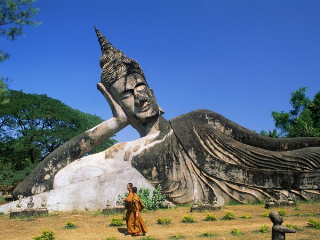 I think the only time I've heard this country mentioned is during a few episodes of Prison Break where it is apparently the site of some sort of secret test by 'The Company' - eeeek! Back in the real world though, I've found out that Laos, which is sandwiched between Thailand and Vietnam, is actually run by a Communist regime who took control of the country after hundreds of years of rule by a traditional monarchy descended from the ancient Lan Xang kingdom. Its another landlocked country and much of the landscape is mountainous and thickly forested but there has been an increasing amount of deforestation in recent years which has begun to cause environmental problems. Outside the capital of Vientiane, the economy is largely agriculture-based but tourism is increasing as well, with the ancient temples and demonstrations of the traditional culture proving very popular. The population of Laos has increased rapidly and is now at 6½ million people of various ethnicities who, unusually, are considered by their altitudinal distribution (lowlands, midlands and highlands). 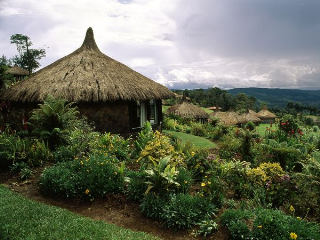 This country has to me always been merely the island which 'fits' on top of Australia, or at least about half of the island, and that of course means that, unlike the last two countries on this list, it's far from landlocked! Indeed, as well as occupying the eastern half of the the large island of New Guinea, there are many smaller islands under the country's control. Although just over 300,000 people live in the capital, Port Moresby, much of the 6 million population still lives in primitive rural conditions resulting in one of the most culturally diverse countries in the world - over 800 languages are spoken, for example. It seems it's not just me who doesn't know much about it either, as apparently it's among the least explored countries in the world, both culturally and geographically, with many wonders believed to be concealed by its vast (but diminishing) jungles. It's also a country located on the Pacific 'Ring of Fire' (snigger) which means there are plenty of volcanoes. 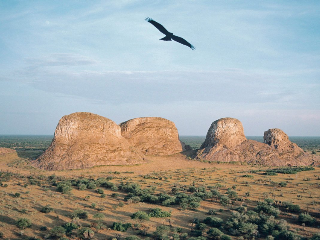 Each of the many times I look at a world atlas, Africa is right in the middle, and one of the countries that's always stared straight back at me is Chad. It occurred to me many times that I know nothing about it (other than its amusing name) but I've never really gotten around to finding anything out either. Until now! Named after the large lake on the south-west border that it shares with Niger and Nigeria which is the second largest wetland area in Africa, Chad is a country largely consumed by the vast Sahara Desert but the southern region does consist of much more fertile land which is home to most of the surprisingly large population of 10 million, including the capital of N'Djamena, as well as several large national parks. Like most African countries, Chad was once under European rule, France in this case, and since independence has suffered from much political instability. The country is currently undergoing an oil boom but since it also ranks as the world's most corrupt country, it's not likely that much of this money will be used to improve poverty levels.
Posted by RetroKingSimon at 14:15