Although I've been interested in nature since my childhood, I've never really been too concerned with learning how to differentiate between all the different infraclasses, which are classes within the classes. For example, I would hope anyone could correctly determine the difference between a bird and a fish, but how about telling the different types of fish or birds apart from one another? It may not be too taxing but it's not something I've ever really tried to do, but one infraclass that's always stuck in my mind is that of the marsupials.

All marsupials are mammals but while some mammals give birth as we do and some lay eggs, but marsupials give birth to their young much earlier than either of the other types and raise them to infancy in a handy pouch. This characteristic makes them unique in the animal kingdom and their distribution is also more specific than many other types of animals. The name is most commonly associated with Australia, and indeed many of the mammals living on this continent are marsupials, but they can also be found in South and Central America too. Despite this, the splendid creatures I've selected for this list are all from the bonzer land down under: 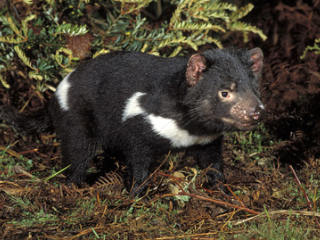 I suppose this angry creature is better known as a Warner Bros cartoon character these days but it's actually a mammal about the size of a small dog. Long ago it lived all over Australia but its population was slowly reduced until, as its name implies, it was found only on the large island of Tasmania. Since the late 30's they've been the largest of the carnivorous marsupials but they may not hold that status for too much longer as their numbers have fallen dramatically since the 90's as a result of diseases such as cancer, as well as us stupid humans of course. One reason for this is, or at least was, fear of them due to their ferocity while feeding and the loud screeching noise they make, but more recently it's just been for the usual reasons - for their fur or simply because their presence proves inconvenient. 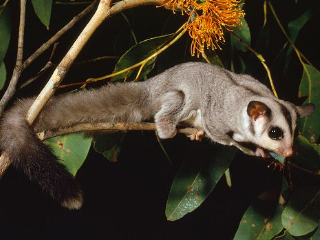 Despite being one of the lesser-known marsupials, I just had to include these funny little things! I believe I was introduced to them by one of the BBC's many fine nature documentaries which showed them gliding between treetops using the membrane that stretches from their hands to their feet giving them a similar appearance and ability to the more famous 'flying squirrel'. Unlike them, however, the sugar glider is a type of possum and lives in the forests across the northern and eastern regions of Australia, on Papua New Gineau, and was introduced to Tasmania. It gets its name from its fondness for sugary foods as well as its more obvious talent, and is a very social creature, living in family groups in hollow sections of trees. Happily it continues to thrive despite its apparent attraction as an 'exotic' pet. 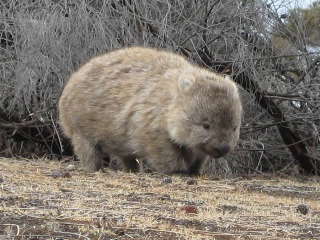 My first memories of this rather peculiar-looking creature come courtesy of one of the Aussie soap operas my mum used to watch in which one of the characters kept one as a pet (whom I seem to recall was named 'Fatso' - hee hee!). I'm not sure how many are really kept as pets but the porky creatures are certainly looked upon fondly by the folks down under - every October they celebrate 'Wombat Day'! Who couldn't love these gentle, furry, grass-munchers anyway? They are generally about a metre long, although there are three different species, one of which is sadly close to extinction. The other two are common though, and live in eastern and southern Australia where they dig burrows into which they can dive at surprising speed if any dingoes are nearby. 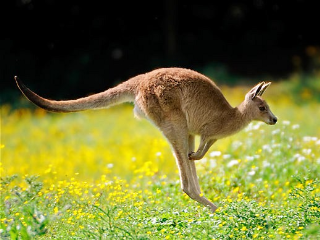 These strange creatures are the very epitome of the marsupial for many and it would be hard to argue. How, or perhaps more accurately, why on earth did they evolve to the stage where their rear legs and feet became so enormous they could only realistically move around by hopping? Whatever the reason, it certainly makes them among the most unique and iconic of all the animals in the world, and a treasured national emblem of Australia in general. Surprisingly there are only four main species. The one with the largest range - the red kangaroo - is the largest marsupial in the world and lives across almost the entire continent, which of course means it has to endure the searing heat of Australia's scorching deserts. Fortunately they've developed a few ways of keeping cool and therefore are still a common and popular sight across the vast country. 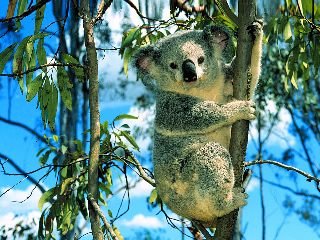 My good friend Luke has long been a fan of these amusing things and how could he not be? They look funny and they're lazy oafs too! Contrary to popular (although getting less so) belief, they're not bears but are the only representative of their own family and are found in eastern and southern Australia where they spend most of their lives in eucalyptus trees. About two thirds of their days are spent sleeping with much of the rest spent eating leaves - an unusual diet since the leaves are low in protein and contain numerous toxic compounds. They don't seem to mind though and munch their way through half a kilo per day! Like the kangaroos, they are popular and very important to the Aussies so, fortunately, efforts have been made to keep their population as high as possible, but they're still facing several threats, not least from us as usual. Let's just hope they manage to put up with us...
Posted by RetroKingSimon at 21:38