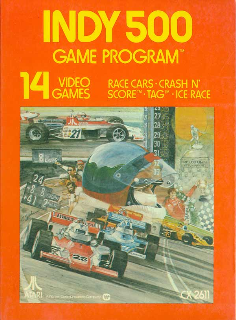 They may have rather faded into obscurity somewhat these days but overhead racing games were once an immensely popular kind of game. I suppose all genres have their day though, and this kind lasted longer than most considering they were one of the first ever kinds of video games. Indeed, the first example was released waaay back in 1974 and was followed by many similar games as the technology gradually improved. These were all large, expensive arcade machines though, but it wasn't long before such games were also available for home systems as well. Among the first of these was this seminal title released by the very inventors of the genre exclusively on their first console as a launch title. It was bundled with two 'Driving Controllers' which were essentially paddles and therefore allowed very precise manoeuvring around its courses which... don't really have much in common with the titular race but never mind - not too many VCS games were particularly realistic!

Like many games on Atari's console, Indy 500 was intended for two players but happily it also caters for single-players as well. Accordingly, there are fourteen game variations in all which include one and two player versions of 'Race Cars' which are normal races around single-screen circuits, 'Crash n Score' which involves crashing into a small randomly-positioned square, 'Ice Race' which is similar to 'Race Cars' except the tracks are icy and therefore slippery, and for two-players only there was a 'Tag' game. The single player games are time-trial-based and not against any computer-controlled cars but the two-player games are score-based - first to reach a certain target wins! This basically means the one-player modes are for getting in some practise, and you'd be well-advised to do so!

The action is presented in the VCS's trademark low-resolution graphics and since each track and game variation takes place on a single screen, things can get a bit cramped at times. Added to that is the fact that the cars are pretty nippy which means crashes will probably come often! Rather than just stopping dead and leaving you stuck, however, touching your opponent or the side of the course merely slows you down, almost as though driving through thick treacle in fact, and allows you to reposition your car reasonably easily. Obviously it still hinders you enough to cost you time or the lead but it does make races/events far less frustrating than they could've been, and the controller is precise enough to allow for flawless driving, at least in theory!

Something that should help this is the graphics which, while quite chunky and featuring some startling colour combinations, are very tidy and organised. The cars are simple but quite nicely designed too, although the sound is poor, merely consisting of a constant and not very pleasant engine drone. Overall though, Indy 500 is really rather splendid for such an early example of the genre and is a title whose 'variations' provide some genuinely distinctive games which are all a lot of fun. There are two tracks unique to each game mode too, so it's not one that will get boring quickly, especially with the slippy ice tracks which take some skillful driving to successfully navigate! This is definitely a game to play on the real console rather than via emulation, but if you have access to such hardware and have a friend handy, you'll have hours of fun with it. Games like this are the epitome of the VCS for me...