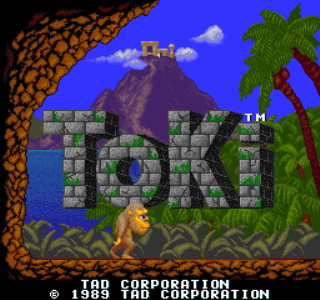 Considering how awesome all monkey’s are without exception, there are surprisingly few of them in the video game world. The most obvious example is the mighty Donkey Kong but which others? The stick-wielding SonSon or the unnamed-but-helpful fellow from Psycho Fox? Perhaps the excitable whooping oafs from the Ape Escape games or the reckless Super Monkey Ball simians? I can’t think of too many more personally, but I did recently remember this game by the otherwise rather obscure TAD Corporation. Technically, it too stars a primate, but all it not as it initially seems. In this case, our hero started out as a Tarzan-like tribesman (named Toki, unsurprisingly) who was content living a simple life somewhere in the Pacific Islands when the beautiful Miho, a princess of Toki's tribe (on whom he was also quite keen, apparently), is kidnapped by evil witch doctor, Vookimedlo. Before Toki can oppose him, he is turned into a Geeshergam, one of Vookimedlo's ape-like minions. 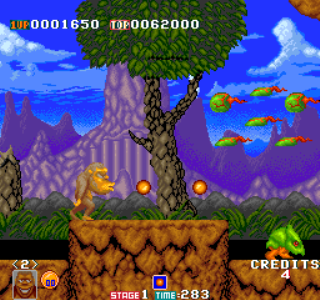 However, after a probably-painful transformation process (it certainly looks it judging by the short intro sequence!), Toki sets off in pursuit of his quarry anyway only to find that it lies at the end of six treacherous stages. Appropriately enough for the locale, these take place across jungley plains, through spooky caverns, through clear blue lakes, near a fiery volcano, and even an ancient temple. Being an ape, Toki is now a bit of a lumbering oaf. He can walk of course, but not very quickly, and he can climb ladders and vines and things of that nature, but most interestingly he has also had a unique ability bestowed upon him - the ability to spit fireballs! He can do this rapidly in seven directions (all around him but directly down) and can seemingly conjure up an unlimited supply of them from deep within his surprisingly unflabby belly. Not only that but he can also power-up his flamey burps to more powerful projectiles, three-way shots, swirly things, and even a full-on flamethrower! 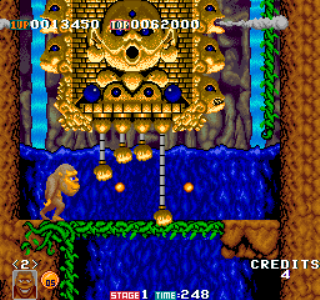 These power-ups can sometimes be found amidst the rotting carcasses of downed enemies and sometimes just laying about the place unguarded, and as well as offering Toki more spit-power, there are also ones that give him a temporary shield (in the form of an American football helmet of all things!), increase his jumping ability, and increase the time limit. All of them, shot-power-ups and otherwise, last only for a short while, but fortunately there's quite a few of them around. Some enemies also release coins when shot which will award you with an extra life if you manager to find fifty of them, although this isn't easy as you can see if you look in the bottom-left corner of the screenshots! The enemies consist of some Toki-like ape minions of Vookimedlo but also include what looks like pretty much every creature on God's green earth as well. Most of them fall to a few shots from Toki's asbestos-lined mouth, but there are also a few larger mid-boss-type creatures as well as the larger still and much stronger actual bosses at the climax of each stage. 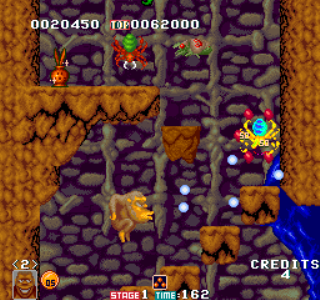 As well as his shooting ability, Toki is also able to jump on weaker enemies to defeat them. A helpful by-product of this is that it also enables him to reach some power-ups that would otherwise be beyond his reach; in fact, it's probably the only reason to do it as a single touch from any enemy costs him a life. As you might imagine, this can make Toki a rather challenging game! It's not an especially long game - a flawless run would probably take around 20 minutes - but it will take most players many, many times longer than that to even complete it at all, never mind that quickly! Happily, despite being rather challenging, it's not a tremendously unfair game. For starters, this is the first game of this type I've played for a while that doesn't have bloody respawning/infinite enemies, and there are also several restart points on each stage as well. Admittedly, some sections will likely cost you a life or two at first and do need memorising, but generally the going is manageable. 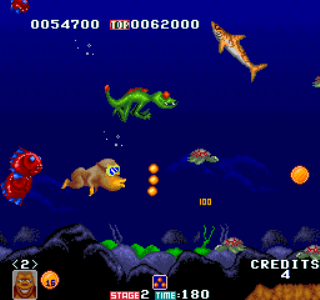 The style of the graphics is another appealing aspect of Toki whose stages do a good job of portraying the region in which the game is set. They aren't hugely varied, consisting of various caverns and tropical landscapes as well as the odd watery bit, but are atmospheric and still leave you wondering what the next area will look like. The visuals also reminded me a little of several other games of the same period in that the colours are mostly quite subtle which can seem to disguise the detail a little in some instances, and is also the case with the main sprite although he still looks pretty good and is well animated. The enemy sprites are the most colourful aspect of the game and are highly varied. They mostly consist of creatures such as spiders, bats, bugs, lizards, fish, flying things, and lord knows what else, but there are also some more unusual foes like dragons, ghosts, and even zombie and flying demon apes (that's what they look like at least)! 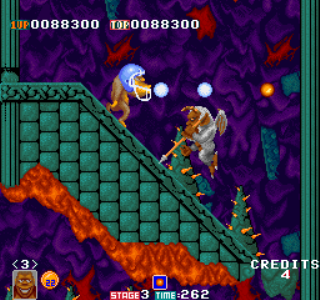 The bosses are mostly splendid too, and include an angry tribeswoman, a floating eyeball monster, a belching blob, a decidedly unwooly mammoth, and several others. The audio is slightly less pleasing than the graphics but still not bad. The music is rather quiet but the tunes are quite relaxing and a nice style - according to my wife they use a samba beat which she strongly approved of! As with most platform games though, the most enjoyable part is exploring the stages. As mentioned, they're not that big, but they are nicely designed and include many memorable sections. There's a lot of climbing/dropping involved so they're far from basic left-to-right efforts and there are lots of features to discover, and doing so with Toki is quite slow but enjoyable and addictive as well. Progressing far into the game requires a good amount of practise and there's nothing that's terribly original in concept here - near enough everything has been seen before in one form or another - but Toki seems to wrap them all in a slightly unusual and strangely appealing package.