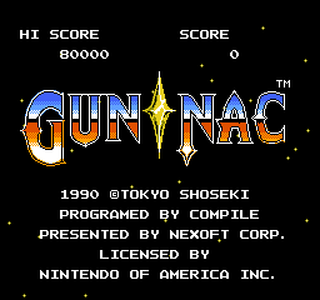 Our talent for gradually destroying our own planet is quite remarkable and, if this vertical-scroller from Compile is anything to go by, we won't be learning our lesson any time soon. The splendidly-named Gun-Nac, you see, is set in the 'distant future' by which time we have irreparably shagged up our planet by consuming all of its resources. Much like Agent Smith says, our only way to survive is to 'spread' to a new place, in this case artificial solar systems called 'IOTA Synthetica'. Even these are now in danger, however, from a mysterious wave of destructive cosmic radiation sweeping through the area. The Galactic Federation therefore apparently has little choice but to send the brave Commander Gun-Nac, son of the Legendary Xan, to investigate the cause of the radiation and wipe it out. It doesn't take long, however, before he discovers that this floopy energy flooding the galaxy has actually 'caused ordinary inanimate objects to spring to life and attack the solar systems residents'. Eeek! 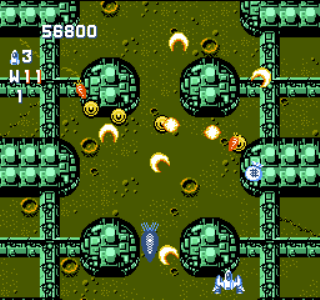 This insanity won't do, obviously, so Gun-Nac must get to work by clearing eight stages of the newly-malevolent objects/creatures which take all manner of forms. Many of them are fairly normal - there's everything from small ships, drones, and ground-based guns, but there are also some weirder ones such as angry carrots, fish, and acorns. Your ship starts the game with a basic forward shot and a small supply of smart bombs but there are many power-ups doing the rounds from the off. These sometimes appear upon the destruction of normal enemies, particularly a formation of smaller ones, but most often from the otherwise inconsequential smiley face things that drift down the screen, and there are two types - numbered and lettered. The former offer five different weapons: 1 - multi-directional shot, 2 - fragmenting energy balls, 3 - homing wave shots, 4 - short range but powerful flame-thrower, and 5 - lasers, while the latter offer four different types of bomb: F - swirling fireballs, W - deadly water drops, B - mini tornadoes things, and T - lightning bomb. 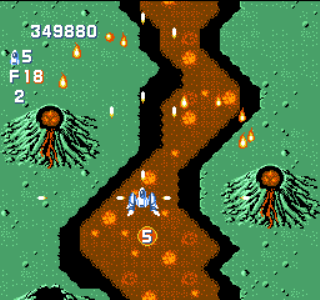 There may be four different bombs but they all do pretty much the same thing - they wibble explodey stuff around the screen for a few seconds, taking out or damaging the enemies, and they also reduce your main weapon fire to its most basic form while they're doing it. The weapons are more interesting though and are quite varied. They can also be gradually powered-up numerous times over by collecting the 'P' icons which are probably the most common collectible. As well as increasing their power, this also increases their range as well. Something else that does that is perhaps the most desirable power-up which bolts a sizeable wing to each side of your otherwise diminutive vessel. As well as looking cool, this beefs up your chosen weapon even more as well. There's even more too - in addition to all this stuff for your ship, there are also lots of money bags which can be spent at the shop found between stages. This offers nothing that isn't abundant in-game already though (weapons, bombs, etc) so its purpose is slightly strange or perhaps even mysterious. 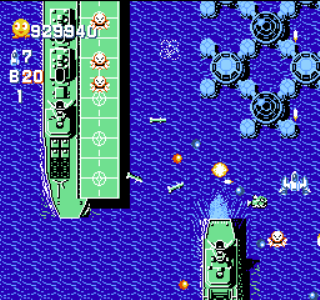 I guess it doesn't hurt to have the option though. Talking of options, the config screen (or 'Gun Nac Control Room') has a couple of unusual choices too. As well as offering a sound test and four difficulty levels, you can also turn 'ricochet of bullets' on or off, and you can prioritise 'speed' or 'sprite'. The former, when turned on, sees all destroyed enemies fire a final bullet off at the moment of their destruction (which obviously then means there are many more to dodge) but the latter option is even more unusual. Compile were apparently aware that the NES would struggle to cope with all the ships and bullets and everything that it had to throw around the screen so you can ensure the game runs fairly quickly and smoothly by choosing the 'speed' option. The alternative is a busier game but one that suffers from occasional slow-down as well. It's a novel concept for sure, and one I don't recall seeing anywhere else. At the same time, though, as decent as Gun-Nac is, it doesn't really strike me as being such a demanding game as to really need it. 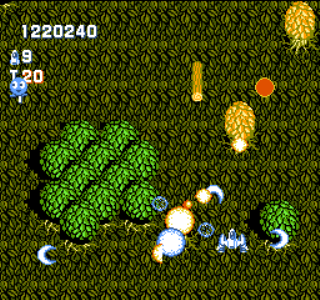 There are quite a few ships and bullets zipping around the screen, admittedly, and most of them are fairly detailed too, but even with the game speed prioritised there's still quite a bit of sprite-flicker. This is also far from the most colourful NES game I've played. The backgrounds are awash with various greens and blues but not many other colours - some stages even reminded me of monochrome Speccy games! If you don't tire of the same few colours though, Gun-Nac is a nice enough looking game and includes some great weapon effects. It's also a nice enough sounding game with lots of varied effects, pleasant tunes, and even a very familiar 'extra life' jingle! It's a jingle you'll hear quite often too, actually, but it's not for this reason that this has turned out to be the easiest shmup I've played for a while. The main reason for this is the homing weapon which not only seeks out enemies as efficiently as you would expect, but it's also sufficiently powerful that you don't really have to do much else but hold down the fire button and dodge the few bullets that head your way, which isn't always that many as some of those are can also be shot! 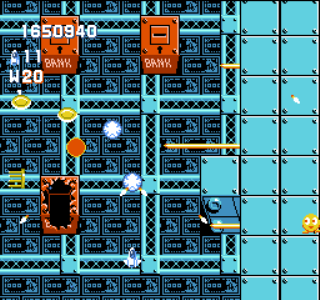 This is even true during some of the boss battles. Each stage has a mid-boss as well as an end boss, you see, but few are particularly challenging. One of the game's biggest challenges can actually be having to try and avoid weapon icons that you don't want! Things do obviously get tougher as you progress but even me - a far from skilled gamer - managed to get to stage four without dying (I even amassed a stockpile of 11 lives while doing so!). Compile have apparently tried to compensate for these generous features by adding a few 'shot-blockers' on some stages as well as stripping you of all your power-ups when you die (which basically makes it a 'one life game') but it's still too easy really. It can be a very enjoyable game, one of the best of its type on the NES in fact, but only if you avoid the temptation of playing with the default settings. Try turning the difficulty up, turning ricochet on, and avoiding the homing weapon (and probably the multi-directional shot as well) though, and Gun-Nac begins to show why it's often regarded as a real hidden gem for the NES.