The adventures of the Next Generation crew have consistently improved season-by-season so far, with the last season ending with the series' first cliffhanger. Would the fourth season continue this encouraging trend? The answer is almost certainly a resounding 'yes' as far as most fans are concerned. The selection of episodes was the broadest yet and included an interesting glimpse of Picard's home.

The same episode also introduces Worf's adoptive human parents (whose affection makes him amusingly uncomfortable!) and he also soon discovers he has a 'surprise' son. Elsewhere, Troi whines about her senses as usual, Picard battles the Devil, Worf stuns us all by declaring that he is in fact "not a merry man", Dr Crusher almost becomes a lesbian, and Geordie nearly starts a war. There's also an intriguing episode called 'Clues' in which a xenophobic species attempts to trick the Enterprise crew into not realising they exist!

As much as I enjoyed this episode, however, it didn't quite make the cut. Here, therefore, are my choices for the best of season four:

Best of Both Worlds Part 2 (Episode 1) 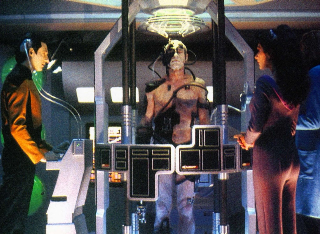 Well, it was surely among the most painstaking waits in Trek history, but we finally got to find out what happened after Riker gave the order to 'FIRE!' and it was... a big fat nothing. A nothing after which the Borg vessel sped toward Earth with Locutus in tow, ready to blow the crap out of us. Luckily for all, 'Captain' Riker manages to patch up the knackered Enterprise and give chase only to find a huge debris field consisting of what was Federation ships. Oh nooo! :( And all done by one measly Borg 'Cube' too! Of course, the pesky cybernetic freaks get theirs in the end, but at great cost to our stupid, ill-prepared Starfleet. It wasn't all bad though - this encounter apparently led to the construction of the Defiant, the only decent Federation ship, and the episode has gone on to be regarded as not only one of the best TNG episodes but one of the great sci-fi episodes full stop. Although if this kind of thing happened for real, it's hard to imagine the captain in question going straight back to work as though nothing happened. Still, I guess that's what the episode two was for (which was another good one)... 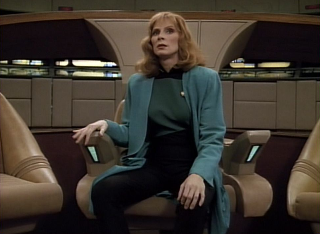 Perhaps it's a little harsh but most fans would probably agree that not too many of Dr Crusher's episodes are among TNG's best. However, this is one that I've always found enjoyable and it begins with the Enterprise docked at a Starbase where the delightful redhead is pleased to catch up with her old friend and mentor. Before long, though, he's disappeared from the ship and there's no record of him ever having been aboard. Jeepers! The rest of the bemused crew help her look for him anyway, but gradually they begin disappearing one by one as well, with the ship continuing to insist the absent crew members have never been assigned to it. Things all get worked out in the end thanks to that splendid fellow, the Traveller (as well as super-kid, Wesley, obviously), but despite the fact that this is the kind of episode which wouldn't really diminish the overall quality of TNG by its absence, I'd still happily sit through it again. 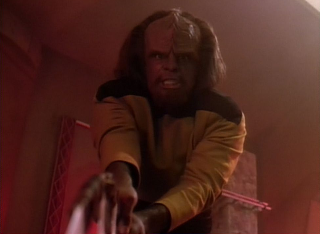 Hooray, another Klingon episode! As its name suggests, Reunion is a sequel of sorts to season two's The Emmisary and season three's Sins of the Father as well, and features the return of K'Ehleyr, Worf's former shagpiece, who's brought with her a young Klingon child. Never heard of protection then Worf? (chortle) It's not just this pasty-headed oaf who's got problems though - Chancellor K'mpec, leader of the Klingon Empire has been poisoned, leading to a power-struggle between the treacherous Duras and the scary Gowron for the right to replace him. As if that wasn't enough, K'mpec unexpectedly appoints Captain Picard as Arbiter of Succession just before dying. The violence and back-stabbing of Klingon 'politics' is always entertaining to see but on this occasion it's accompanied by the highly amusing disgust shown by the other Klingons at the mere presence of the disgraced Worf, although as you might guess from the picture included here, his Federation-instilled diplomacy doesn't last long! 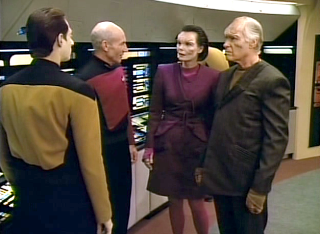 I'm not sure why but I think this is the TNG episode I've seen more than any other. Luckily it's a good one. It's nothing to do with the celebrated movie featuring those Borg nincompoops though - it features a much more civilised form of First Contact, initiated by the ever-noble Starfleet who do the same with any civilisation that achieves warp capability. On this occasion, however, one of their 'ground reconnaissance' operatives (Riker, obviously) has been injured and taken to hospital, and it doesn't take them long to realise he's not a native. As well as causing one of the nurses to get all horny, this also means Picard has to hastily move the process forward by revealing himself to the Malcorians. Their leader is cautious but friendly and their Science Minister excitedly welcomes them, but the Security Minister reacts with fear and suspicion and refuses to release Riker. I think the appeal of this episode partly comes from the sense of wonder felt by the emerging species upon seeing the Enterprise and its technology. It would be pretty cool to see it, but perhaps even cooler to be the ones showing it off... 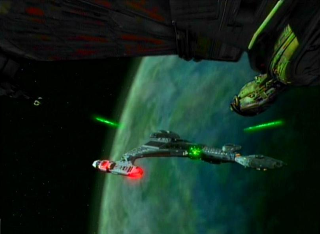 And after a half-season break, the convoluted situation regarding the leadership of the Klingon Empire is visited again here in the first of a great two-parter. This time, the Enterprise is called to Qo'noS so Picard, as Arbiter of Succession, can complete the installation of Gowron as leader of the almighty High Council. But wait... there's a challenger to Gowron's position - the weedy Toral, illegitimate son of the cretinous Duras who's being controlled by his two cleavage-displaying aunties, Lursa and B'Etor! This of course leads to a division of the Klingons - followers of Gowron and Duras - and a potential civil war. Worf then leaves his position on the Enterprise to join his brother, Kurn, in support of Gowron who has vowed to restore their family name. All the while, the Romulans seek to gain an advantage over their squabbling neighbours and may even be directly influencing events by way of a female operative working with the Duras sisters who bears an uncanny resemblance to Tasha Yar. Not quite the cliffhanger we had last season but it's a fantastic episode all the same...

Look out for my Season Five picks soon!