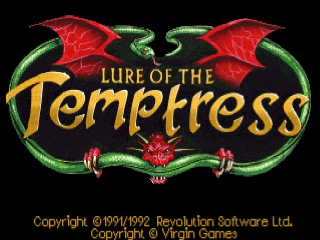 I imagine it's pretty obvious to any regular readers I may have here at Red Parsley that I tend to favour certain game genres over others but I'd like to think there are at least a few examples of all genres that I've enjoyed at one time or another. Then I remember point 'n' click adventures. Fans of these games speak very passionately on the subject but the few examples I've tried have never really 'clicked' with me (har har har!). As with so many other game-related things, however, this mighty fine blog is here to provide me with the prod that I apparently need to give them another try. This first one I've chosen is one I remember from my Amiga days (I think I even had a copy), as well as by the sultry minx who adorned most of the promotional material. It's actually free to download and play now and it's as a result of this that I encountered it thanks to those splendid chaps at Good Old Games who gave me a copy complete with a built-in DOS emulator!

Like many such games of this type, Lure of the Temptress is set in the days of yore so filled with kings, their castles, brave knights, their courageous acts, and tales of the terrible evils that dwelt therein. In this particular case you're cast in the role of a peasant by the name of Diermot who was happy minding his own business as the kingdom around him was preyed upon by interlopers - man eating orc things called Skorl, apparently rallied by a beautiful young enchantress by the name of Selena from the far off town of Turnvale. Despite his best efforts to flee, Diermot is drawn into a battle alongside the King's guard against the aggressive Skorl horde during which the King is slain. Diermot survives but is toppled from his horse and knocked unconscious. When he comes around he finds himself a prisoner in Turnvale's squalid dungeons.

Unsurprisingly it's from here that control of Diermot is turned over to you and your mouse. First he must escape his prison cell which is a fairly straightforward affair given the apparent stupidity of the Skorl buffoons. Then he needs to find a way out of the dungeon itself which houses two other prisoners. One is near death but may have some valuable information for you - if you give him some water to help him find his voice before he kicks the big one - while the other is a cheerful peasant by the name of Ratpouch who, if you rescue him, will thereafter become your servant, following you around and doing as you tell him. He proves immediately useful too, as he seems to know of a way to escape the dungeon. If this vital early goal is achieved you'll soon find yourself in the 'town' where a majority of the game takes place.

Once you're here you might think that you'll need to get cracking with overthrowing the big-boobed 'temptress' but, of course, it's not quite that simple. Where do you start? Well, and this is purely for the benefit of other newcomers to this genre (like me!), first you'll need to obtain information. This is mainly done by talking to the other people you'll encounter simply by clicking on them. Many clues can be found this way and some of the mostly-friendly locals will give you items as well, or indeed mention that they need a particular item that you might find elsewhere. It's necessary to talk to at least some of the people in the game, too, in order to open up dialogue options (and you do get the odd choice of things to say). Moving Diermot around is simple enough - you can simply point to a spot and click; if he can move there he will. The town, which includes various buildings that you can enter (pubs, shops, blacksmith, etc) as well as streets, and all other areas of the game consist of single screens from which you can move between in one, two, three, or even all four directions.

Some screens are merely intended for passing through and on others it will be obvious what you need to do, but some are less clear. If there is anything you can interact with on the screen the mouse arrow will change to a crosshair and allow you to click on it. Choices of commands depend on what the object/person is. You can 'open' and 'close' a door, for example, while most other items will allow you to 'get' or 'operate' them. Every situation is catered for though - your only job is to work out where to go and what stuff/people to click on while there. This was not really something that came naturally to a seasoned arcade-gamer like me and for some reason I wasn't hugely enthusiastic, but I gave it my best shot anyway. Sadly, however, I can say with some confidence that my appreciation of point 'n' clickers has not begun with this title. It's my understanding that games like this rely on creating a captivating atmosphere to ensure committed play. On this front, Lure of the Temptress hasn't really been a roaring success for me.

The graphics are quite pleasing, consisting of attractively-drawn buildings and locales (although there's practically no animation) and the characters are reasonably distinctive considering their size, but the audio is less impressive - understandable for a DOS game that's now more than twenty years old I suppose, but playing it is a near-silent experience. Silence itself can create atmosphere, of course, if handled in the right way, but that would require a tense, gripping story filled with spooky characters and lots of scary stuff. Those qualities aren't prevalent here though. The townsfolk, and even the monstrous Skorl themselves, can simply be found ambling around the town going about their business and burbling their generic dialogue - hardly the chaotic war/occupation depicted in the otherwise-decent intro sequence. There's a bigger problem than the lack of a captivating story/atmosphere, though.

As mentioned previously, moving Diermot around is a simple process, but it's not always effective. I quite often had trouble trying to make him go where I wanted - half the time he just seemed to be stumbling around on his own while I was furiously clicking away! It's also easy for the other characters to get in his way, especially Ratpouch, your 'loyal servant' who follows you through most of the game. He's a good idea in principal but he doesn't actually do a great deal besides get in the way! I also encountered a bug where he got stuck between two screens and therefore couldn't follow me around (the reason he's not in most of the screenshots). Despite its faults it's not a terrible game at all though, it's just all a bit boring. I was happy to play it in short bursts - maybe 10-15 minutes at a time (luckily you can save at any time), but sadly I lost interest/patience if I spent too long with it, and playing through it for a second time would be a chore too much for me. I've been left with a sense that I will find a point 'n' clicker I like, but I'm afraid Lure of the Temptress isn't it.