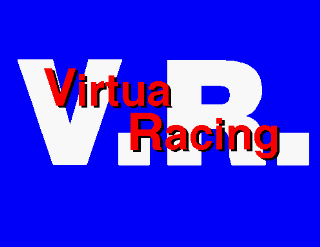 Developers have been flirting and experimenting with 3D graphics in video games since almost as long as they have existed. Atari's vector games of the early 80's like Star Wars and Battlezone were quite convincing for their time, for example, and the home systems didn't miss out either. Innovative titles like 3D Monster Maze on the humble ZX81, the isometrically-viewed games on the Speccy like Knightlore and Head Over Heels, and Incentive Software's superb Freescape games delighted early home computer users before the more powerful 16-bit machines gave us games like Starglider and Carrier Command. These games were all exceptions to the norm though - as we know, 3D graphics in games didn't become standard until the mid-90's and most would say that 'revolution' began with Sega and their 'Virtua' series of games which began in 1992 with the remarkable Virtua Racing. 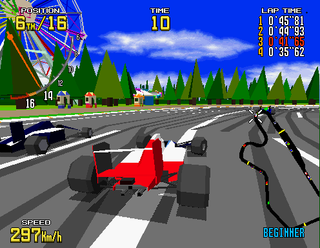 Okay, it wasn't the first polygonal arcade racer - Hard Drivin' and Winning Run are both examples of titles that beat Sega to the punch, and by quite a few years actually, but it was the first such title I recall that really wowed gamers and critics alike and kick-started the fascination with 'polygons per second' and all that stuff. It's also the game that established the trusty format that many of Sega's subsequent racing games would follow. Accordingly, you have the choice of manual or automatic transmission and three courses - Big Forest (beginner), Bay Bridge (medium), or the sizeable Acropolis (expert). You start each race at the back of the grid (shocking, I know) which consists of sixteen cars in total. You'll then have up to five laps with which to carve your way through as much of the field as possible, although there are numerous check-points around each circuit and a rather fairly time-limit. 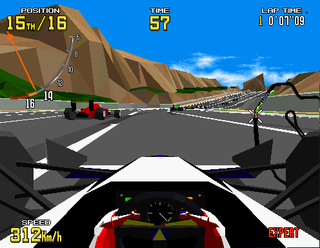 Although running off the track can cause your car to spin, the fragility of F1 cars has otherwise been ignored meaning glancing impacts with barriers and other cars merely slow you down. You can even continue from high-speed crashes after your car has flipped and twirled like an Olympic diver for a few seconds! It's basic stuff, even for an arcade racing game, so it's probably not too surprising to learn that this wasn't even intended to be a full game originally, just a tech demo to show off the abilities of the swanky 'Model 1' board. However, the results were so encouraging that it was released as a full game after all. It was still all about the graphics though, and indeed they must've been impressive in their day, but what about now? I was never fortunate enough to happen upon a Virtua Racing machine all those years ago so this has been my first real chance to find out just how good this famous game is. 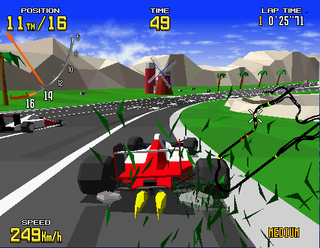 To be honest, despite the fuss it caused on its release, I was half-expecting a super basic, pop-up riddled affair with sluggish controls but, much to my delight, this has not proven to be correct! The polygons are not textured and there is occasionally some pop-up if you start flipping and spinning, but under normal circumstances the graphics hold up really well today. It runs at an impressive 60fps for one thing, which means it can be pretty fast, and the cars and roadside objects look very 'solid' too. The latter mostly consist of barriers and trees but there are a couple of nice bridges to race across, a tunnel, and a fun fair to distract you as well. This game is also where Sega's 'VR View System' debuted which gives you four different 'cameras' from which to enjoy the action including a good in-car view. There's even some 'special effects' too, such as flaming exhausts, tyre smoke, sparks and dust from the back of your car, flying blades of grass when you run off the course, and - my favourite of all - some superb 'camera' vibration when racing at high speed. 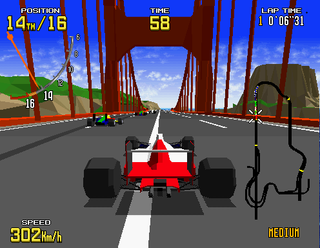 From what I've seen of in-car F1 footage from that time, this has been done pretty realistically here and it really makes a difference to the realism and tension of races. The sound isn't so hot, consisting of the usual announcer, quiet but decent background music, and a reasonable engine sound, but this does little to impact the enjoyment of this surprisingly splendid game. The controls are responsive and intuitive too, and you can even powerslide your car! Like most arcade racers there aren't many courses here (although the home conversions rectified this) but the three we do get are nicely designed, featuring the usual sweeping corners, chicanes, and the odd hairpin, but none are too easy or too hard and the races are challenging but not impossible. There's really not anything bad about Virtua Racing and that's come as a very pleasant surprise. Still not sure why Sega dropped the 'l' from 'virtual' though.