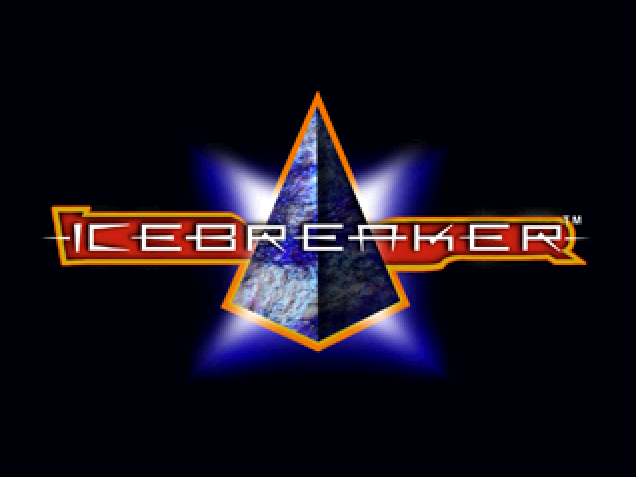 I got my first 3DO whilst it was still a 'current' system and, thanks to its failure and the subsequent price reductions, I was also able to buy most of the games I wanted for it quite quickly too, but one that I was not able to was Icebreaker. It was described by magazines of the day as a puzzle game and the few screen shots I'd seen were quite intriguing, but I was never able to find it anywhere, not even mail order (which was the last resort in those days). So, once again, this fine blog gives me the chance to finally tick another box, so to speak, and the first thing I noticed when I did finally get to play it is that it's not really a puzzle game at all. It's more of a action/strategy mixture, and it's quite an unusual one at that. The emphasis, you see, is very much on pyramids. There's no back-story to speak of so it's difficult to know how or why they came to be, but there are a lot of them.

The game is spread over a mighty impressive 150 levels and, while any of them can be selected from the 'level grid' at any time, there is also a handy tutorial, demo mode, and a random level option as well. They are viewed from an isometric perspective and the objective on each is the same - simply clear them of pyramids of which there are many different types. One of them is white and is the only thing that's under the player's control. It can be moved around the play-field in any direction and can shoot fireballs without limit. Another type of pyramid is the 'Seeker'. These can move around in much the same way as your own pyramid and generally home in on your current position, causing instant death if they touch 'Whitey'. You can destroy them easily enough with fireballs each but they quickly respawn at the outer edge of the play-field. All the other pyramids are stationary and are laid out across the stage (about two screens wide and tall, on average) on a grid, one per square.

The most basic and usually most numerous ones are blue. These are harmless and are smashed simply by moving into them. Probably the next most common type are the red ones but these need to be shot and will cause instant death if you touch them. Another type of pyramid is green and these can't be destroyed by your Whitey, only by the Seekers, so you need to lure them into their path. Later on in the game, these blue, red, and green pyramids can change colour too. There are a few other colours though, including purple ones which can be shot but leave a bottomless pit behind when destroyed, grey (concrete) ones which take multiple shots to put down, or a rainbow-coloured variety which will turn into one of the other pyramids when shot, even a Seeker. There are several kinds of Seekers too, which are differentiated by their colour, with some proving faster and/or smarter than others.

Despite all this, though, upon first playing Icebreaker I didn't think a great deal of it, and there are several reasons for that. The first thing I noticed was that the visuals weren't great. Aside from a few rendered level intros, the vast power of the 3DO is barely hinted at, and the audio is disappointing too, especially considering most of the developers at this time were excitedly getting carried away with the new possibilities the CD-ROM format offered. Here, there are a few effects and a quiet rhythmic back-ground 'tune' but it's all immediately forgettable. Other than the aesthetics, I also found it to be easy, a bit boring, and not very interesting to play. Even the name doesn't make sense - Icebreaker features very little ice and you aren't even able to break what there is! My initially deflated impression of the game soon changed, however, once I'd spent some time playing it.

The graphics may not be too good technically, but I soon started to appreciate the neat geometry of the stages, but unquestionably the best thing about the game is the large number and variety of the stages. The first one consists of a largely featureless green (grassy?) play-field surrounded by an infinite brown wasteland but, as I quickly discovered, none of the 150 levels look the same. They are all named and many are themed such as the volcanic and icy stages above (and yes, it is slippery!) and almost all of them feature hazards of some sort, usually one particular example per stage, such as the lava, slime, whirlpools, or bottomless pits, all of which will bring your strange pyramid clearing quest to an abrupt conclusion. It can be a pretty tough and unforgiving game too - you don't get any lives - if you touch a red pyramid or a Seeker, or fall foul of any other hazard, it's an instant game over.

Luckily it's also a highly addictive game as well. Every time I met an untimely end I thought "Right, I'll do it this time!" and immediately replayed the level in question, and eventually you probably will do it too - it's not an impossible game, just a tricky one. Splendidly, there is no time limit either, so you shouldn't get rushed into making a mistake. The controls are a little hit 'n' miss - the response time for changing direction and shooting is fine but moving Whitey around doesn't always feel as precise as it should do considering how little space you sometimes have, and since there is no scoring system it's debatable how often you'll return to each level once you've cleared it. There are four difficulties to complete each of them with though, and the sheer number of stages means it should last you a long while anyway. Things may have looked shaky to start with but I've enjoyed playing Icebreaker a lot. Ignore the 16-bit-esque aesthetics and give it a try.

Gameplay Video: Here's a look at one of Icebreaker's levels. Hitch-Hikers Guide To The Galaxy fans should know why I picked level 42 ;)