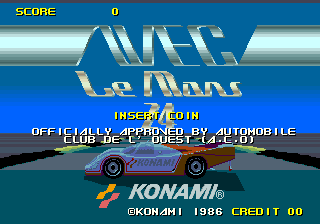 There are many things about most games that can help to make them memorable other than simply being really good. As far as WEC Le Mans is concerned, that was achieved in two ways, for me at least. First, by featuring that supremely lovely Porsche (a 962 if I'm not mistaken) with its distinctive Dunlop livery on all its promotional materials (which, ironically, was not used in-game), and second, by housing the arcade version in a large, round (not to mention rather bulbous) simulatory machine that actually spun players around in accordance with the on-screen action. But is the game actually any good? This was something I didn't really know until recently as I'd spent far more time remembering its adverts and giant twirly machine than actually playing it, and that's odd since it was part of the fine selection in my local arcade at the time, and a fairly decent version (supposedly) was also available for my trusty Speccy. Ooof! Time for this fine blog to save the day once again.

Unsurprisingly, the game is based on the famous annual race around the Le Mans circuit in France and, while it's obviously not identical, it's not a bad approximation. You start the race from the back of the grid but that doesn't really matter as there are no race positions. The idea is simply to keep going for as long as you can before the timer runs down. Winning the race and therefore the game is achieved by completing four laps of the circuit, and that's not as easy as it might sound. The circuit isn't a particularly tough one. It has a reasonably hilly, undulating profile with a few hairpins and a couple of chicanes but the straights are mostly connected by fairly manageable corners, and a reasonable lap should be just under the two-minute mark. What makes it tough is a strict time limit, topped-up only by passing one of the three checkpoints (including the start/finish line), and the other racers of whom there are an irritatingly-large number.

Unusually for an arcade racer, our friends at Konami have apparently attempted a more simulatory kind of approach here, rather than the traditionally unrealistic arcade style. That doesn't mean there's no traction control and tonnes of gears and all the hardcore stuff found in racing games today - if you stay on the road and don't hit anything you shouldn't find the going too tough - but you will need to actually use the brakes, low/hi gears, and counter-steering fairly often, and if you veer off course or touch any other cars or roadside objects, you'll spin out or flip wildly through the air depending on how fast you were going. Neither outcome is ideal when you have so few seconds to reach the next checkpoint, and you can't even coast across the line as with some other racing games either! The circuit is three lanes wide throughout which might sound like ample space but the other racers move around as much as you probably will.

They often makes mistakes as well as you, too - try avoiding a pair of them clashing and then spinning right in front of you! This kind of thing is probably my favourite thing about the game actually - it's not something that was common in the mid-80's. Graphically the game is pretty impressive too. There is certainly no OutRun-style variety in the backgrounds but the cars all look great (even if the cool livery is gone) and the scaling and draw distance is good too. Even more impressive is the change in colours as the hours of the (somewhat accelerated) 24 hour race advance. The sound is disappointing, consisting of a few bits of speech, the usual tyre-screeching effects, and a quiet tune, but overall this is a pretty decent game for players looking for a bit more challenge than usual. There is just the one circuit so its not ideal for home use, but if you're lucky enough to find the distinctive arcade version, it's definitely worth a whirl (literally!).