Most of my posts in this series of features have relayed my many happy years with the console or computer in question but the previous one, a few months ago now, was a little different. It was regarding my tenure as a Game Boy owner which, sadly and for reasons I'm not really able to fathom, I owned only for a rather brief period. Looking back now I find it strange, then, that a decade or so later I decided to give Nintendo's by now-ultra successful handheld another chance. 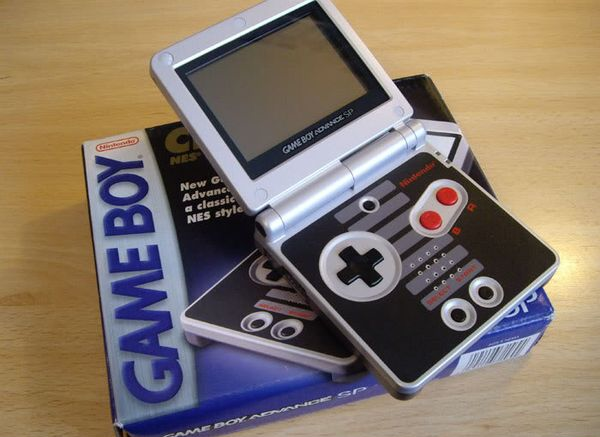 By now the Game Boy was a bit old hat though, so I figured I'd instead go for the newer, fancier Game Boy Advance, and if I was going to do that I might as well get the very latest model which was at the time the 'SP'. In fact, if I'm honest, it was the recent news of some limited edition versions of the SP that really swayed me (as well as a very brief encounter with an old friend's GBA which I saw running a Street Fighter Alpha game rather impressively) and I duly sought out and purchased the one that most appealed to me - an 'NES Classics' model whose colour scheme was based on... the NES, believe it or not. As can plainly be seen in the picture here, it was certainly a great looking device, resembling an NES controller when open and an NES console itself when closed. This made it a lovely item for my collection but would I spend any more time using it than I did its predecessor?

As it would turn out, no I wouldn't. This may vex some of you, and justifiably so, but believe me - it vexed no one more than I. It was a fantastic little machine; it looked nice, it was a genuine pocket gaming device, the batteries were rechargeable and lasted ages. It should've been perfect for such a long-time gaming fanatic like me, especially one who spent as much time on the bus/train/toilet (don't ask) as I did. Perhaps I was still traumatised by the failure of my beloved Dreamcast, or perhaps I was still spending most of my gaming time using it - I really can't remember. All I do remember is that, much like my brief time with the original Game Boy, I only ever had one game for it. At least it was an appropriate one I suppose... 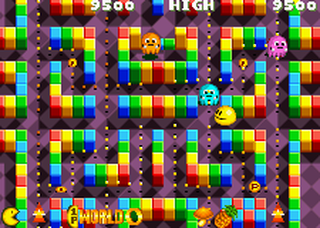 Perhaps the most appropriate for a retro buffoon like me too! I hadn't read up on this title beforehand either, I bought it purely because it had 'Pac-Man' in its name. As it turned out, though, it was rather a cool little title. It featured four games starring our favourite yellow pill-popper - the original Pac-Man, the isometric Pac-Mania, the falling block puzzler Pac-Attack, and last but not least, my favourite of the four - Pac-Man Arrangement. Just looking at this this colourful screen shot makes me want to play it again actually! In case you haven't played it before, it's basically the same as the original but set over six themed worlds and includes several power-up items as well as features such as dash arrows and warp gates. All four games here are great fun though, and as a package it was good value and very well suited to the GBA too. Not quite sure why I got rid of it now...

Once again then, despite being a great bit of kit - everything a handheld should be really - Nintendo still failed to ensnare me, and I've no idea why. It's possible, just possible, that when I had the original Game Boy I was still suffering from Sega fanboy syndrome, a condition which in those days meant Nintendo was the enemy. That's one (admittedly stupid) reason I've recently realised could explain my aversion to that handheld, but it was definitely no longer the case by the time the Advance was released - I had (and loved) the SNES and N64 by this point - and it also arguably featured games more to my particular tastes than its predecessors as well, so I'm more at a loss than ever to offer any kind of explanation.

These two incidents, perhaps more than anything else, are why I've never invested in Nintendo's DS. I keep seeing so many great-looking games on it including some superb retro-ish sequels/updates, many of which are exclusives, and I long to play many of them, but... what if it happens again? Dare I take the chance? I suppose it could be worth it just to warble on about it here if nothing else but, assuming I do take the plunge, I really hope I develop an affinity with it this time.