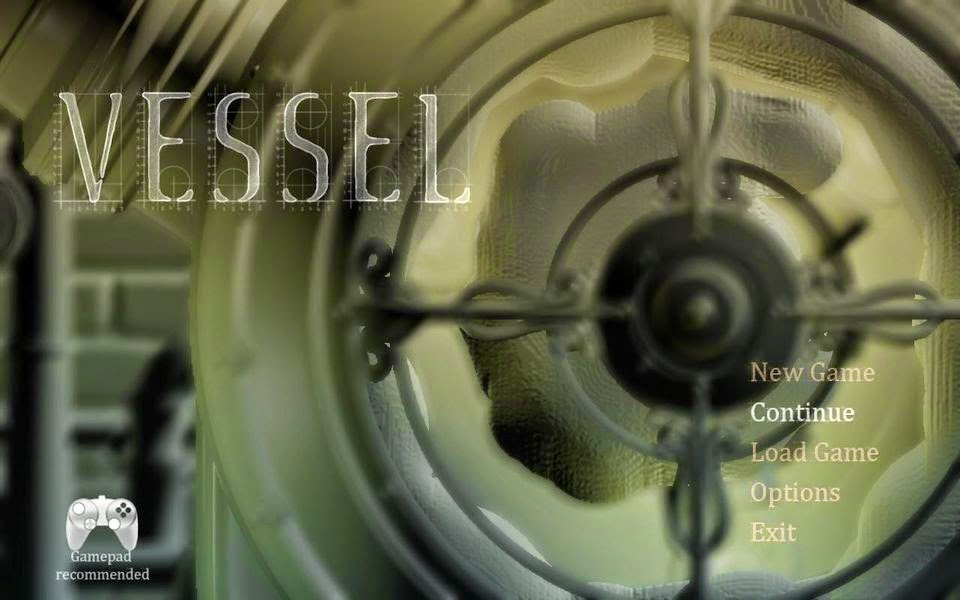 There doesn't really seem to be a massive amount of games starring genius/mad scientists but most of the ones that are around seem to be platformy puzzle games. One of my favourite such examples is the Amiga game, Morph, but Vessel, while further proof of my theory, is quite a bit different. It's a game I recently happened upon via PSN and is a port of a game I've now discovered was released a full two years earlier in it's original PC incarnation. Not sure what the delay was as it seems to be pretty much the same game, and that's one starring M. Arkwright, an inventor who has created a type of splooshy liquid automaton called the Fluro (fluid robot). They were supposed to take over all the laborious monkey jobs that us lazy humans can't be arsed to do but, unsurprisingly, they soon had other ideas.

Instead they have run amok in the steampunk-inspired environment in which the game is set, causing the world's machinery to malfunction. It's therefore your job as Arkwright to reverse all the damage by fixing the various contraptions which are found through the four main areas that make up the game - Under the Workshop, The Factory, The Orchard, and The Mines. Each of these is divided into numerous scrolling stages - between ten and twenty depending on the area - and each of these mostly consists of a succession of smaller sections featuring a puzzle and a locked door. They are usually one or two screens wide and/or tall and generally feature various platforms linked by ladders, as well as the machinery itself, of course. Simply solve the not-always-obvious puzzle (or puzzles) to unlock the door and move on to the next section!

The puzzles themselves take many forms but often include switches. Some merely need to be pressed to open the exit but others need to be held down. This is where the pesky Fluros come in. Despite their previously anarchic behaviour they are still apparently quite helpful and they can actually be created while playing. There are machines that, once activated, will fashion one, but they can also be created with a mixture of water and a Fluro 'seed'. In the first few areas, once they're up and about they'll generally head for the nearest switch and stand on it, which is jolly decent of them, and this alone is often the basis of early puzzles. They're easily destroyed though, by nearby machines or even just by running into them which causes them to collapse into a splooshy puddle (complete with eyes!), and indeed, in keeping with this watery theme, most of the puzzles involve water in one way or another.

Of course, standing on switches is not all the Fluros can do. Several different kinds are introduced as you make progress including some which chase after you and others which attract water like a magnet. Also, despite being so prevalent early on, water isn't the only liquid to be found here either. Later on you'll encounter lava and various colours of gloopy slime stuff, and there are Fluro equivalents for manipulating all of it. The puzzles are quite simple to begin with but they soon start requiring a bit more brain power. The game world is interspersed with journal entries by Arkwright which explain any new items or techniques you need to learn, but even so, there's not generally much of an indication that you're doing something right or wrong.

Well, not too much other than the ability to progress (or the inability, perhaps), obviously, but it doesn't take long before you learn what kind of thing to look out for - cogs, wheels, spouts, switches, lights, etc. You'll need to learn too, as, in what's probably the game's biggest fault, it's often not easy to see... well, much at all really, due to the graphical style used. The sizeable locations are superbly drawn, both backgrounds and foregrounds, as are the few sprites and various fluids. The lighting effects are fantastic too, and the view zooms in and out very nicely depending on how fast you're running or the size of the section or puzzle in general, but much of the game is so dark and gloomy. This was presumably done for atmosphere, and I guess it works, but it also frequently makes it annoyingly hard to even see what's on the screen!

Some areas are a bit ridiculous to be honest. More than a few times I've been stumbling around, barely able to even see Arkwright, never mind be able to see where I can move him. It's not like this for the whole game though, and the only bright, colourful area - the Orchard level - is particularly gorgeous. It's also a fairly quiet game. The few sound effects, such as Arkwright's footsteps on various surfaces and the clanking and squeaking of the machines are great, and the background music literally is that - unobtrusive ambient tunes which are sometimes barely audible, but they suit the game pretty well too. There are faults with the aesthetics, chiefly the aforementioned darkness, but they do also give the game a good - and rather unique - atmosphere.

The learning curve is also graded well. At first the puzzles are simple enough and just require a bit of clambering around, and many of them have more than one solution, giving you the freedom to solve them as you see fit, but later on things get much more complicated as you would expect, and you'll soon find yourself running around frantically trying to keep all sorts of things going simultaneously. The Fluros can occasionally cause a few problems here though. Even though they're 'intelligent' they aren't completely reliable and don't always do what you want/expect, but they're not too bad really, and it helps to have a realistic physics engine which is impressive in how it portrays gravity and the movement/behaviour of the various liquids, and that helps make it genuinely satisfying to crack the puzzles. Vessel is a bit of a slow-burner but if you give it some time and don't mind its gloomy visuals, it's innovative, challenging, and enjoyable enough to have you hooked for a good while.

Special Note: the screenshots above are from the PC version of the game as finding decent and untagged shots of the PS3 version was as much trouble as it is for pretty much any modern game. As far as my old eyes can tell, it looks the same as the PS3 version though. Thanks to the splendid Steam community!