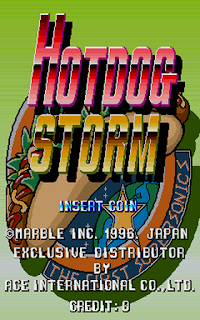 As I'm sure everyone in the world already knows, hot dogs are well lush. I eat them regularly. I even have special spicy crunchy sprinkles with which to garnish them. Mmmmm, I have some in the fridge right now actually, maybe I'll go have some. Yes, why not? Any time is a good time for hot dogs after all! Hmmm, anyway, sorry about that, I seem to have lost my train of thought. Something must've reminded me of hot dogs for some reason, but on with this review which is of... Hotdog Storm? Ohhh yeah, I remember now! Well, despite the mouth-watering distraction, this is a game that apparently has precious little to do with fast food, name (and awesome title screen image) notwithstanding. In fact, it's a totally bog-standard vertical-scroller. If it has a backstory I'll be a purple feathered ostrich if I know what it is, but it's a short game, featuring only five stages of action between you and... whatever victory promises. 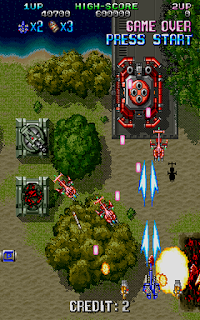 Everything will look immediately familiar from the off too. There's only the one craft available, which is no doubt an 'advanced prototype', and it comes armed with a twin forward shot and three bombs. The enemies are a mixture of ground-based and airborne varieties and include tanks of various types and sizes, swarms of choppers, and various larger/slower attack craft. As well as leaving lightnings behind for bonus points, various other power-ups emerge from the explosions of destroyed enemies too. There are 'P' icons which gradually increase the power of your forward shot, more bombs, and several coloured icons - blue ones also beef up your main shot while the others provide drones equipped with their own weapons - short range power shots, lasers, or missiles for green, red, and orange icons accordingly. The playfield is slightly over one screen wide and boss fights mark the end of each stage. 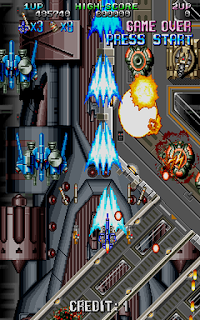 And that's about it! It follows a formula laid down by many games before it and it doesn't offer anything new of its own, but is that necessarily a bad thing? What matters more, many would say, is whether it does what it does well, and my reply to that would be... kind of. There's nothing actually bad here, it's just all very average. The graphics are decent enough, featuring some nice backgrounds ranging from the usual grassy/watery areas to enemy bases and the like and most of the sprite designs are okay. A few stand out while others are very generic but that's to be expected. The weapon effects and explosions are good too, but I can't help feeling it looks like a game several years older than it is. The same goes for the audio really. The spot effects and tunes aren't bad but you won't remember them ten minutes after playing. It's still a pretty enjoyable game to play though, while it lasts. 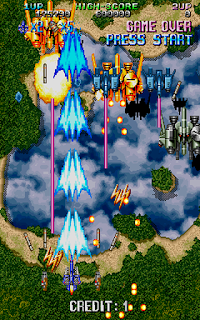 Ship movement is rather on the slow side and there are no speed-ups but the controls are fine and the difficulty level climbs fairly steadily. It's actually not all that tough to finish. Part of that is its length - it can be finished in under 30 minutes - but there are not too many really tough spots either. It has the occasional bullet-hell (ish) moment but some bullets can be shot (the pink ones) and your power-ups can be grabbed again straight after death, so it shouldn't take too many attempts for a seasoned shmupper to 1CC it. Once that's been done, however, it's unlikely you'll return to the game too much. That said, it does have a simultaneous two-player mode which is pretty cool. At the end of the day though, there's nothing here we haven't seen a million times before, and the lack of in-game hotdogs was disappointing too. It's a perfectly playable shooter, just a totally unspectacular, run-of-the-mill one.