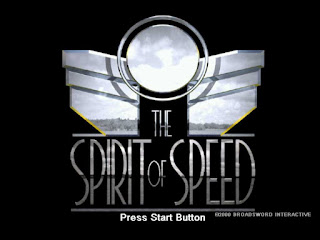 One of my favourite genres on the Dreamcast was that of driving games. There were many superb examples with several available early on, and I bought all but one of them. The one I didn't get, and indeed had never even played until recently, was Spirit of Speed. This was mainly due to the rather harsh reception it was met by upon its release. Actually, that's putting it mildly - I don't think I've ever seen a racing game get so consistently, mercilessly savaged by magazines, websites, and players the world over! Despite this, it's still a title that has always rather intrigued me. Not too many games give you the opportunity to race in classic old 1930's speedsters like the ones found here after all. Whilst possibly somewhat restrictive, it's also a unique premise. Besides, it can't be that bad, surely?

Sadly, I learned pretty quickly that it is. Things don't seem bad from the options screen - there are four play modes (Quick Race, Single Race, Championship, Scenario), 15 cars to choose from (mainly Alfa Romeos, Mercedes, and Bugattis), and 9 circuits to splutter and chug away on (in such locales as the US, UK, France, Italy, etc). That's not bad going for the day, but things go downhill swiftly when you start racing, whichever options you've previously selected. Firstly, it's really sluggish to get your car up to speed, and once you do they don't move very realistically, often skidding and spinning at the slightest provocation. Okay, it's not like I've driven one of these cars myself but it doesn't seem realistic at all. The main reason this is particularly bad here is because the computer-controlled cars are almost always faultless.

This is actually down to poor AI, it seems to me. The other racers, who are always CPU-controlled as the game is one-player only, drive with a single purpose: to win. And they do this as though controlled by... well, computers, driving to a set program. If you stray into their path they will try to go through you, lacking even the intelligence to steer around your meandering tub. Okay, one or two of them do occasionally make mistakes which allows you to regain some ground, but there's no way all of them will, and you simply won't be able to catch up the leaders if you make a single mistake at any point in the race. The races can be very long too, as you can't alter the number of laps. Some races are over within five minutes but some courses are so long that races can last as much as half an hour! That's a long time to not make a mistake.

That's assuming you even want to play for that long, regardless of how many races it is. Considering the title, the sensation of speed is pretty woeful. I know the cars are somewhat antiquated ones, but the game is called is the Spirit of Speed - you can't call a game that and then have it be anything but really speedy, surely? The graphics are quite poor elsewhere too, actually. Some of the courses have nice bits of scenery here and there but it's not so great from up close. Most of the road-side objects like trees and signs are just 2D sprites, and the attention to detail is disappointing. When using the in-car view there are no hands on the steering wheel and the wing mirrors don't work, for example, the tyre smoke is barely visible, and lord knows what's going on with the physics. The whole game looks rather drab and dull, unfortunately. 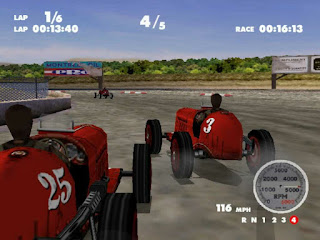 The audio is somehow even worse too. The title/options screen tune is quite jolly but there's no in-game music and the effects are poor, making races frankly rather boring. There are a few smaller problems too - the controls aren't great and I even encountered a weird issue with the auto gears where they kept shifting up and down, never letting me get above about 50mph (which was really helpful!). As you may have noticed, I'm struggling to find anything good to say about the game really. I suppose I did quite enjoy driving around some of the courses on occasion. Some of the locations are quite interesting, such as the Tripoli course which includes a dusty desert section and a tricky town section, and the legendary Donington circuit which was much simpler back then, almost rural, if the game is to be believed. 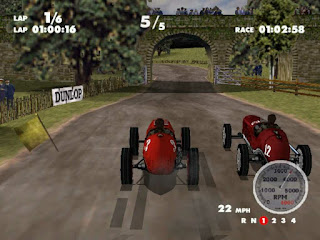 Even the tougher courses are not that hard to get around with a bit of practise, although you'll need to memorise them as there's no little course map during races. It's the unrelenting AI that makes the game so hard, and any period of enjoyment is quickly ruined by that or one of the game's many other faults, and it all starts to feel so trivial and futile. It really is quite disappointing to be honest. I wanted to like the game, at least a little bit, and I certainly didn't think it would be as bad as some of the reviews I've seen over the years, but I'm sorry to say it is. The novelty of racing in old fashioned racing cars really is the only lure here, but you'll soon tire of bouncing off the scenery and finishing in last place every time. It was a nice idea but some questionable decisions and poor execution all round has resulted in a bit of a stinker.

Gameplay Video: here's a somewhat stretched look at YouTube user, LewisLongshanks, navigating one of the more interesting and varied courses, located in Tripoli.