Oops, it's now been almost exactly a year since I went to California which means I am long overdue with this post (no surprise there I guess!). Anyway, having already revealed the wonders of Musée Mécanique generally, I thought I'd also take a quick look at the five games I spent the most time playing there (besides skee ball of course, which is the greatest thing ever). Here they are: 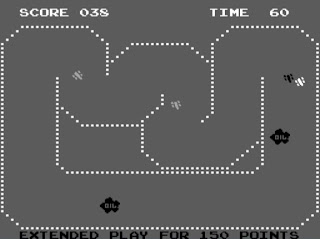 I've long been a fan of the splendid Super Sprint so it was a real thrill to find this, the original Sprint (the '2' denotes a two-player version) lurking amongst the more modern machines. Naturally I gave it a go and quickly found it... rather tough going. As you can see, the cars are teeny things but steering them around the circuits isn't too tough. The black and white graphics are tidy and the controls are smooth enough. What makes it tough is its mandatory 4-speed transmission. It's not always easy to constantly shift up and down in any normal racing game but it's even tougher here with ultra-concentration needed to get around within sight of the other cars. I guess I'd get used to it after a while but... jeez, I made a mess of it on this occasion (my ranking was 'granny' - boo hoo)! It was still wonderful to even have the chance to play it at all though - there can't be too many of these machines left at all, never mind ones working this flawlessly, and it does still play really well considering how old it is. 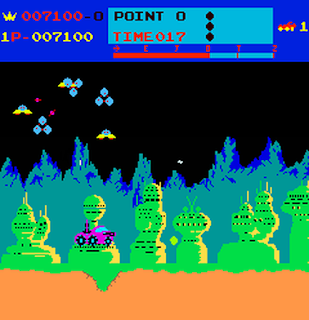 I soon zeroed in on this one in the museum as it's another of the early classics that I had never played, mainly because I had simply never seen it anywhere before then. It's a predictably simple game though, and it didn't take long to get the hang of it - you just need to jump the craters and holes as you pootle along in your moon buggy while shooting the alien attackers and avoiding their shots. The fact that the side-scrolling landscape moves automatically can make things a little tougher, and indeed my first few credits were over quickly, but soon I was trundling through stage after stage, almost making it through all five of them, and I had great fun while doing so too. The buggy isn't too agile but its jump is very controllable and the two-way cannon (forward, upwards) is ideal for taking out most of the terrors that lay before you (you can even shoot their bullets). Like many games of the time, it will loop back to the start if you get through all five stages so it's just a case of continuing for as long as possible. I'm not sure how much I like the choice of colours (magenta buggy over luminous green backgrounds?) but aside from that this is a great little game which I'm glad to have finally played. 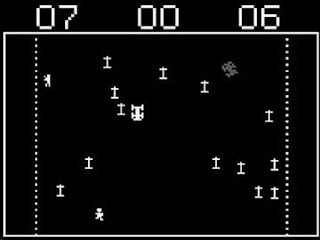 I may never have played either of the last two games but I'd at least heard of them. This one, however, was totally new to me but looked immediately interesting enough to warrant some credits, mainly due to its name and the scary grim reapers that adorn the cabinet so menacingly. Like Moon Patrol, it didn't take too much figuring out either - it's a single-screen top-down driving game of sorts where the aim is to run down as many people as possible. Or so it seemed but it turns out they are actually meant to be 'gremlins' or some nonsense. The effect is the same though, and it was a rather controversial game as a result - perhaps the very first. Nonetheless, it's good fun twisting this way and that, chasing the hapless 'gremlins' and avoiding the increasing numbers of tombstones, but the biggest thrill comes from simply being able to play it at all - there weren't many machines made even back then so finding a working one now is a real treat for any retro gamer. 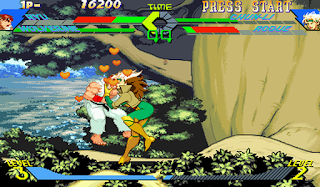 Rarely can I resist the lure of such splendid fighting games as those offered by Capcom, and indeed I spent a fair bit of time with this one even though I'm not much cop at it (or any of the others, now I think about it). It's one of the tag-team ones which I don't like much but my team of Ryu and Wolverine nonetheless fought on valiantly, keeping my embarrassment to as much of a minimum as they could, and I actually won a fair few bouts. This is a particularly stonking game too, even by Capcom's standards. Aside from that bloody mandatory tag-team nonsense, pretty much everything here is superb including a fantastic roster of characters - possibly my favourite before they started getting silly. Unlike most of the other games I played at the museum, this is thankfully also a game that can be enjoyed just as much at home thanks to the fantastic Saturn conversion. 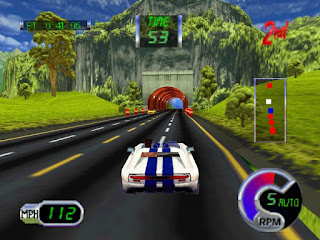 It's also hard to resist a sit-down driving game. I had the choice of two Cruis'n titles - USA or Exotica - and while I played both, it was the latter that took up more of my time. Initially this was because I hadn't played it before but then I discovered how mental its courses are too, exceeding even Speed Devils for craziness. The first one I selected was set underwater, for example, while another is set on Mars! Even the courses set in more normal locations like Las Vegas, Hong Kong, and Thailand are full of crazy features and shortcuts and stuff. Aside from these it's business as usual as far as the Cruis'n series is concerned - wildly oversteering cars and rubber band AI, both of which will soon irk most players, especially if you're playing at home (via the N64). Still, the crazy courses provide the kind of short-term thrills arcade games are meant for and I did enjoy playing this in its native territory.