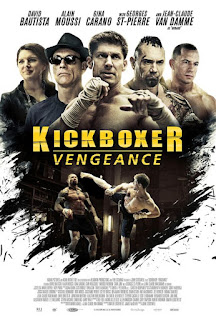 Tagline: "Without rules, without referees... the fight is to the death"

I've long been a fan of Kickboxer in all its cheesy 80's glory, and even a couple of its straight-to-video sequels (though definitely not all of them!), but even I wasn't sure what to make of the news that the series was getting a remake/reboot. Its story of a brother seeking revenge against an evil Muay Thai master for the crippling of his sibling was a reasonably engaging one but is it really a story that needs retelling? Most of its fans like the film for its action, as well as the scary Tong Po, not for its story, so it was a slightly odd decision to be sure. It would most likely need new actors too, so why not just put them in an all-new film? Perhaps a whole new series could be born. Oh well, the reasoning behind it doesn't really matter now I guess, it's here and who knows - it could be frickin' awesome so let's give it a chance. 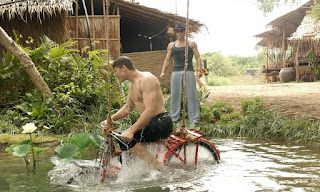 It's becomes clear right away that Vengeance is merely based on the original film rather than a direct remake, but the first characters we meet are again the two Sloane brothers - Eric (Shahlavi), a world champion fighter, and younger brother Kurt (Moussi). When Eric receives a big bucks invitation to challenge Tong Po, an undefeated champion in Thailand, he jumps at the chance but Kurt is much more cautious. With good reason as it turns out, for Eric is mercilessly beaten and killed by the brutal Tong Po (Bautista). Kurt naturally vows revenge, first attempting to shoot Tong Po before taking the more honourable path and seeking out his brother's trainer in Thailand, Master Durand (Van Damme) who, having failed to adequately prepare one brother for combat with Po, is determined not to fail again. 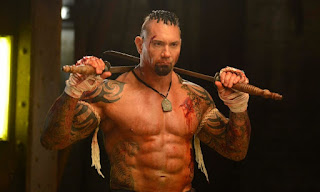 So yes, the basic plot is the same as before but there are many small differences. Notably, there is no warm-up fight for Kurt this time, although there is still a bar brawl (sadly no drunken dancing), and he has also earned the attention of the local police who are trying to stop the big fight. Shahlavi (who tragically died before the film was released) and Moussi are okay as the two Sloanes. Obviously we see far more of the latter and he's fairly likeable as well as a clearly talented martial artist (at least in a choreographed environment), and it's also cool to see JCVD back, this time as the mentor rather than the student. His teachings include some of old Xian's ideas as well as some weirder methods (such as the underwater cycling shown above), and he's also unsurprisingly rather more physical in his approach. 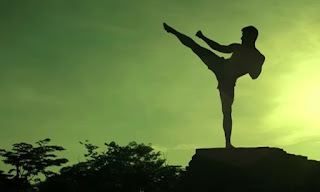 The inevitable love interest comes in the form of, Liu (Lane), head of the police efforts to prevent Kurt fighting. She's also about the only major character with any Thai ancestry (half) - odd for a film set in Thailand! Of most interest to me and many others, however, was Tong Po, and I was disappointed. I like Bautista - he's a good wrestler, I've enjoyed a couple of his acting roles so far, and there's no doubt that he's physically imposing enough - but the character isn't nearly as intimidating this time around. That's more the fault of the writers than anyone but it spoilt the film for me a bit. In the original you were willing Kurt on against an evil, seemingly unstoppable machine. Here's he's just... the current champion. He's tough and will take some beating, but you just kind of take it for granted that he will be. 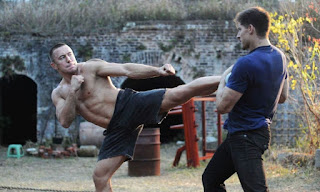 It's not a bad film though, for fans of this kind of thing. If feels a bit dated, probably thanks to its origins, but there is lots of decent action and the training sequences are actually pretty good. Most of the scenes featuring Van Damme are better than those without him, even if it might have been more appropriate to cast a Thai actor as the wise old grand master. The production values are obviously far greater here than in the previous films which also helps elevate it a little; there are some great locations used and much lovely scenery. I just can't shake that feeling that it was all a bit pointless. Clearly another whole series is being planned anyway though - the sequel (titled 'Retaliation') was underway before Vengeance was even released! It's not bad but it could've been far better.

Special note: Whatever you might think about this film and its need to exist, you're still in for a treat during the end credits if you're a fan of the original film!