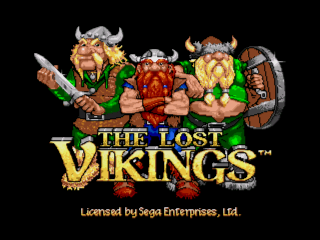 Now that I think about it, the sub-genre of platform/puzzle games, on which I am rather keen, is a little obscure as genres go, but the combination of two older and exceedingly popular types of game has proved to be a fantastic partnership. Examples have taken many weird and wonderful forms over the years and one of the most interesting (though not necessarily best) is of the sort that includes multiple characters with differing abilities. This was of course made popular by the great Lemmings. Dozens of similar games soon appeared and most were average at best, but The Lost Vikings is a pretty rare example of another game taking that premise, putting a different slant on it, and actually succeeding.

Starring as the multiple characters in this game are the Vikings of the title who are indeed lost. Actually, 'captives' might be a more appropriate word as our three Nordic friends have apparently been abducted by the curiously-named Tomator, emperor of the alien Croutonian Empire, who has been collecting unique and interesting specimens for his intergalactic zoo. They obviously weren't confined very effectively though as they immediately set out to escape their shackles. To do this you must guide them to the exit on each of the 41 levels (or 37 in the other versions) which are set over various themed worlds (through time, of course!). The first is apparently set within the Croutonian spaceship but others include an Egyptian one (obviously), Pre-Historic, and even toy/food-related ones (not sure what time-period it's supposed to be though!).

Before I get carried away though, I've just realised how rude I've been by failing to introduce the stars of the show - the Vikings themselves! So, say hello to Erik the Swift, Baleog the Fierce, and Olaf the Stout! As you may have guessed, they each have unique abilities so you must use them all as a team to successfully finish each level. Erik can run and jump around the platforms and can also smash down certain walls by headbutting them, Baleog is equipped with a sword and bow (with infinite arrows) with which to battle the various enemies, and Olaf has a large shield which protects him (and indeed the others if they're behind him) from enemies and hazards, and he can also raise it above his head and glide down from high places.

To complete a level you must succeed in guiding all three Vikings to its exit. On the first level this takes about one minute but as you go through the game the levels get larger and more complicated as you might expect. They are multi-tiered and most feature ladders, colour-coded keys/locks, switches, and various monstrous and not-so-monstrous enemies. As you progress you'll encounter more and more obstacles and features such as spring-pads, moving platforms, and even a device that inflates our heroes allowing them to float! The enemies take many forms usually related to the environment you're in. The pre-historic world, for example, features vicious cavemen, small dragons, and... umm... snails. There's also numerous guns and other projectile-firing devices around, and a touch from any of these things, or indeed falling too far, will cost the unfortunate Viking one of his three health points.

Contact with some of the hazards found in the levels, such as spikes or electric forcefields, can cause instant death too, so careful planning is required for the most part, rather than charging around recklessly. Fortunately, hit points are replenished each stage and there are also a few items that can help you such as various foods to replenish your energy and smart bombs to clear the screen of enemies. These items can be transferred from one Viking to another too, depending on who's most in need, which further emphasises the teamwork aspect of the game which is so prevalent. In fact, in some versions of the game (including this one) it's possible for you and a friend to control more than one Viking at once.

As I mentioned earlier, after the success of Lemmings there was a good few games released that tried their own take on the 'multiple characters with differing abilities' formula, but in most cases it either seemed unnecessarily tacked-on or that the developers put too much emphasis on it, forgetting to create decent stages for them to explore in the process! Luckily, Silicon & Synapse (who would later become Blizzard Entertainment of Warcraft fame) got the balance just right with this amusing adventure. The levels are well designed for the most part and before each one there's some humorous banter between the three Vikings (via speech bubbles). They all have unique abilities but they are simple too, and all vital for successful progress through the game's ever-tougher levels.

Aesthetically, The Lost Vikings is pretty average. It doesn't really need flashy graphics and, whilst there is a lot of colour and some nice backgrounds and foregrounds, it's certainly not ground-breaking either. It's the same with the sound - effects are kept to a minimum and the music suits the game well enough but isn't particularly memorable. As with all games of this type though, it's other aspects of the game's design that counts, such as level and character design. Happily, near enough every aspect of the gameplay is spot-on. The Vikings themselves are appealing (helped by their entertaining chatter) and are easy to control, and the difficulty curve is reasonably well-balanced too. The only problem is that there's something of a 'trial and error' aspect to some sections of the game, and if you make a mistake and kill a Viking it's all the way back to the start of the level, and they can get pretty big and complicated later on! Still, each level has a password and it is addictive, with the unique abilities of each Viking making for an interesting and fairly originally-designed game that's well worth a look.