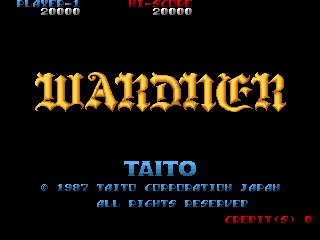 I think it's safe to say Taito have introduced a good few memorable games and characters over the years but Wardner must be considered one of their more obscure offerings. It's a side-scrolling platform adventure and stars a portly young chap who goes by the name of Dover who's out for a stroll with his girlfriend when a mysterious cloaked fellow appears and beckons them to follow him with stories of an awaiting 'fantasia'. Sure enough, the rapscallion has tricked them and swiftly kidnaps Dover's better half (but not before turning her into a crystal ball for some reason) and whisks her off to the evil wizard, Wardner. Predictably enough, it's now up to the girl's porky boyfriend to pursue the foul creatures responsible and rescue her (and hopefully turn her back into a human again too).

To reclaim his bit of stuff, Dover will need to brave five fairly large, scrolling stages. Adhering to platform game law, the first stage is set in a grassy/wooded area but it's quite a nice one featuring lots of small floating platforms and vines to climb before unexpectedly moving on to pools of gunky red 'water' and clouds with deadly lightning strikes. The second stage takes place in some sort of warehouse or industrial facility which contains more hazards than enemies, such as conveyor belts, whirling buzz-saws, steam-vents, and spiked presses. The third stage is similar to the first except there's much less climbing involved and things are far more fiery with tiny moving platforms floating on lava, pillars of fire, and fireballs raining from the sky. The fourth stage sees you entering Wardner's castle which is pretty much a giant maze of platforms and ladders. Successfully navigating this stage will lead you to the final stage in the depths of the basement beneath the castle.

The stages are all timed and the exit of each is locked. To obtain the key you must defeat the dragon that guards the end of each. Dover's only means of attack throughout the game is his ability to throw flames. These are rather droopy to start with and have a rather short range but their power can of course be significantly upgraded. This is done by collecting the golden orbs that are frequently left behind by defeated enemies or by purchasing a power-up from the shop that appears between stages. There are several items on offer here and there are others that can also be found all-too-rarely during the states such as the Magic Mantle (one-hit shield), Needle and Yarn (strengthens the Mantle to a two-hit shield), Clock (gives you infinite time to complete a stage), and a Golden Fairy (enemy-damaging companion).

There's also a couple of rather unusual power-ups that appear just once like the Ocarina that summons a large bird to carry you through much of stage three and another that allows Dover to jump many times higher than normal, but just once. As well as golden orbs, defeated enemies often leave behind bags of money and these, along with the treasure chests that are sprinkled through the stages, are what you use in the shops to buy some (but not all) of these power-ups. The enemies are quite numerous through most of the game and stages each have some that are unique to it. The first stage, for example, features what appears to be flying Mr Potato Head's, the second is the only place you'll find hunchbacks and birds, the third has skeleton warriors with shields, and the fourth is home to toucans and jumping eggs.

There are of course also several enemies that appear in more than one stage such as fireball-spitting cloaked dudes, rock-men, and bats, as well as the dragons which appear increasingly frequently as you advance through the stages, and of whom there are several different types. Fortunately, very few of the enemies regenerate as it's a pretty tough game already. Control of Dover is superb, although jumping in cramped spaces can cause a bit of a problem, but it's a very fair game regarding collision-detection and re-start points which helps a great deal and will encourage continued play, or at least it did with me! Having said that, the graphics are a little disappointing. Not technically as you can probably see - they're well-defined and fairly detailed, and the animation's not bad. I just don't find them particularly appealing.

The first and third stages look quite similar, for example, as do the fourth and fifth, and some of them such as the third are full of drab greys and browns. Even Dover himself is clad in light-brown attire! The music is a bit more appealing though - each stage has its own tune and the sound effects are pretty good too except for a horrible noise used in place of speech which is somewhat akin to someone scraping their fingernails down a blackboard! It's definitely a good game overall though and I enjoyed playing through it a lot. I think my favourite thing about it is the variety between stages - jumping across vines on the first stage, dodging obstacles on the second, navigating the maze of the fourth, etc. As far as I know, Wardner isn't a well-known game but it's nicely-designed, not too frustrating, and pretty addictive. If you're a fan of platformers you should give it a try - you may be as pleasantly surprised as I was.