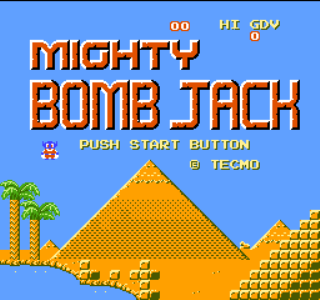 One of my favourite arcade games when I was growing up was Bomb Jack. Its simple premise and pixel-perfect controls made for a tense and addictive game. During my Speccy gaming days I noticed that Elite had quietly slipped out a sequel on the 8-bit micros of the time which, as it turned out, was a pretty big departure from the first game and wasn't nearly as enjoyable. However, it seems that there was another sequel shortly before the one I played all those years ago, known as Mighty Bomb Jack. It was released on the NES as well as most home micros of the time, but not the Speccy or any Sega system which is probably why I didn't hear about it at the time! As is often the case here at Red Parsley, however, it's now time to rectify that. That usually begins with some brief research before actually playing the game and on this occasion I was shocked to find a game that is apparently despised amongst the NES community. It can't be that bad, surely? 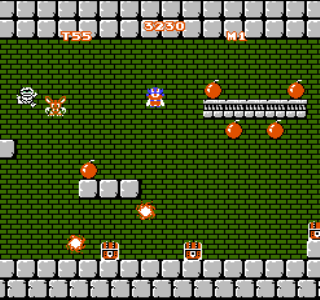 We'll find that out a bit later but I have to admit - my expectations weren't good, even before I discovered some of the vitriolic reviews doing the rounds. Obscure sequels to all-time classic coin-ops hardly have a good track-record after all! Then again, it is by the developer of the original so all hope was not lost. There's some poor excuse of a story involving Jack's mission to rescue a royal family from the clutches of 'king demon', Belzebut (no, that's not a typo). This, unsurprisingly, involves travelling through many bomb-filled stages! There are sixteen levels altogether (not counting the final battle) and each of them is split into two parts. The second part of each, known as 'Royal Palace' rooms, will be most familiar to Bomb Jack fans as they are basically stages from the first game. In other words, they're single-screen stages filled with platforms, bombs to collect, and enemies to avoid, but this time without the fancy backgrounds. The first parts of each level, however, are rather different. 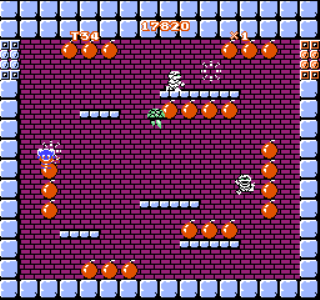 For the only time in a Bomb Jack game as far as I know, the main parts of each level take the form of scrolling platform stages. The basic premise remains the same as before though, and that is to collect the bombs in each stage, but this time it's not mandatory. Given the considerably larger size of the stages, the bombs are more sparsely spread out and the platforms are more infrequent, but the same kind of enemies spontaneously (and randomly) appear as always, often following you around. The notable addition to these sections are the numerous treasure chests dotted around almost as liberally as the bombs. These can be opened by Jack if he jumps while stood on one and they contain a variety of items including bonus points of various values, extra lives, Mighty Drinks, and Mighty Coins. Each stage, both 'Action Zones' and 'Royal Palace' rooms, are timed and each Mighty Drink you collect will give you an extra ten seconds. The Mighty Coins, however, are a little more interesting. 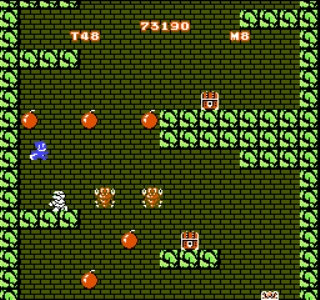 Once used, these special coins will change Jack's colour and bestow new abilities on him. Using one coin will turn him blue which allows him to open otherwise-locked orange treasure chests (the normal ones are red - they actually look almost identical though!), using two coins turns him orange and allows him to open any treasure chest simply by walking into it, and using three coins turns him green and has the same effect as collecting a Power Ball - it turns all enemies on-screen into coins (of a non-Mighty variety). Talking of the Power Balls, these also appear elsewhere in the stages. They, and the 'B' icons, return as normal in the Royal Palace rooms but in the main stages they will only appear from treasure chests, in addition to its normal item, when you've collected a sufficient number of bombs. Collecting the items in the treasure chests must be done carefully though as if you collect too many, an unpleasant surprise awaits! 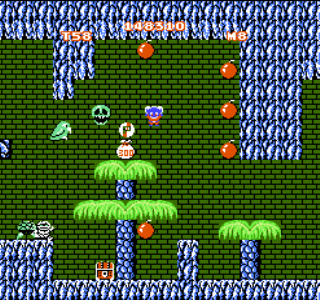 If you collect too many Mighty Drinks or Coins, the game judges you as being too greedy and sends you to a Torture Room! These are like Royal Palace Rooms but without any bombs. To escape from them you instead have to perform fifty jumps! On top of these new features, there's also quite a few secrets to be discovered here too including secret rooms with treasure chests (and enemies which can still kill you!), and it's also possible to skip all but the first of the main stages and just play through the Royal Palace rooms instead. This leads to the 'bad' ending though so you'll have to keep plugging away if you want to see the proper ending which requires two special crystal balls, which are of course hidden! It's a very tough game too, even unfairly so in some ways. For example, if you lose a life you have to restart a whole stage from scratch, and this is also the case if you manage to leave a Torture Room as well - back to the start with all power-ups lost! 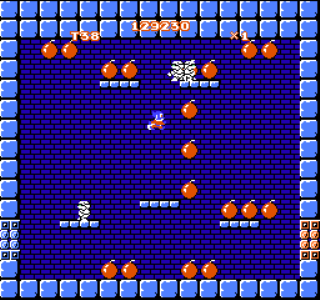 As with the original game, the random and sudden appearance of the enemies can also cause problems if they materialise close to (or right on top of) Jack since he dies from the merest touch, and then of course it's back to the start of the stage. If you can cope with the need to complete each stage in one life though, there's a lot of enjoyment to be had here. The sights and sounds are a bit basic though. The sprites are quite good and well detailed but the backgrounds and foregrounds mostly consist of simple patterns repeated through the stage, albeit in alternating colours which are well-chosen. The music and effects are similarly simplistic but pleasant and inoffensive enough. As with the original game though, it's the superb accuracy of control over Jack that makes the game so enjoyable. He can jump any height you want, including the whole height of the screen, and can hover or change direction at a pixel's notice, and he's extremely nippy too, so it's possible to zip all over the place, weaving in and out of the pesky enemies with as much precision as you yourself can muster. 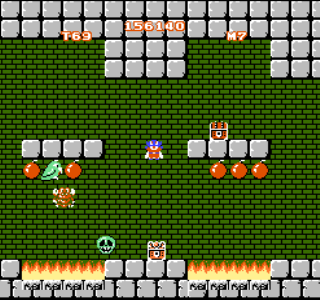 While it would be hard to place this game alongside the best platformers on the NES, mainly because there is so many great ones, it's still an addictive and entertaining game which is far better than I was expecting after seeing the savage reviews it received elsewhere. It can be rather harsh and unfair for sure but, like the original game, the controls and collision-detection are spot-on so practise makes perfect! It's packed with secrets and areas to explore too, and some areas have more than one route through them, so it'll certainly keep you busy. Bomb Jack is deservedly regarded as an all-time great and Bomb Jack Twin is basically the original on steroids but Mighty Bomb Jack is a far better sequel than Bomb Jack II. Rather than changing the style altogether it instead expands upon it, keeping the core gameplay and adding a good amount of new stuff too. I'm not sure which game those other reviewers were playing but this reviewer thinks Mighty Bomb Jack is great, and I'm confident that fans of the original game would agree!