Hello and welcome to another new Red Parsley feature! As regular readers will no doubt already know, game reviews here are rather on the lengthy side, but not all games need (or deserve) so much detail. Less commonly, I may not be able to discover all the necessary information about a game to start with. Whatever the reason though, I thought the 'Round Up' was an ideal solution! Here I will look at games that fit these criteria, five at a time. These will often include arcade conversions, so to start things off, here's a look at how the Atari 2600 handled versions of some of the most popular arcade games of its time... 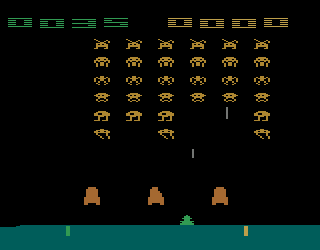 I don't think there were too many VCS games that were as eagerly awaited as this one! When it did arrive, some bemoaned the unauthentic alien designs or the incorrect number of shields, but the fact is, it's still great fun to play. Of course, even in the arcades it got a bit boring after a while but this version features an amazing 112 variations of the game which includes ones with moving shields, invisible invaders, extra weapons, and even a splendid simultaneous two-player option! It could certainly be prettier (although it is more colourful than the arcade version), and if it was no more than it appears as default it would soon grow equally tiresome, but the huge number and variety of game variations makes it one of the most enjoyable games I've yet played on this classic old console! ... 8/10 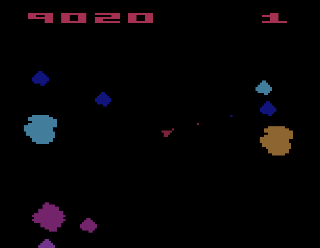 An arcade game famous for its vector graphics is unlikely to ever be quite the same in any other form but this version actually isn't bad. The asteroids are 'filled in' and multi-coloured this time and, while I'm not sure how much they actually look like asteroids (I suppose that was also true of the original!), everything else is about as good as could be expected. The background tune, if you can call it that, is present and correct and shooting up asteroids is nearly as much fun as it was in the arcades. It's also rather easier on the default game setting but there's an impressive sixty-six variations to be found here which change all sorts of in-game features which make it even easier or much harder, so there's bound to be a game you can get on with. They even thought up a backstory! ... 7/10 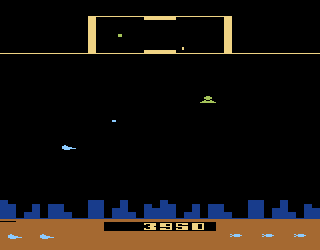 Perhaps slightly controversially, Defender isn't nearly my favourite arcade game of the era. This is mainly because I could never get used to having to use a button to change direction rather than simply pressing left or right. Thankfully, due to the restrictive nature of the VCS controller, this version uses the control method I'm more comfortable with but unfortunately that's about all it does right! The landscape has been changed to apparently random squares, the enemy sprites flicker relentlessly, the collision-detection is far from trustworthy, but most remarkable of all, your own ship disappears whenever you fire, during which time you can't be killed. This basically means you can fly around doing whatever the hell you want as long as you press the fire button rapidly! It does have twenty variations which offer games with different settings and speeds including some more difficult games which skip the first two waves but unfortunately I don't think there's any amount of different games that could save this mess.... 3/10 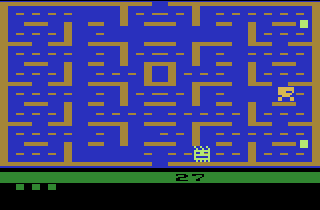 Here's another one that was hotly-anticipated, perhaps even more so than Space Invaders. Few arcade games have ever been as popular as Pac-Man. Indeed, so eager were gamers to have a home version that there were dozens of unofficial copies. The quality of many of these was questionable but the VCS was due an official conversion - that would surely be worth the wait? Sadly, it wasn't. Like Defender, this port was blighted by flickery, almost-unrecognisable sprites and a poor interpretation of the famous Pac-Man gameplay. This isn't one that could be saved by the game variations either - there's just eight here which merely alter the speed of the yellow glutton and the 'ghosts' chasing him. As a game, it's barely average. As a conversion, it's terrible.... 5/10 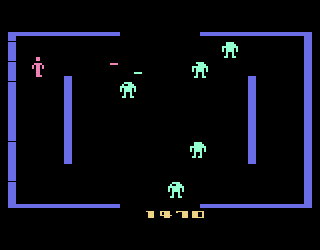 It was only recently that I took a look at the arcade version of this classic, and mighty impressed with it I was too. There are few games that have such simple graphics and yet remain so supremely enjoyable to play so it shouldn't be too hard to convert to the VCS, and this has certainly been the case. Obviously the splendid robotic speech is gone here (with the standard version) but the gameplay has survived intact and there are twelve game variations too, most of which merely make the game easier or harder by changing the robot and Evil Otto settings. The graphics may be a bit blockier and the screen isn't as tall (in fact, it's almost as if someone portly sat on the screen - the diagonal shots are at a strange angle too), but it's still a very enjoyable and addictive version of Stern's great game. Plus, you can even get a special 'voice enhanced' version! ... 8/10

I hope you liked the first 'Round Up' feature! More will follow :)
Posted by RetroKingSimon at 18:19