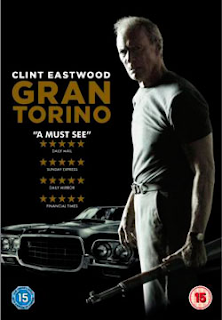 Tagline: "Ever notice how you come across somebody every once in a while you shouldn't have messed with?"

He's been on our screens for over fifty years now, playing a huge variety of roles across most genres, but this film is apparently the last time we'll ever clap eyes upon the great Clint Eastwood. Unless we happen to know him in person, of course. He stated before Gran Torino was released that it was to be his last acting role, and at 78 years old who could blame him? A statement like that does bring with it a certain degree of expectation though. That may be true of any Clint film but his last ever? His legions of loyal fans will have been expecting nothing but the greatest of send-offs! Luckily for me I didn't find all this out until after I saw the film so I didn't go in with such an unreasonable level of expectation.

The car of the title is the most prized possession of Walt Kowalski (Eastwood, believe it or not), a Korean war veteran and retired Ford factory worker who, having been recently widowed after 50 years of marriage, now lives by himself in a formerly-white working-class part of Detroit which is now mainly populated by Asian immigrant families. Walt's two sons, Mitch (Haley) and Steve (Howe), disappoint him and he thinks even less of his grandchildren, especially teenage Ashley (Walker). He spends most of his time sitting on his porch with his dog, Daisy, grimacing disapprovingly at near enough everything, but particularly the large Hmong family who live next door who look upon him with little more affection.

Two of the younger members of the Hmong family are teenagers, Thao (Vang) and older sister Sue (Her). The latter is a bright and confident young girl while the former is quiet and reserved. A bigger problem is that his cousin, Spider (Moua), is head of a Hmong street gang who are hassling him to join them. He reluctantly agrees to a 'trial' with them which involves stealing Walt's beloved Gran Torino. Suffice to say, things get a little more complicated and Walt unwittingly ends up as the hero of the Hmong community, a situation which does nothing to dampen his disdain for them, but a grudging respect gradually begins to form as Walt sees a way of atoning for some of his haunting memories of war.

Considering what little I knew of the film beforehand I was surprised to find that it's actually quite a slow film, particularly the first half, but the story and characters soon grab hold. The quality of the production was already assured with Mr. Eastwood's involvement too, and accordingly the extras are all played by Hmong actors and much of the crew is Hmong as well. Most of the cast have little to do, with the screen-time dominated by Walt's two young Hmong neighbours, Father Janovich (Carley), the young and inexperienced priest to whom Walt's late Catholic wife became close, and of course Walt himself. Clint fans will certainly appreciate his performance here. His character seems to have shades of several of his previous characters but it's a rather controversial one too.

Walt is a unashamedly racist for one thing. He growls disapprovingly, speaks his mind including flagrant racist terms, and doesn't even try to conceal his disgust at most of the people and events around him, much of which is related to the multi-ethnic nature of his neighbourhood. Eastwood plays him as well as any of his previous best roles - I'm sure no one needs me to extol the virtues of his acting talent but he's looking his age, probably more than his age in fact, and I've never seen (or heard) him as 'grizzled' as he is here. It's a captivating performance though - the minute he growls "Get... off... my... lawn" you just know he can back it up! How many other 78 year old's could seem as genuinely menacing as a disgruntled Walt Kowalski? It's a captivating film as well. Most of Eastwood's characters are hugely cheerable and this one, last on-screen performance or not, is among his most memorable.