There's no question that over my many years of gaming, shoot 'em ups have become one of my favourite genres, probably my very favourite, but it wasn't always the case. Back when my main source of gaming was my Speccy, I didn't spend much time playing them. Is that because the humble Speccy was incapable of hosting a decent shmup? No, I don't think so - it was graced by more than a few top arcade conversions such as ace ports of Flying Shark, R-Type, and Salamander so that can't be it. Maybe there wasn't many available or perhaps I just failed to notice them. Whatever the reason, it's a subject I've recently looked into and decided to compile a list of the best ones, excluding arcade conversions. Here's my cyan-soaked choices: 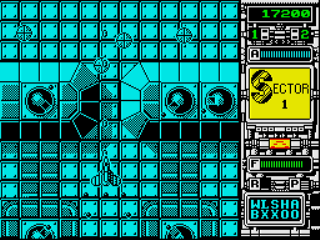 Whilst I knew the 8-bit micros received ports of this overhead shooter, I've always been under the impression that the ST and Amiga versions were its natural home. But then I recently heard that supposedly the Speccy version is the best one, and playing it reveals that it is indeed pretty sweet! The game itself is something of an acquired taste - you can switch between a flying spacecraft, for which the screen scrolls automatically, and a ground-based tank which can move as quickly or as slowly as you like, and there are of course enemies that can only be destroyed by one or the other of them. The monochrome graphics on this version can be a little confusing at times but other than that, it's a great effort, and the 128k version has some fantastic music too! 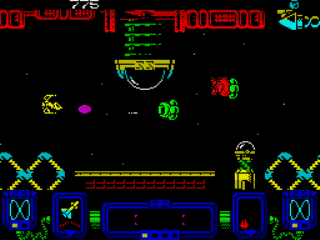 I actually first played this horizontal-scroller on my Amiga and I didn't really think too much of it at the time. It was okay, just rather basic and far too hard! I often heard positive things about the Speccy version though and sure enough, like Xenon, it's actually more enjoyable than its 16-bit interpretation! Its basic nature suits the Speccy more than the Miggy and it's also noticeably easier, mercifully. That's not to suggest it's now an easy game, mind you, but it is more forgiving and I enjoyed playing it a lot as a result. The backgrounds are a bit bare but the sprites and foreground graphics are detailed and colourful, particularly later in the game, so it's worth the tough slog. There's a few power-ups to make things a little easier too. Just goes to show, more powerful machines don't necessarily produce the best versions of a game! 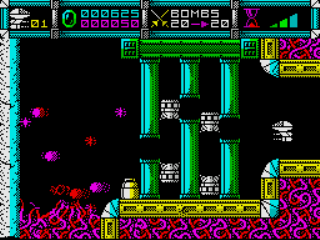 This side-viewed, flick-screen effort was one of the most famous and celebrated of all Speccy shmups and it's easy to see why. The premise was no more interesting than any other game of the type - you have to retrieve jewels and supplies stolen by pirates - but, as was typical of Raffaele Cecco's games, it was one of the best looking games to appear on Sir Clive's machine. The glorious, multi-coloured screens were full of detail and populated by lots of equally-colourful enemies which exploded satisfyingly in a nice, sparkly fashion when you shot them. The screens were also packed with just as many obstacles and traps as they were evil aliens and there was numerous power-ups too. Cybernoid is a unique and addictive game but it's also bloody hard which is probably the only thing keeping it from the number one spot! 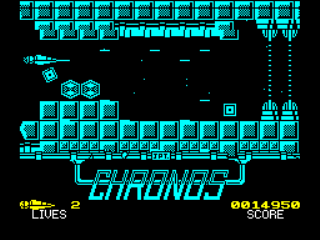 This is actually one of the few shmups I did spend a lot of time playing all those years ago and amazingly it's a mere budget game! It's often criticised for its simplicity - there are no power-ups and few different types of alien for example, and some of those that do exist are merely geometric shapes - but on this occasion simplicity is a good thing in my opinion. The few sound effects are good ones and the graphics are detailed with nicely-chosen monochrome colour schemes, but my favourite thing about the game is the design of the stages which is quite unlike any other shoot 'em up I've played. The horizontally-scrolling scenery is quite extensive and features several types of barrier as well as narrow gaps, multiple routes, and even written messages. I don't think it was even particularly well-liked, either by reviewers or other gamers, but the sheer unpredictability of the stages was enough to keep me playing and it's challenging and enjoyable throughout as well. 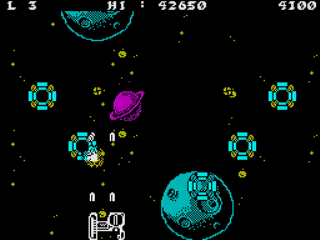 This one was seemingly a rather high-profile game being the first release on Gargoyle's 'Faster Than Light' label, and what a debut it was! It's a vertical-scroller this time which is set over five stages which take place in space and over the surface of planets and it's a game that was notable for its lovely colourful graphics and big sprites which feature none of the colour-clash that so blights many other games of the same... ummm... colourfullness. There's nothing especially original here admittedly - travel up the screen in your oddly-designed vessel and blast everything that moves - but it's the way that it's done that impresses. The sound is very limited but those lovely graphics and slick gameplay will encourage you to keep blasting away until you sent the alien scum running for good!
Posted by RetroKingSimon at 20:30