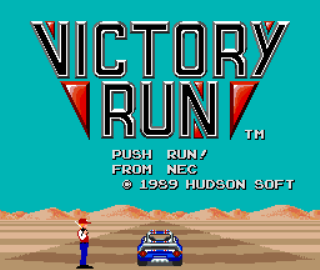 The PC Engine was a mighty fine console in its day, ground-breaking for an 8-bit machine really, and it was blessed with some fantastic games during its lifetime including dozens of quality shoot' em ups and arcade conversions, but one genre that was rather lacking on it was racing games, or more specifically, into-the-screen racing games. This could be for the same reason that inspired me to start this series of posts to start with - because they weren't usually very good! There is one that I always remember seeing in the early Mean Machines columns of C&VG and similar magazines though, and that was Victory Run. I don't believe it was a terribly successful game but the gaming press seemed to like it and that was enough for me. Or it should've been but, as with so many other games, I never got around to playing it! 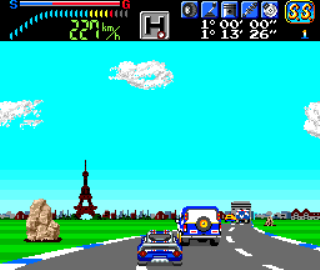 For all those years of ignorance I've always been under the impression that this was yet another OutRun clone and, while it does have some similarities, it's not really the same kind of game as Sega's classic. The most obvious difference is the setting - Victory Run is what must have been one of the first games to be based on the famous, not to mention arduous Paris-Dakar Rally. Accordingly, the game's course spans this distance and is divided into eight more-or-less equally-sized stages comprising road and desert surfaces in roughly equal measure. There's just the one vehicle available to carry you this distance which comes only with a manual four-speed gearbox. Using this, you must pass each of the checkpoints per stage within a fairly strict time-limit to proceed to the next. Before you begin, however, you must choose which spare parts to take with you. 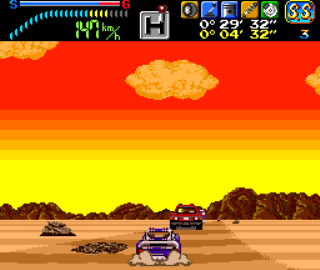 You can take a maximum of twenty parts from five categories - tyres, gears, engine, suspension, and brakes. However many you take of each is entirely up to you, but your car can get damaged over the demanding terrain and if you run out of a particular part - you're in trouble. For example, for my most recent attempt at the game, I decided to concentrate on tyres and engine for (hopefully) improved speed and cornering ability. This proved to be a wise decision as both were noticeably better - until my fourth gear broke and I had to trundle through the rest of the stage at a snail's pace! So, not only does choosing the correct spare parts to take with you usually determine how much progress you'll make but it also determines how much you'll enjoy the game generally! Having lots of any given part improves a specific aspect of your car's performance but having too few of each part introduces an annoying side-effect as well. 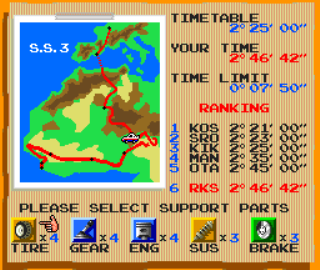 For example, take too few suspension parts and your car will be highly unstable during jumps. Most of them are pretty obvious though so I suppose the best option is to learn each course before deciding upon an ideal combination of spares. This is easier said than done as not only are the time-limits pretty tight but the numerous other vehicles on the road are equally troublesome, or even more so! They are not rival racers - your car is the only actual competitor - they instead consist of the usual 'civilian' vehicles which range in size from motorbikes up to large trucks. Contact with any of them will of course cause a substantial reduction in speed or shunt you off course where various road-side objects like rocks and trees await to flip your car around in an irritating fashion. The likelihood of this happening, as well as the severity of its impact on your race, is one of the things that effective use of spare parts can influence, so that's where it's best to concentrate. 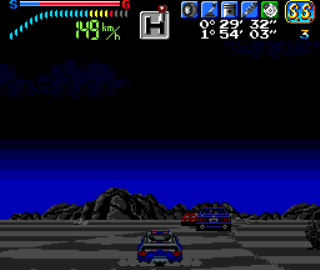 This 'support parts' business is a pretty good idea and certainly adds something to the game, but graphically it's not so hot. The backgrounds and roadside vary little and infrequently in their appearance, although there is a change from day to night as you play, but there's not much detail. The sense of speed isn't great either, and that's on the occasions when you actually manage to build up a decent speed along the undulating roads which are often crowded and can become rather narrow at some points too! The only time you'll get to relax is for a few seconds at the end of each stage. The other road users drive reasonable-looking vehicles but the scaling isn't of the best quality either - a seemingly normal size car can be in front of your car but appear larger than it, for example! The music is better and consists of a few (non-selectable) tunes which the game cycles through. I think Hudson have made an attempt to emulate the 'anthem' type tunes of OutRun and, while they certainly aren't that good (what is?), they're quite catchy and fine companions on the tough journey before you. 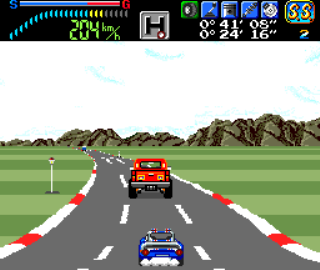 A tough game it is too, or at least, it's a tough game to do well at. I get the impression that this was intentional too as Hudson do allow you to make decent progress into the game anyway. Your time-limit has a 'reserve tank' of time, you see, and this is used when you run out of normal time and allows you to advance to the next stage despite probably being in last place as I consistently was! I suppose it's a pretty good idea too - it allows lesser-skilled players to see beyond the first stage and offers more skilled players the inspiration to improve their times. The only problem is, despite Hudson's attempts to add a bit of depth and longevity, Victory Run just isn't particularly enjoyable to play. For me, this is mainly down to the imprecise nature of the racing - the excitement of squeezing through small gaps or flying around the outside of another car just isn't here because the controls and collision-detection aren't very forgiving, and your car will often seem to veer off-course for no readily-apparent reason too. It's a good effort from a top developer, but sadly Victory Run just needed a bit more fine-tuning before tempting you to take a test-drive.