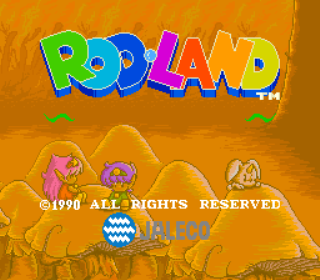 Considering how much I like these cutesy single-screen platform games, it's nothing short of shocking that I hadn't played this one before until it popped into my head again a few weeks ago. In fact, aside from its slightly chortlesome name, I knew little of the game until that fateful day. All I knew is that it's cute and that it would fit in well with the theme of this series of reviews. Indeed, the former point is seemingly something the game revels in and is apparent from the moment it starts. Like most other games of this type, Rod-Land is set in a magical far-away place populated by all sorts of fantastical creatures. Among them are two fairies called Tam and Rit whose mother has just been kidnapped and taken to a giant tower by a being of terrifying evil. Since Rod-Land is apparently devoid of any kind of law-enforcement authority, it instead falls to the brave fairies to being her back safe and sound.

As you may have already guessed, that makes this a game that can be enjoyed with a friend as well. Whether you're flying solo or have some help, however, the details your quest are the same. There are thirty-one single-screen stages filled with platforms and ladders in various arrangements with every few stages consisting of a boss battle. The platforms are positioned at any of four different height levels (including the floor) and Tam and Rit can move around the stages freely but they cannot jump. They can create their own ladders though (only one each at any time), which span the height of one platform level. The other fire button is used by our mythical friends to wield their 'rods' of the title which are magic wands. These send forth a zap of magical energy which temporarily immobilises the various enemy creatures that patrol the stages. Zap one continuously for a few seconds and it'll get lifted over the head and slammed down, ending its life for good. Sounds a bit violent for a sweet little fairy but it does the trick!

There are generally between three and six enemies per stage which are all animal or plant-based (I can only assume the evil kidnapper has also managed to brainwash the surrounding environment) and all must be defeated before you can move onto the next. Smashing one into the ground will occasionally leave behind a fruit for bonus points but more often leaves a weapon icon which is set off when touched. These are mostly types of bombs - one bounces around for a bit, another fires in a straight line across the screen - and there's a flamethrower too! Fortunately, none of them hurt either fairy but cause a world of hurt for the enemies! The platforms of each stage are also adorned with various bonus items such as flowers or gems. Collecting these is optional as they only give you more points but if you collect them all before you've defeated all the enemies, the game will enter an 'Extra Game' mode for a short time which sees the remaining creatures change.

Zapping one of these guys (who look like a cross between pies and acorns) leaves behind a letter icon. There are five to collect that will (hopefully) eventually spell out E-X-T-R-A, but I'm sure you don't need me to tell you what that does! As good as it is, I did at first think that was all there is to Rod-Land but it turns out that some messing with the dipswitch settings of the game reveals a whole new set of thirty-one stages! Instead of a spooky tower, these stages are set inside a pyramid where the fairies father has gone missing. Rather than mummies and scorpions and the other kinds of things you might expect to find here, however, the enemies are apparently all robotic/mechanical in nature. These aesthetic changes are the only differences though - the basic stage features are unchanged, so it literally does double the size of the game. With this in mind, I'm not sure how wise it was of Jaleco to hide the second game away and make no reference to it (that I could see) but it was well worth looking for!

Whether you're playing the tower game or the pyramid game, after the first couple of stages you'll enter the structure in question. There are few different backgrounds but apart from that the graphics throughout the game are outstanding - even for cute game standards they're cute, sickeningly so some might say, and I almost feel ashamed to find them so appealing! There's some nice static intro and between-stage screens and the sprites are mostly quite big, well-animated, and are beautifully-drawn, as are the few different backgrounds. The audio is really nice too and includes some great effects and some catchy, if not massively numerous tunes which the game cycles through. The stages all feature well-designed arrangements of platforms and ladders - some are packed full of them, others are almost empty. In the case of the latter, there are occasional balloons that drift up the screen which you can hitch a ride on but that's about all the help you'll get. 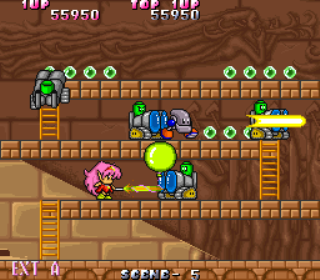 Every few stages features a new enemy or two and, while only a couple can fire projectiles at you, they do get ever more skilled and determined (slightly). The pyramid stages are a bit tougher but it's never an especially difficult game with the possible exception of the boss battles. These usually take the form of a much larger enemy or enemies which fire smaller enemies at you and they usually need a good few tries to defeat. After a bit of practise they're not too bad though. About the only thing that did cause me problems was the slightly unresponsive controls. More than a few times I was faced with enemies approaching from both sides - I'd zap one, then try to quickly turn around to zap the other but the stupid bloody fairy didn't turn and instead ended up floating up to heaven! If you can adapt your playing style to compensate for this though, as I did, Rod-Land soon becomes a tremendously enjoyable game. It doesn't have as much depth or longevity as something like Bubble Bobble but it is a wonderfully happy and addictive game which is really hard not to love.