I recently took a look at some of the best shmups to be found on Sir Clive's little box of tricks but, as is usually the case with the 'Top Fives' here at Red Parsley, I try not to include arcade conversions in these lists unless they are of exceptional quality or if there's simply no other games to choose from! However, the Speccy was home to many arcade conversions including lots of shmups so over the course of a few 'Round-Ups', I'll take a look at those as well. Here's the first five, randomly-selected picks: 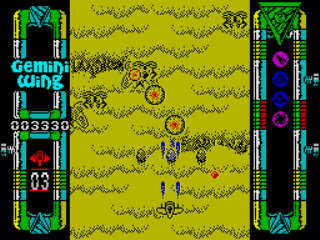 I always remember this one getting some pretty harsh reviews in Speccy magazines of the day which put me off all versions for a while, but I enjoyed the arcade version when I reviewed it a while back and so return to this conversion with renewed hope, and it is... not so good after all! Graphically, the sprites and stages are reasonably accurate. They're monochrome but quite detailed and a fair few sprites can be buzzing around you at once. Unfortunately, they can also be rather confusing which doesn't help when the game is already noticeably harder than its arcade parent, including a ship that moves at inconsistent speeds. The sound isn't bad though. There's no in-game music but the title-screen tune is decent and the in-game effects aren't bad. The main notable feature of the arcade game was the 'Gunball' power-ups and I'm pleased to say they've made the transition but the one-button joysticks of the Spectrum means that to use a Gunball you need to hold down the fire button for a second. This results in them often being used by accident which is the only other issue I have with this conversion really. A good attempt but not quite good enough... 6/10 (full review here) 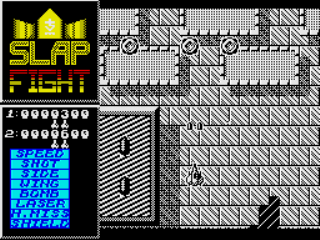 I received this game, nestled amongst several others, on the supremely-great Taito Coin-Op Hits compilation and, whilst not the most impressive game featured, I still recall having some fun with it. The graphics are again monochrome but quite faithful and include some good interpretations of the stages but there's practically no sounds. Like Gemini Wing, the two-buttons of the arcade game do not translate well to Speccy joysticks so you'll either have to play with the keyboard (which is horrible for shmups, in my opinion at least) or make do with the power-ups seemingly being selected automatically as you collect the stars. As if that wasn't bad enough, the bullets fired by your enemies are about one pixel big which makes them almost invisible! The potential for a great conversion is here but is sadly ruined by a couple of bad flaws. Bah! ... 5/10 (full review here) 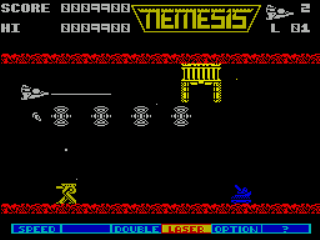 I've always preferred the original name for the Gradius series but whichever name you like, this Speccy conversion of the first game is one which remains notorious to this day for its badness! I had access to the spiffing PC Engine version so I've never had any reason to play it but playing it now, I can immediately see why it's so frowned upon. The Vic Viper is already pretty nippy so no speed-ups are necessary and after the first few waves of popcorn enemies, no more power-ups are forthcoming, for the first stage at least. There's virtually no sound either, and the graphics, although quite colourful, aren't great. The tiny enemy bullets and terrible collision-detection make it immensely frustrating to play and, worst of all, the almost unrecognisable levels stages bear little in common with those found in the undemanding coin-op, making it an awful conversion in every sense of the word. It should be best-considered as a game based on Gradius and even then a poor one. Boo hoo.... 3/10 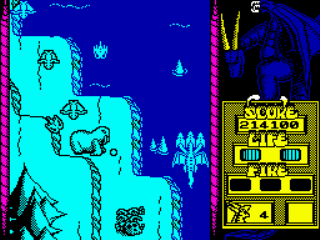 I always seem to like dragon-based shoot 'em ups for some reason and this one was the first I played. It seems to be set during pre-historic times - makes sense I suppose since dragons are a bit dinosaurish - so the stages feature mainly enemies appropriate to that setting. There are both airborne creatures as well as plenty of land and sea-dwelling beasts, all of whom spit endless bullets in your direction of course! Your flying dragon can spit his own fireballs back (and grow extra heads to that end) as well as drop bombs, Xevious style, on the pesky critters, and this presents the only problem with this otherwise-fine conversion - the old not-enough-fire-buttons dilemma again! If you can work out a way to get around this (play by keyboard? - eeek!), Dragon Spirit is decent version of a good (but tough) shmup. There's plenty of power-ups to seek out and the monochrome graphics change colour each stage so there's a bit of variety at least. If only I could assign both 'shoot' and 'bomb' to the same fire button... 6/10 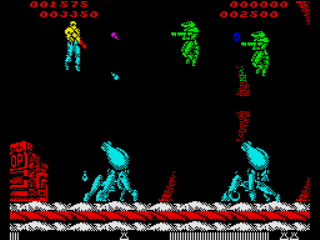 As I mentioned in a review recently, I always used to think two-player shmups were quite rare, so Forgotten Worlds used to get a lot of play on my MegaDrive primarily for this reason. Impressively, this conversion retains that feature to no noticeable ill-effect but time spent since my MD days on other shmups has revealed that this game wasn't actually that great to start with! The two player-controlled muscle-dudes wield giant cannons, Space Harrier-stylee, and they can be rotated through 360°. This can be quite a fiddly process on the Speccy but it works better than the control methods for some of the other titles here resulting in a reasonable-enough game which is the easiest one featured (mainly thanks to a rather generous energy bar!). The graphics are colourful but this comes at the cost of some awful colour-clash and the sound is once again minimal. If you liked the arcade game though, this is definitely worth trying... 7/10


RKS will be back soon with another Round-Up! :)
Posted by RetroKingSimon at 19:30