You know the habit games companies got into of releasing multiple installments of multiple games of multiple sports, often on multiple systems, but all part of the same series? Well, I could be wrong but I think Sega may have started it all with this very series for their splendid Master System console. All of the games in the series were already available by the time I got around to buying my Master System and I've never had a huge amount of interest in sports games, something partly caused by an overwhelmingly indifferent reception in the case of these particular games, so I still hadn't played them until very recently for this very feature. Can they be as bad as I've heard or are they unjustly cast aside? Bravely, I shall venture forth: 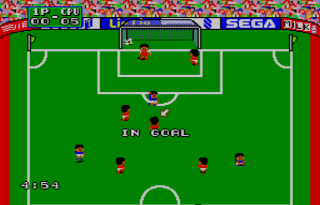 As far as I can tell, this was the very first game in the 'Great' range and, since I've never really liked 'soccer' (i.e. football) games before for some reason, I wasn't expecting to like this one either. It's a little surprising as a first release too - the sport wasn't especially popular in Japan or the US at that time after all! The action is viewed from overhead and scrolls up and down the length of the pitch and you can choose from three difficulties before starting a game. The players are all rather squat and almost super-deformed in appearance but look quite appealing, but sadly my first impressions soon went downhill. When in possession of the ball, the players kick it a short distance ahead rather than dribble it so it's hard to keep hold of it for one thing. The goalies are human-controlled too, although I didn't know that to start with (hence the score deficit in the screenshot!) and passing and goal kicks are hard to execute well too. The controls in general aren't very responsive actually, which sadly makes Great Soccer a frustrating and rather futile experience.... 3/10 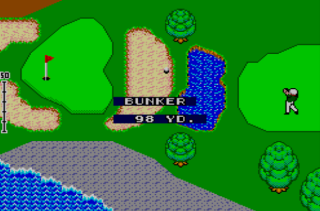 On the other hand, I have always been keen on Golf games, although I got into them way after this one came out so it was interesting to see an example of such an early one, and it's actually not too bad. There's training, match play, and tournament modes on offer (with the latter offering games for up to four players), and the action in each is viewed from an angled overhead perspective. There's the usual choice of clubs and a simple aim and power interface which is perhaps a little too simple - quite a bit of practise is required before any degree of accuracy can be achieved with your shots, and it can be a little inconsistent even then, but it's pretty good fun overall, especially with friends. The graphics are bright and clear and the music, while basic, isn't too annoying at least! Great Golf certainly isn't perfect but I've played worse golf games, and on far newer systems too! ... 6/10 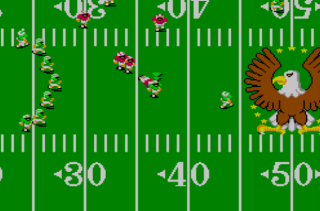 This is a sport I like in real life so it was the first one I tried, and initially it doesn't appear to be a bad little game, but some weirdness soon rears its head. It features twelve fictional teams (which seemingly differ only in the colour of their uniforms) and each game takes place over four slightly speeded-up quarters. The CPU team already has a quota of points at the start of the game and you play only on offense with the objective obviously being to score more! There are eight plays for you to choose from which are slowly cycled though. Supposedly you can stop the cycle on your chosen play but I cannot. I don't know if my copy of the game has an oddly-specific error but it basically means I can only run the final play. The biggest problem with this is that as soon as I'm in field goal range, the final play becomes a field goal! The graphics are simple and repetitive but colourful and with surprisingly little flicker, and the in-game music isn't bad either so this would be a fairly enjoyable, albeit basic game if I could stop the play damn selector. Even if it was possible though, you'd be better off sticking to American Pro Football for your MS-based gridiron action.... 2/10 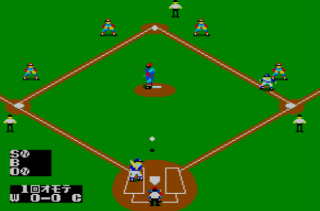 The second release in the series was less surprising than the first, given the sport's popularity in both Japan and the US, and unlike Football I can actually play this one! There are six teams to choose from this time and you can play either a normal game or a home run contest, but as is often the case with baseball games, you have only a limited degree of control over the proceedings. As the pitcher you can curve the ball to the left or right slightly, the batter can be re-positioned on the plate in the usual way, and the fielders can be moved around a little, but there's really not much point as they automatically catch high balls anyway! The computer-controlled teams are highly-skilled ones as well, of course, so it would be helpful if there were a few tricks and techniques that could be learnt to thwart them! The viewpoint shown in the screenshot scarcely changes throughout a game and there's no in-game music this time either, with just a few ditties instead, so all things considered, playing this can be a rather boring experience, sadly.... 4/10 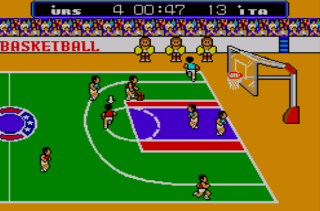 Unlike some sports, basketball is one that actually translates pretty well to video games, so it's no surprise to find that this is one of the better 'Great' game so far, although that's not really saying much! Strangely, the green playing surface from the previous field-based games is retained but it doesn't really look too out of place, and the sprites, whilst tiny and identical-looking, are quite appealing too (although I couldn't help noticing that there's no black players!). You can tell this is one of the later releases though - there's even some (rather fuzzy) sampled speech. Gameplay-wise, rather than fictional teams there's eight different countries you can choose to represent but it's still very simple stuff. Possible actions begin and end with 'jump' and 'shoot', it's far from realistic, and there's a few puzzling moments, but I enjoyed it more than most of the others games. Not a 'great' basketball game by some distance but it's still a reasonable five minutes of fun for two players.... 5/10

For reasons that will soon become apparent, there will be a second part to this post - look out for it soon!
Posted by RetroKingSimon at 19:43