There are few films that have been released in my lifetime, that I'm able to remember from personal experience at least, that have had a bigger impact than Jurassic Park. For a long time it was among the very highest-grossing films of all-time and the franchise's name still carries a lot of weight today, to such an extent where the oft-delayed fourth instalment in the series still gets me excited! The second and third films were pretty damn entertaining but surely everyone agrees that the first remains the best. I've watched it a good few times now as well, and here are my Top Five favourite moments from it: 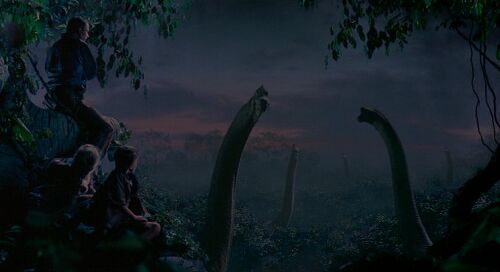 The arrival in the park itself unquestionably fills you with awe and wonder, but if there's one scene that really transports you back into pre-historic times, it's the unexpected sight of a group of giant Brachiosaurs, their necks poking high above the treeline going off into the distance. I'm not sure if they really did sing like whales, and I can't decide if the snot joke adds to the moment or ruins it, but it's a poignant scene for sure. 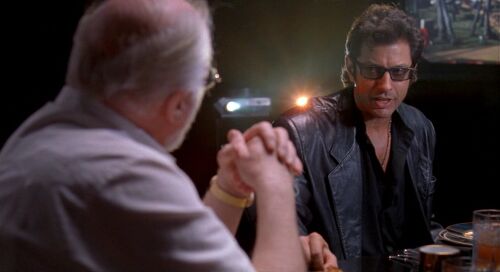 Jurassic Park is obviously an action-thriller, a classic example of the genre in fact, but if there's one non-action scene in it that I always look forward to, it's the discussion that takes place shortly before everyone embarks upon their 'tour'. Particularly noteworthy in my opinion are Dr. Malcolm's lines...

Malcolm: "The lack of humility before nature that's been displayed here staggers me."
Gennaro: "Thank you, Dr. Malcolm, but I think things are a little different than you and I feared."
Malcolm: "Yes, I know. They're a lot worse."
Gennaro: "Now, wait a second, we haven't even see the park yet. Let's just hold out concerns until..."
Hammond: "Alright Donald, alright, but just let him talk. I want to hear all viewpoints. I really do."
Malcolm: "Don't you see the danger, John, inherent in what you're doing here? Genetic power is the most awesome force ever seen on this planet. But you wield it like a kid who's found his dad's gun. I'll tell you the problem with the scientific power you've used here - it didn't require any discipline to attain it. You read what others had done and you took the next step. You didn't earn the knowledge yourselves, so you don't take the responsibility for it. You stood on the shoulders of geniuses to accomplish something as fast as you could, and before you knew what you had, you patented it, packaged it, slapped in on a plastic lunch box, and now you want to sell it."
Hammond: "I don't think you're giving us our due credit. Our scientists have done things no one could ever do before."
Malcolm: "Yeah but your scientists were so preoccupied with whether or not they could that they didn't stop to think if they should."
Hammond: "But this is nature! Why not give an extinct species a second chance?! I mean, Condors. Condors are on the verge of extinction - if I was to create a flock of them on the island, you wouldn't have anything to say at all!"
Malcolm: "Hold on - this is no species that was obliterated by deforestation or the building of a dam. Dinosaurs had their shot and nature selected them for extinction."
Hammond: "I don't understand this Luddite attitude, especially from a scientist. How could we stand in the light of discovery and not act?"
Malcolm: "What's so great about discovery? It's a violent, penetrative act that scars what it explores. What you call discovery I call the rape of the natural world!"
Ellie: "The question is - how much can you know about an extinct ecosystem, and therefore, how could you assume you can control it? You have plants right here in this building, for example, that are poisonous. You picked them because they look pretty, but these are aggressive living things that have no idea what century they're in and will defend themselves. Violently, if necessary."
Hammond: "Dr. Grant, if there's one person here who can appreciate what am I trying to do?"
Grant: "The world has just changed so radically. We're all running to catch up. I don't want to jump to any conclusions, but look - dinosaurs and man - two species separated by 65 million years of evolution - have just been suddenly thrown back into the mix together. How can we possibly have the slightest idea of what to expect?"
Hammond: "I don't believe it. I expected you to come down here and defend me from these characters and the only one I've got on my side it the bloodsucking lawyer!?"
Gennaro: "Thank you." 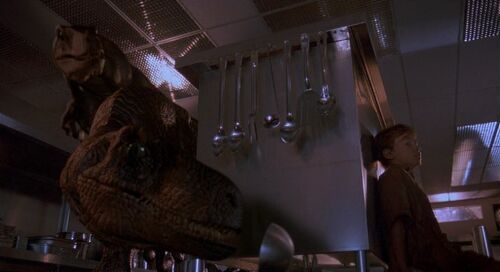 Those stupid Raptors are determined things, aren't they? Actually, if this film and especially its sequels are to be believed, they were/are pretty far from stupid and this scene was their first real showcase. Some of the film's harsher fans may have been happy to see the chirpy fellows chow down on the blabbering Tim and the perpetually-terrified Lex but the kids put up a fight and ultimately manage to outwit the sneaky creatures in what's surely one of the most gripping scenes in the film. 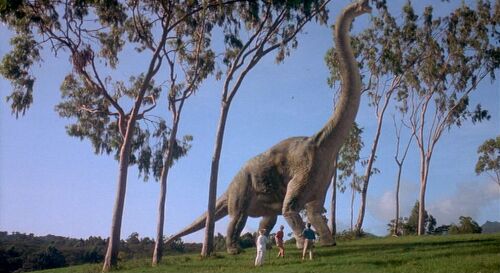 Prior to watching the film, if anyone somehow managed to avoid seeing the many trailers and spoilers that were doing the rounds, this scene would probably have had the same effect as it did on the film's protagonists - complete, dumbstruck awe! The scene is built up superbly as Richard Hammond persuades our heroic scientists to visit his island, and the longer they're travelling, the more we're wondering what they're going to eventually find. Of course, even the film's name gives a good idea but it still doesn't quite prepare you for the sight that soon befalls you. I think Dr. Grant summed it up better than I could: "It's, it's... it's a dinosaur!" Pretty obvious, I know, but let's face it - it sold the movie! Again, it was built up superbly, what with the lack of any dino-sightings on the actual tour, the approaching tropical storm, and the 'ride' breaking down right outside the T-Rex paddock. Then we get the famous ripples in the water before all hell breaks loose! The huge, toothy Tyrannosaur is an angry fellow and is fantastically realised on screen, using a combination of animatronics and CGI. The special effects were truly ground-breaking and, unlike many films that were championed for their effects, even ones released after this one (*cough*IndependanceDay*cough*), Jurassic Park still looks great today. The only thing I don't really like about this scene is the idiotic Lex turning up the giant torch. Why? Why would anyone do that? Stupid screechy kids. Still, least we got to see a lawyer get eaten, straight from the toilet no less!

**Bonus Moment!** I don't know about anyone else but there's one other moment that I always seem to notice - Laura Dern's arse! Hee hee! 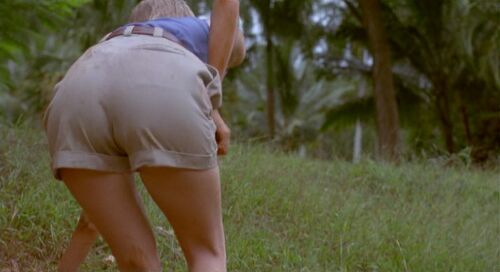