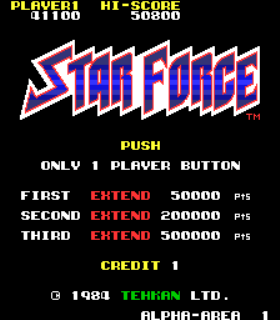 Most of the games I feature here at Red Parsley seem to fall into one of three categories: either old favourites from my youth that I'm fondly revisiting, classics I've known of for many years but never gotten around to playing, or obscure, little known games I've never heard of. This early Tekhan (Tecmo) release, however, falls into a much rarer category. It's apparently a very-well known and influential game, but one of which I previously had no knowledge! Eeek, how did that happen?! I suppose the fact that it wasn't converted to any home systems I owned at the time is a slight excuse but still! Luckily, thanks to the wonders of emulation I am now able to rectify this glaring oversight! 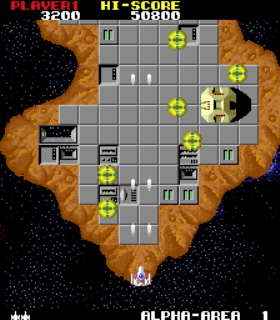 As many of you probably already knew, it's a shmup of the vertically-scrolling variety. What you may not have known is that it's set in "the year 2010 of Dimension Almanac" and pits you against the "mysterious planet named Gordess which was moving in the darkness of the cosmos for the purpose of mass murder and plunder". Jeepers! Predictably it falls to you to end this horror by piloting the 'Final Star' space patrol vessel through the twenty-five areas into which Gordess is divided. Contrary to the information provided with the game, these areas are apparently all enemy installations which have been constructed on asteroids or something of the sort floating in the expanse of space. 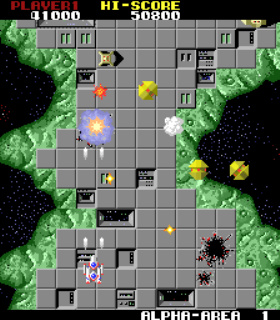 These metallic-looking enemy base things take various, seemingly random shapes and are built on different colours of what I assume must be rock. Adorning their surface are various objects which can be destroyed by the Final Star but they are not weapons. The threat comes exclusively from the many small enemy ships which zip about all over the place. There are around twenty different types in total and, whilst they almost always appear in groups or formations, they have many different methods of attack. Each stage is named after a letter of the Greek alphabet and at the end of each is a large boss ship bearing the letter in question which is your target. 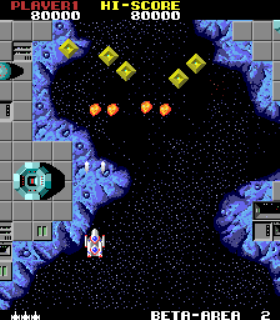 Successful destruction of the boss ship will of course provide immediate progression to the next stage which, aside from perhaps a couple of new enemies, features more of the same. Your only weapon with which to strike down the evil minions of Gordess is the mighty 'Star Beam Gun' bolted to the front of your small but formidable ship. It shoots an unspectacular twin-shot straight ahead but it's enough to destroy most enemies with a single shot and it can be fired quite rapidly too. There's just the one power-up available which doubles the size of your ship and increases its rate of fire, but that's it - you'll get no more help, so this is definitely a reaction-testing game throughout! 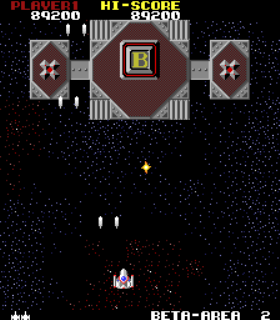 Considering Godress has ruled for 2,000 years and "everyone gave up fighting because of its awesome power", it's a surprisingly straight-forward task to end its oppression! To watch someone else play the game may also make it look like a rather easy one but it is actually a pretty tough challenge. The surprisingly-numerous stages are of differing lengths - one might take a few minutes to play through, another thirty seconds, but there's little variety. The bosses are the same, and the graphics for each stage, whilst fairly detailed and well-drawn, are merely different-shaped arrangements of the same grey squares with various-coloured rocky surrounds. 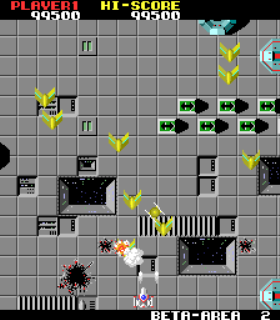 The explosions are poor too but there are a few things to keep you plugging away. Shooting certain areas of the 'ground' occasionally unveils bonus icons. If you can find all of them during a stage, a nice bonus awaits at the end of the stage! The instruction book of the NES version also speaks of 'seven mysteries' that the game contains which are mainly other ways of obtaining bonus points. Star Force is still a simple game though, even by shmup standards, but I don't think its simplicity is a restriction imposed upon Tecmo by the limited technology at the time - there were more complicated shmups around, after all. I think it's supposed to be this simple, and it works... to a degree. 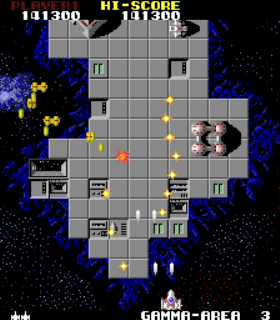 This may be a game I knew little (okay, nothing) of before playing it for this feature but it immediately reminded me of a game I have played before, namely Astro Warrior for the splendid Master System which, as it turns out, is a Star Force clone. My affection for Sega's game means my first impressions of this 'original' were great - control of the ship is smooth and accurate, the blasting action is slick and fairly balanced, and the action is accompanied by a few nice tunes. As mentioned, new enemies are introduced quite often and some of them can get really fast, whizzing around the screen spewing bullets all over the place. The grey scenery is fairly well-designed too - certain parts of it block your shots, forcing you to keep on the move to wipe out as much of the advancing scum as possible. I must admit though, the more I played it, the less I felt compelled to continue playing it. Unusually for a shoot 'em up, I just didn't find it particularly satisfying. It's a slick and playable game throughout, and considering its age its fantastic, but unfortunately the lack of variety takes a toll in the end.