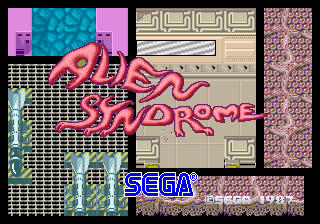 Like many game companies in the mid-to-late 80's, it seems almost certain that Sega were also bitten by the 'Alien' bug, so to speak. That is to say, they drew inspiration from the Alien movies for one (or some) of their games. The fact that this release came the year after the super-successful sequel to the classic 1979 film would tend to back up that theory as it's a game that may seem familiar to some fans. Rather than a gound-based colony, however, it takes place in a series of seven spacecraft. These were presumably craft operated by humans but they have become overrun by hideous alien creatures of various descriptions and their human crew taken prisoner. It therefore falls to Ricky and Mary, two suspiciously Space Marine-like soldiers, to liberate each ship in succession and eradicate the alien scum that now dwells within.

The interior of each craft is viewed from an angled overhead perspective and usually consists of a maze-like series of corridors, rooms, or open areas linked by walkways. The human captives, or 'comrades', are dotted around the scrolling stages and a set number of them must be rescued (by touching them) within a pretty strict time-limit before the exit is unlocked. This inevitably leads to a much larger and more dangerous alien boss who you must shoot the crap out of before moving onto the next ship. Each stage has unique enemies, usually two different kinds, and from the second stage onwards an infinite number of them are produced by Gauntlet-like generators. Destroying these will finally stem the flow of alien filth and allow you to cleanse the stage. If you want to, that is, as the only actual requirement is to rescue those pesky comrades.

Blasting the idiotic aliens does take up valuable time of course, but it also makes the game a lot more fun! Each new alien encountered looks and acts differently to the last. Some can spontaneously reproduce, others chase you, but most of them are able to shoot at you. A single touch from any alien or one of their projectiles is enough to take a life from Ricky or Mary but surprisingly the aliens are just as fragile - from the first stage to the last, a single shot is all that's required to take them out. Except for the bosses, obviously. Typically, you start the game with a pea-shooter gun which just about does the job, but its range and rate of fire is somewhat limited. There are four other weapons available though - laser, flamethrower, napalm, and a rapid-fire cannon - which, impressively, not only have unlimited ammo but also last forever as long as you don't lose a life.

It's also possible to collect up to two small guns that follow you around and shoot backwards every time you shoot your normal weapon which can be shot in eight directions but only forward. These, and all the other weapons, can be collected from panels on the walls where you can also find bonus points and maps that show the basic layout of the stage as well as the location of the remaining comrades. Points are awarded at the end of each stage for any remaining time and for any comrades rescued beyond the quota but, if you're like me, you probably won't see too many of them! I usually tend to play games in a very meticulous way, trying to do everything and see everything, so I found the time limits to be quite tight. Aside from that though, Alien Syndrome isn't an overly tough game and is actually, dare I say it, even pretty fair.

Part of the reason for this it that the aliens are defeated by a single shot from whichever gun you're carrying at the time (even the one you start with) but it also helps that their movement doesn't seem to conform to any repeating patterns. Their appearances are apparently random and their movement is seemingly dependent on your own, so your progress is pretty much just down to your own ability. Accompanying you on your refreshingly-unfrustrating mission are some tunes and sound effects which aren't too bad, although not really memorable either, but about the only thing I don't really like about Alien Syndrome is its graphics. It's running on Sega's System 16 board which I`m not hugely fond of at the best of times and this means that most of the colours used are rather pale and drab and there`s some quite unpleasant patterns used for the stage floors. That aside though, there's little to complain about, and some of the aliens look great!

This is particularly true of the big and imaginative bosses and there's quite a few different normal sprites too. The two playable characters don't look much different and are even less different to play as but they're not there to provide a bit of variety - they're there to facilitate a two-player game, and they do that well. A few differences between wouldn't have hurt anyway though, I suppose! Oh well, it's still an enjoyable game, for one or two players, and proves to be a very addictive one as well. The stages themselves get bigger and more complicated but are never overly large or complex - this is a game that's about fast and frantic shooting and nothing more, and with the ever-increasing hordes of aliens in the later stages, you'll need to be precise as well as fast! It's a shame it doesn't look a bit nicer but if you can handle the offensive patterns, this is a game that's aged well.