I was supposed to be taking a look at the cover art of some games for a different system next but the first and second parts of this series were pretty popular and I'm quite keen on doing a few more Master System cover comparisons too, partly because it enables me to see some more lovely (and previously-unseen) Japanese cover art but also because those non-Japanese ones are often so amusing! So, here is another selection for your viewing pleasure...

The Ninja (1986)
I guess the name pretty tells you all you need to know about what kind of game this is. Few games involving ninjas are anything but combat games but even so, clearly very little effort was put into the UK/US cover. If it wasn't for the shuriken (and its giant companion in mid-flight), this guy would look more like a medieval executioner than a ninja. The Japanese cover is far more appealing, featuring a good indication of the kind of peril and intrigue our hero can expect as well as an example of the kind of locale in which he can expect to receive it. The main character doesn't look much like the one in the game though... 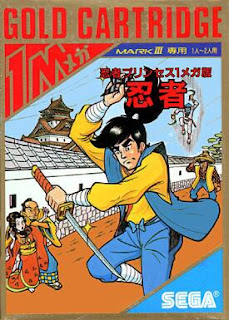 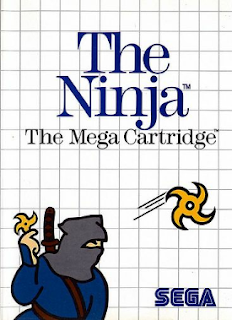 Double Dragon (1988)
This splendid brawler featured one of the best UK/US covers in my opinion. The logo/title takes up too much space, admittedly, but the image clearly indicates that not only is a street-fighting game, but also makes is fairly obvious that it's a two-player one too. I suppose most scrolling fighting games are two-player but even so - even the characters are good likenesses! The guy on the cover of the Japanese effort, however, looks like someone just yanked his junk! I suppose you would guess from the image that it's a fighting game but it's still perhaps the weakest Japanese Mark III cover I've seen and a rare example of a superior overseas cover. 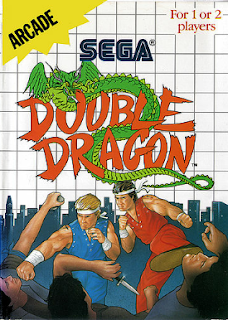 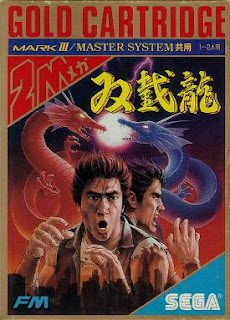 Enduro Racer (1987)
I suppose neither of these covers are much cop really. Both feature motorbikes as indeed the game itself does, but neither really gives any more clues. You might assume from the Japanese cover that the game is a motocross game - I guess it is in a way - and using a photograph is pretty lazy but you can't get much lazier than the amusingly-bad cover on the left either! 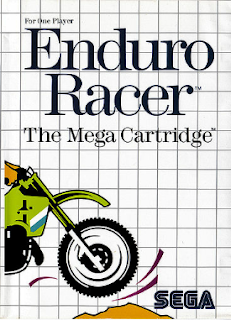 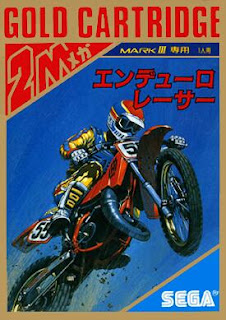 Astro Warrior (1986)
I've always been rather keen on this fine little blaster but my affection for its cover is less enthusiastic! The blue triangular contraption could be an aircraft or a spaceship and it's shooting what could be a pizza or a car steering-wheel. I suppose it does at least tell you that there's shooting involved but just take a look at that fantastic Japanese cover! It clearly features a spaceship (although mainly by virtue of the fact that it's in space than anything else) but it does a superb job of indicating the kind of game that awaits. The long, flat alien base is similar to that in the game and shows that the game is almost certainly going to be a vertical-scroller too. Great stuff! 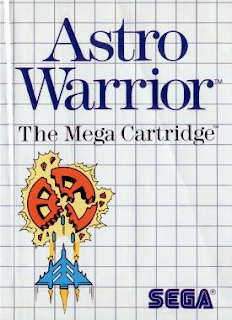 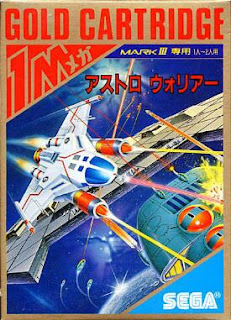 Spellcaster (1988)
I'm not actually sure which I prefer out of these two - they're both pretty good but obviously feature the kind of artwork most common in their part of the world. So, the overseas version features a fairly serious image of Kane battling some sort of fiery magician dude whilst the Japanese cover predictably uses an anime/manga-style image. I'm not sure how many small naked girls I can recall seeing in the game though. Both covers look pretty nice but I think the UK/US cover actually does a better job of depicting the style of game (although I'm not sure why Kane has a sword - he casts spells in the game, hence Spellcaster!)... 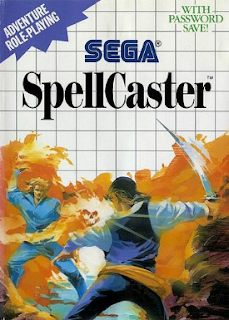 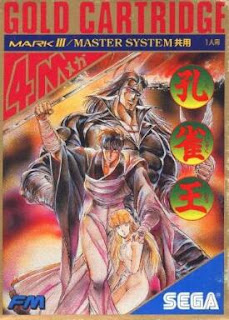 I hope you liked the latest selection! I have a few more MS covers lined up for praise/ridicule but after the next post I really will be moving on to another system... :)
Posted by RetroKingSimon at 18:53