Like most gamers, I first encountered the Sega name in various amusement arcades where they had been developing games since the early 80's before hitting the big time with their series of 'Super-Scaler' games. After a good run of success in this demanding environment, it didn't take them long before they decided they wanted a slice of the home-gaming pie as well. 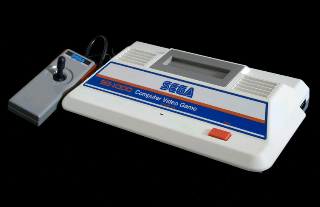 For many years I believed, like many, that their first offering in this field was their splendid Mark III console, better known to those outside Japan as the Master System. If I'd stopped to think about it, however, I would probably have thought... if that's the Mark III, then what happened to the Mark I and II? The obvious answer to this equally obvious question is of course that there were two consoles before it, and the first of them was named the Sega Game 1000, or SG-1000 for short. It was a modestly-powered machine which run from a clone version of the legendary Zilog Z80 processor which means that, like most computers and consoles of the time, it was 8-bit. Its graphical abilities included a resolution of 256x192 and a pallette of sixteen colours. It wasn't blessed with much memory though, so most games were rather basic. The SG-1000 was replaced the following year by the SG-1000 II which was near-enough identical under the hood but had seen an external redesign and was gifted with a less-crippling controller.

Sega also released a computer version of the console called the SC-3000 but none of them were very successful. A big reason for this was the rather unfortunate coincidence that the first version of the console was released on the very same day as Nintendo's brand-spanking-new, not to mention far more advanced (and cheaper), Famicom console which would of course go on to dominate both the Japanese and American gaming markets for many years to come. As a result of its less-than-staggering success, Sega's machine didn't receive a huge number of releases either and, as would also prove to be the case with the Master System, most of those that did appear were released by Sega themselves.

By my count, there are around 75 games in the SG-1000's back catalogue (some on cartridge, some on smart card, some on both) but it's hard to be sure - many games saw two or more releases and there were also a number of non-game-related releases such as BASIC programming packages. Of the games that did see release, some were conversions of well-known arcade machines while others are names I know little or nothing about, so in an attempt to get a well-rounded view of Sega debut console, I've chosen what I think will be a good mixture. Here's how I got on: 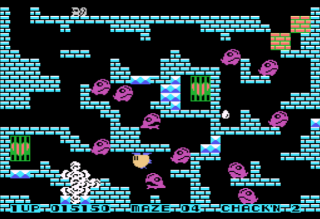 I've only recently discovered and played the arcade version of this early Taito game and I quite enjoyed it too, so it seems like as good a place to start as any! It's a good choice of game to convert too. Obviously even the basic graphics of the original couldn't be perfectly replicated here but aside from some different colours and a slightly squashed playfield, everything looks more or less as it should including, most importantly, the carefully-designed stages, and there's also a good rendition of the coin-op's music. The only real difference I noticed is that Chack'n now moves quite a bit slower. It's a shame that both the arcade game and the SG-1000 weren't more popular though as this is a very respectable conversion of an enjoyable platformer which fans would've enjoyed a lot. It'll still take some getting used to for non-fans but I like it... 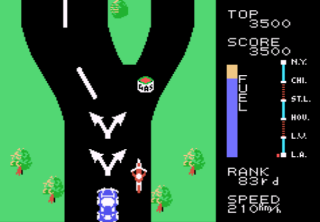 This one is a conversion of a little-known Irem coin-op of the same year which bears more than a passing resemblance to Spy Hunter (although this may be a coincidence - they were released very close together). Instead of a car though, you're charged with riding a motorbike through a succession of stages across the US while avoiding cars and and obstacles. Progress is ensured by collecting gas cans but crashing costs you a chunk of your supply which will probably happen often as the cars actually try to cut you off! It's a pretty decent little game though - the graphics are quite nice and colourful and the game alternates between two very different looking types of stage. The perspective also switches from overhead to an into-the-screen view shortly before the end of each stage as well. The music is okay but rather repetitive, but least there is some! Quite an enjoyable and addictive game, and it's a decent conversion too. 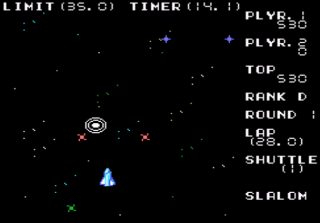 When I first saw the name of this game by Orca Corp I assumed it would be a vertical shmup, and for the first five seconds or so of the game, this continues to seem the case, but it turns out the game literally is a space slalom! You control what appears to be a space shuttle through a vertically-scrolling region of space which has a series of 'gates' marked by pairs of coloured stars through which you can pass (if you want - it doesn't seem like you have to!). Attempting to stop you are glowy objects which advance down the screen regularly. That's pretty much it and it's about as exciting as it sounds! The graphics differ very little from what you can see in the screenshot and the gameplay is hardly involving either. It proved to be mildly distracting for a few minutes but I already know the SG-1000 is capable of much more than this. It's no surprise to find that this game was one of the smallest games for the console in terms of memory used. 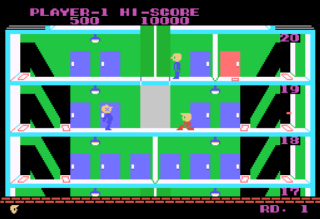 Another arcade conversion and this time it's a rather more well-known one starring you as a spy called Otto who must travel down through several rather tall buildings to retrieve secret documents while enemy agents try to stop you. You can shoot the agents as you would expect any decent spy to be able to, but they can also shoot back and delicate Otto will lose a life after a single bullet strike (or from being squashed under the elevator, as I discovered!) The graphics are quite good and the music isn't bad either but unfortunately I just didn't like the game much which was even more disappointing since I was expecting to. I think it's the clunky and unresponsive controls that I most have an issue with but the game is also rather frustrating too as it's often very hard to avoid incoming fire. Still, it's a great conversion so anyone who does like this game will greatly appreciate this interpretation of it. 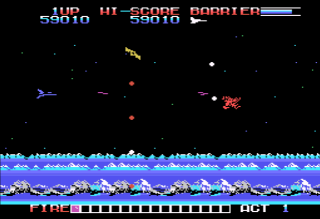 The Mark III had already been launched by the time this game appeared so it must surely have been one of the final releases for the console, and much like many games that appear near the end of a system's lifetime, it's one of the most technically-impressive games I've yet seen on the machine! Arriving courtesy of Compile (who would go on to bring us the Aleste series), Gulkave is a horizontal shmup which featured absolutely loads of unique stages, both above and under ground, and has stacks of power-ups too. The sprites are mostly small but everything moves around quickly and smoothly and there's even some parallax scrolling! Something of a pleasant surprise, this one, which shows what Sega's fledgling technology could achieve in the right hands. Top stuff!

Verdict:
Was it plain bad luck that Sega were soundly beaten in the battle of the 8-bits, or was it down to their own stupidity? It's hard for me to say without doing much more research but based on my assessment of this console, I'd have to take the easy way out and say it was probably a bit of both! As I understand it, the SG-1000 was test-marketed in 1981 but wasn't officially launched for two more years. Why the delay? If it was launched in 1981, I'm confident it would've met with more success than it did upon its eventual launch which, as mentioned, was on the very same day as the superior Nintendo Famicom of all consoles! Sega's machine is home to few exclusive titles, Nintendo's had many, and that's on top of its superior technical abilities.

The SG-1000's closest well-known equivalent is probably the ColecoVision, or maybe the MSX. All three machines are at a fairly similar level, technically. They shared the same CPU for starters, and Sega and Coleco's machine also used the same Texas Instruments sound chip which would go on to see further use in the Master System, Game Gear, and even the MegaDrive, albeit heavily modified. A good few games also ended up appearing on two or all three of these machines as well which further demonstrates the similarities between them. This wasn't always the case though. Take Gulkave, for example. I'm not sure whether the SG or MSX version was first but the two versions look quite different with the SG's version quite a bit bolder and more colourful than its MSX counterpart whose first stage looks more like a Virtual Boy game!

Oh well, fail it did though, nothing will change that now. I suppose there was more competition in the early years and the ColecoVision didn't do much better! The most important question we can ask nearly thirty years later is, is the SG-1000 worth playing now? For Sega fans such as myself, the answer is obviously yes, but I think any retro enthusiast should at least give it a try. It's a pretty capable little machine which has some great conversions of many popular arcade games of the time as well as a few all-original titles as well. Hopefully I'll be taking a look at many of these over the coming months with the results being swiftly documented on this very blog. In the meantime, if you were curious, or if this post has made you curious, it's an easy console to emulate, so what are you waiting for?!
Posted by RetroKingSimon at 16:59