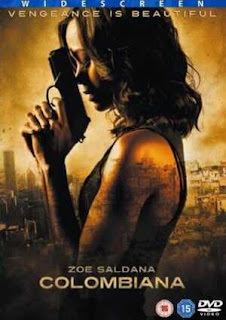 A while back here at Red Parsley I took a look at some of Hollywood's finest arse-kicking chicks. I'd like to think it was and remains a fairly respectable list but I've discovered a few more ladies lately who might also be worthy of inclusion. One featured in the superb 'Hanna' and it seems we may have another here in this thriller directed by the awesomely-named Frenchman, Olivier Megaton. The character in question is called Cataleya and is played by rising star, Saldana. We first meet her in Colombia as the child of Fabio (Borrego) who's a gangster trying to leave the employ of drug baron, Don Luis (Benites). Predictably, Fabio's intentions do not go down well with Don Luis who has him and his wife killed, but not before he passes a 'valuable item' wanted by his boss to his young daughter who of course manages to escape and find her way to the American embassy. Once she arrives in the US she seeks out an uncle, Emilio (Curtis), in Chicago who agrees to train her to fight and to kill. 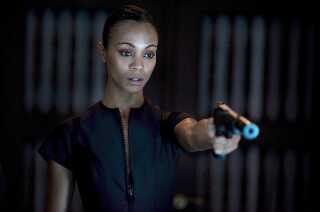 We catch up with her fifteen years later where it emerges she has forged a successful career as an assassin while at the same time plotting revenge against Don Luis and his minions who have now also made the move to the Land of Opportunity. So yes, as you may have already guessed from the hardly-inconspicious tagline, Colombiana is a revenge film, and the thing that's often of vital importance with films like this is whether or not we care about the protagonist, namely the delightful Cataleya, and by extension her 'mission'. One thing's for sure - whether it's as a young, newly-orphaned girl (Stenberg), or as an adult trained killer (Saldana), she certainly impresses in the numerous action scenes which are of the chase, infiltration, and standard shoot-out types. As satisfying as these are, however, there is little emotional connection with our 'hero' despite some more tender moments with her boyfriend (Blue) and even an FBI agent (James). 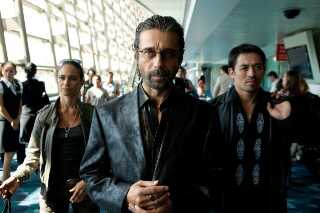 It could be because she's avenging someone who perhaps doesn't warrant it - her father wasn't exactly an innocent bystander after all. Questionable motives aside, however, the end product is a fairly solid if not particularly original action-thriller. Few of the other characters are remotely memorable, and the film is probably offensive to Colombians, but Saldana just about engages the attention enough to keep you watching. There is one particularly superb scene involving a jail break-in, and some tense moments as the police close in on her, but I can't help feeling a slightly more polished script and a more sympathetic main character would've made this a gripping film for its entire duration. The involvement of Luc Besson (who acts as both writer and producer) can't turn this into a must-see thrill-ride but it's not a disaster either.