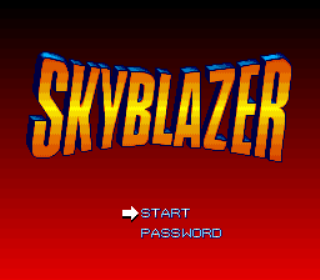 The arrival of the monstrous 32-bit consoles in the mid 90's may have brought lots of flashy polygons and lighting effects with them but something else their arrival did was to overshadow a good few of the later releases for the trusty 16-bit machines, and among them was this offering from Sony which must surely have been one of the last games they made for someone else's console. It takes the form of a platform/adventure game and is actually pretty flashy itself which is just as well since its story is not. It's an adventure that sees you take the role of a young scamp named Sky, believe or not, which presumably means his adventure will take the form of a 'blaze' across the magical kingdom in which he lives; a magical kingdom, incidentally, which is now bereft of its princess, Ariana, who has been kidnapped by the nefarious 'Lord of War', Ashura, who intends to use her magical properties to summon Raglan, an ancient creature of unspeakable terror. The story gets a little more detailed with the odd piece of dialogue here and there but the basic objective is - rescue Ariana and smack Ashura upside the head!

The quest at hand is a rather large one consisting of eighteen stages which are selected, and can also be revisited, via the map screen which shows them spread across the fictional world in question. They include the usual forests, castles, temples, and caverns, as well as a few more unusual locations, and they're patrolled by a considerable variety of enemies such as sorcerers, dragons, and strange monsters beyond description, all of whom are intent on depleting Sky's energy meter. He's a fairly agile guy though. He can run and jump around like any decent platform hero but he can also climb up walls as well which proves to be extremely helpful. His attacks come in two forms. The most basic sees him unleash his fury via punches and kicks which are so ferocious they leave blue swirly things in their wake! These are of course available without restriction. His more potent attacks requires magic power which is represented by a meter similar to the energy one at the top of the screen.

There are eight magic attacks in all but you start the game with only the first. The others are acquired one at a time after successfully vanquishing successive bosses and, whilst looking quite sparkly and flashy, actually only perform the usual old power-up tricks - more powerful projectile attacks, enemy freeze, temporary shield, smart bomb, etc. You can cycle through all the magics you've obtained and of course each has its uses. Using them depletes your magic power, but it's possible to collect bottles to replenish your reserves. Bottles to recover energy also exist and there are large and small varieties of each. The only other special items to keep your eyes open for are gems. Collecting a hundred of these will award you with an extra life but there's also some bigger ones dotted around which are worth ten normal ones. All these items are dropped by defeated enemies but they can also often be found around the stages, located in hard-to-reach places of course, so mastering Sky's movements is key here.

He doesn't have a huge repertoire of actions available but control over him is near-flawless, and it needs to be for much of the game. Quite a bit of the action is made up of standard platforming but Sky's agility is called into question on many occasions as well. There's some steep walls he needs to clamber up, the second stage mostly takes place through tree-tops with monsters hiding inside, the fourth stage sees him commandeer a mini-hang-glider, there's a Nebulus-style rotating tower stage with precarious little platforms, and some areas have moving sections of wall which need to be navigated very quickly to avoid a crushing! These comprise but a few examples of the varied gameplay on offer here, and there's also the bosses. Rather than the usual one boss per stage, here there's only ten boss battles, but they also invariably require lots of leaping and wall-climbing tomfoolery as well! Fortunately it's possible to use your magic during these battles and success is generally met with a chit-chat with the old man who guides you through the game and a return to the map screen from where it's sometimes possible to choose between several stages.

As mentioned, one area in which Skyblazer excels is the variety between stages. Some games try to add mini-games or bolt-on inappropriate sections that don't feel right but here the balance has been struck just about right. Each of the many stages is distinctive and each requires a slightly different approach without ever betraying the style and feel of the game. You even have to travel between continents on the map screen by hang-glider which sees the game switch to a 3D view, using trusty Mode 7 of course! A few other touches of Mode 7 have been used during the course of the game too, without ever going overboard, and that's typical of the graphics used throughout really - instead of trying to do too much, Ukiyotei have ensured that everything is clean, neat, and finely polished, and the result is fantastic. Accordingly, the sprites all feature an ideal amount of detail and the backdrops, whilst generally quite basic, are beautifully drawn with fantastic use of colour throughout.

There's some nice special effects during the course of the game, such as the rain on the first stage, and the animation is nice too. The foreground graphics aren't as varied as the everything else, consisting mostly of rock, but all look great as well. Splendidly, the audio is also of a very high standard. The sound effects are good, although not hugely numerous or memorable, but the music is superb. The style is typical of the SNES and its distinctive sound chip and there's lots of different tunes which are very rousing and moody and add a lot to the atmosphere of the game. The various stages, as well as the aforementioned variety, are generally very well designed, and increasingly challenging as well (although there is a handy password system). Most of the usual themes are visited here at some point like woodland areas, slippy ice, deserts, castles, etc, but there is usually at least an attempt to do something a bit more interesting with them than the norm.

When I first started playing this game my initial impressions of it were great anyway, but after the first few stages I really started wondering what might be in store for me on the next one too! Sure enough, throughout most of its length it continually surprised me, and pretty much always in a good way. The rise in difficulty is well-graded - the first day's play should see you reach the second continent but it does get quite tough and requires some quick thinking as well as quick reflexes. In addition to the modestly-numbered enemies there's plenty of traps and hazards around the stages such as moving platforms, spikes, fire, and all the usual stuff, as well as a few less common ones like rolling logs. Using (or saving) your magic power also requires a little strategic thinking as it can occasionally be used to pass some of these hazards. Overall, it's hard to think of anything bad about Skyblazer. The SNES sets the standard pretty high for platformers but this one is a tremendously entertaining, varied, and long-lasting game which deserves your attention, however belatedly. The last good release for the SNES? Probably not but it's certainly a good release. A very good one in fact!