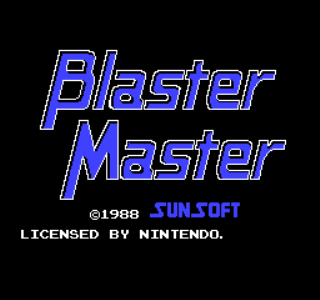 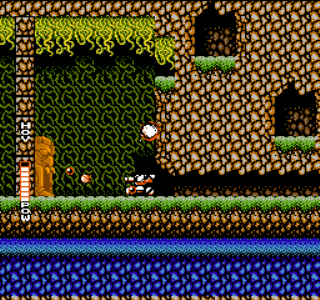 Instead of being placed in charge of a heroic warrior, us Western gamers were instead asked to assume the role of some probably 'radical' dillweed called Jason who, whilst chasing his escaping pet frog, Fred, fell into an apparently undiscovered 'hole' in the earth. At the lower limit of this inconspicuous hole is an army of radioactive mutants. Landing near a coincidentally-placed armoured tank called Sophia the 3rd, Jason mounts his new steed and sets off to retrieve his... frog. As game stories go, it's hardly one that inspires much excitement but luckily it's apparent from early on that Blaster Master is a far better game than its stupid story gives it credit for, although that's not really saying much. It's also quite a large game, set over eight stages which are each comprised of several sections over a wide variety of pretty and not-so-pretty landscapes including forests, lakes, deserts, caverns, and various enemy installations. Impressive for a game set beneath the earth's surface! 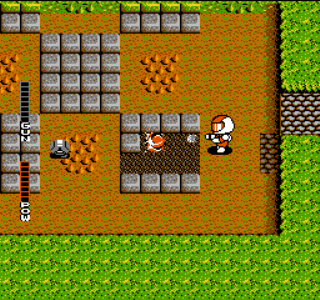 Much of the time spent exploring these stages is spent in the weirdly-named tank found at the start, and it soon proves to be one of gaming's more interesting such vehicles. That's if you can even call it a tank. It seems to have wheels for one thing, and it's quite a nippy and agile thing as well. An eyebrow was raised upon discovering its impressive jumping ability but that would turn out to be fairly mundane compared to some of its later abilities. After defeating the boss creature at the end of each stage, an upgrade for the tank is earned. The first couple - the Hyper Beam and Crusher Beam - merely upgrade its weak, short-range cannon to one of far more power and range, but after that things start getting a bit strange. First it's given a Hover Engine which allows it limited flight, then it receives a Dive Motor which allows it manoeuvre underwater, and later upgrades even allow it to drive on walls and ceilings! 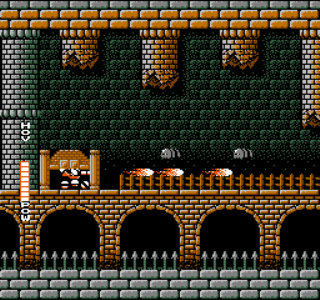 Jason can get in or out of his tank whenever he wants by using the select button and some sections require him to, such as when he encounters a narrow gap or a ladder. These areas usually lead to doorways called 'cabins' and, upon entering, the game switches to an angled overhead view. These sections usually consist of several scrolling maze-like areas linked by doorways. Both side and overhead-viewed sections are populated by similar numbers of enemies (which bely their supposed 'radioactive mutant' designation by appearing to be composed of primarily metallic substances) but, whereas the 'A' and 'B' buttons are used for shooting and jumping whilst in the tank, the jump button instead unleashes grenades during the overhead parts. It's also possible to power-up Jason's handgun by collecting up to eight 'capsules', each of which gives varying combinations of power and range. Touching an enemy or certain obstacles will obviously cause him to lose some energy but during the overhead areas it also sees him lose one gun 'block' each time as well. 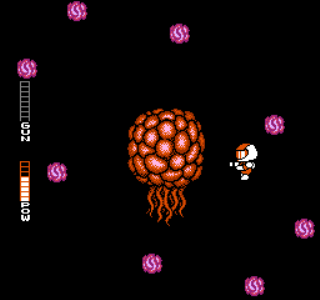 Spending time outside the tank is unavoidable for some parts of the game but Jason is obviously much more vulnerable without its armour. Luckily, any energy he does lose can be immediately replenished simply by re-entering the tank (unless he loses it all!) but it's best to stay inside as much as possible, especially since, in addition to its rather unorthodox modifications, it's also able to deploy three special weapons - Homing Missiles (shoots up to four heat-seekers), Multi-Warhead Missiles (non heat-seekers), and Thunder Break (lightning bolt) - which can be picked up through the course of the game by shooting enemies or certain destructible blocks. More frequently, these reveal 'P' icons to replenish power reserves, or 'H' icons to refill the hover gauge which limits the amount of flying you can do in your... tank. These two helpful icons come in two forms - flashing and non-flashing, the former of which offers a complete refill but is of course less common. 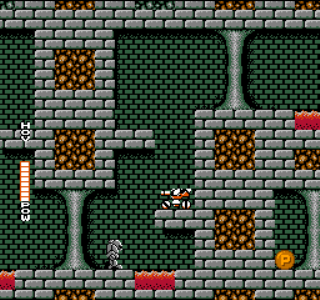 When I first approached this game with a view to reviewing it, I wasn't entirely sure what to expect. I was confident, however, that it would offer some sort of platformy/run 'n' gun-based tomfoolery but I definitely did not expect a game of such depth. It soon becomes apparent, you see, that Blaster Master, despite having a crap name (and story), is a lot more than a leapy-blasty game! Its eight stages are divided into several sections accessed through doorways but some sections (many, in fact) are definitely not linear, either in their layout or features. Some doors are large enough to fit the tank through, for example, while others are only accessible by Jason. This means leaving the tank behind but you have to make sure you can get back to it as well - Jason cannot leap as high as the tank can and he can't fall too far either so it's easy to be a complete buffoon! That said, some of the stages are quite intricate so you might be able to get back to the pesky tank by an longer and unexpected route but it's best to be careful (snigger). 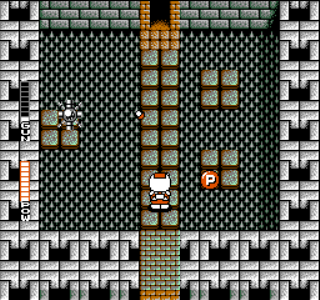 The stages are rather large though, and you'll frequently encounter areas or items that you can't access which does of course mean returning to them later, making this more of a 'Metroidvania' style game that a mere run 'n' gunner. This is mostly true of the side-viewed sections but the overhead sections are often rather maze-like and feature more traps and obstacles. It's also exclusively via these sections that the bosses are fought. This all makes Blaster Master a varied and involving game but is it any good? Well, the aesthetics certainly are. Most of the colours used through the game are quite dark, even a little gloomy, but everything looks fantastic! The foreground and background graphics are surprisingly varied for a game set beneath the Earth's surface with areas of green vegetation, ancient caverns, rocky chasms, metallic installations, and even large underwater areas which Jason can move through while in the tank as well as by himself. 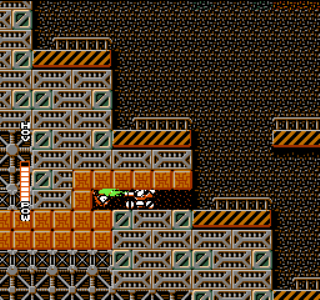 Even the overhead sections are quite varied featuring everything from dusty deserts to metallic dungeons filled with spikes and cannons! Jason himself is much more cartoony in these sections (super-deformed, even) but the sprites in general are a little generic with a few exceptions. The tank is nicely animated considering it's a... well, tank, and all the foregrounds and sprites are drawn well enough. The bosses are great too! The music is also of a high standard with a different tune for each stage, many of which are very catchy and memorable. This kind of stuff is expected of NES games with such high reputations though. What I didn't expect was such a long and involving game. It's one that can get pretty tough later on but the controls are flawless and exploring the large stages is never less than enthralling, especially when there's so much to see and do - it even came close to capturing Super Metroid levels of splendour! My new favourite NES game? Quite possibly...