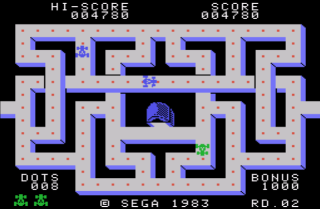 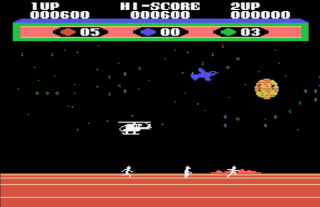 To date, I've only played this classic on my trusty Master System but unlike that, this SG version is actually a port of the original Apple II game rather than the arcade version which came later. Having never played the original game (or indeed any game on said system), I can't tell you how faithful this is (although, judging by some of the screenshots I saw, it's a close copy), but I can tell you it's just as difficult! The object in both versions is to fly a helicopter back and forth rescuing hostages while enemy tanks and jets try to stop you and it's a very tough mission anyway but this SG release suffers from some rather ropey collision-detection as well which makes it... not harder, necessarily, but much less reliant on skill as you're often unsure whether doing something will result in death or not! The music is really nice though and, like Pacar, it's reasonably enjoyable for a few minutes here and there... 5/10 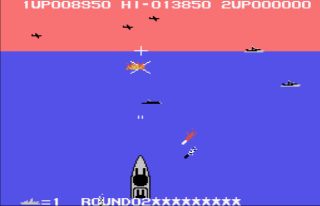 This early release, which is apparently a conversion of a rather obscure arcade game, places you in command of the Japanese WWII battleship of the same name, or rather places you in command of two of its guns. From behind this mighty weapon you're presented with a faux-3D view of lots of enemy ships, subs, and planes (American ones, presumably) of which you must take out a set number before you can progress to the next stage. You have two different types of shot with which to do this - a machine gun for the planes and torpedoes/missiles for the subs and boats. Both guns have a separate cross-hair and seemingly also come with unlimited ammo. All the while there's a steady stream of enemy projectiles headed your way which can be snuffed out with the machine gun. It's a simple game that varies little but it's decent fun and the sky changes colour to denote different times of day too. Which is nice... 7/10 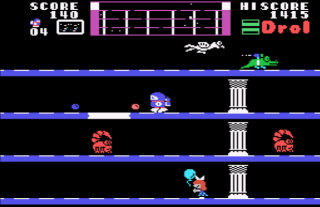 Another conversion of an Apple II game, this time a rather less well-known one which features something that's always cool - a cylindrical robot! The game plays similarly to SonSon (although it actually pre-dates Capcom's game) and sees you steering the walking/hovering automaton left and right through the four-story stages to rescue little girls and cute animals from the marauding monsters that dramatically outnumber them. There's only three stages (which repeat, getting more and more difficult), but the sprites are appealing and the music is great which makes playing Drol fairly enjoyable but for one problem - the rather sluggish control of the unnamed robot. Still, if you can get used to him performing your commands somewhat unreliably, Drol is a challenging and addictive platformer... 6/10 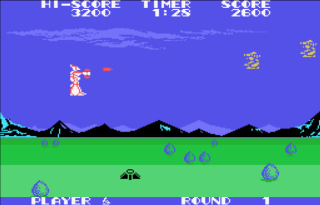 And to finish off this particular Round-Up... a shmup! Orguss is one of a horizontal-scrolling nature and immediately reminded me of Transbot on the MS so it's no surprise to find that it's actually considered its prequel. Both place you in control of a craft which can switch between a bulky-but-tough robot and a small-but-fast spaceship. Unlike Transbot, however (or the European version at least), Orguss is based on an anime which means it has plenty to try and pack in. Having not seen this anime, I can't tell you if it's accurate or not, but it is quite a nice-looking game with some varied backgrounds and nice colours used. It's not overly tough but there is a pretty strict time-limit which can prove a little distracting. Overall though, it's probably about as good as horizontal-scrollers get on the SG so it's well worth a try! ... 7/10


Red Parsley will be back with some more SG-1000 mini-reviews soon! :)
Posted by RetroKingSimon at 20:44