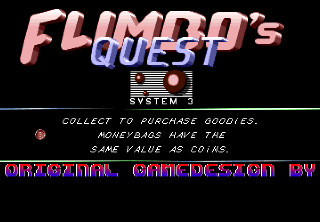 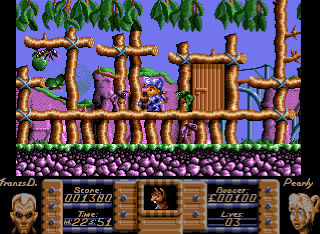 In order to do so, he'll need some help. Fortunately, he has it in the form of wizard, Dazz Bazian, who can be found behind a door located somewhere on each of the seven side-scrolling stages. He is custodian of a humble shop from where you can purchase a number of items but he is also capable of using his magic to send Flimbo to the next stage. To do this he needs some scrolls which are obtained from the enemy creatures roaming the stages. These horrifying abominations are infinite but one of them, a seemingly random one, is carrying the scroll and is indicated by an arrow above it. Flimbo can eliminate them by shooting them with his... umm, shooting ability (he doesn't seem to have a gun - it just comes from his torso) but, since each scroll bears only part of the spell needed, Dazz requires more than one to perform his magic each time. 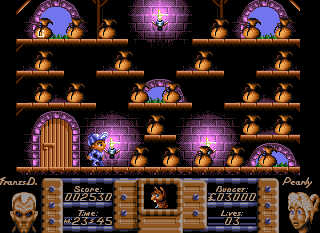 The themed stages are free-roaming and scroll for a while in either direction before you can go no further. Most parts of them are multi-tiered and are dominated by the many platforms that fill the screen. Although there are holes and watery areas, which of course cause instant death, the enemies are the main threat. These can be found on any part of the landscape and take many forms - snails, lizards, fish, foxes, bees, bats, and even human (or at least humanoid) creatures. Most of them just pootle around doing their thing but they are all deadly to the touch. They also take multiple shots to kill but doing so often yields a reward. Most often it's money, either bags or loose coins, which can be spent in the shop, but less frequently you may find a Longshot (increases the range and power of Flimbo's shot), a temporary shield, hearts (get five for an extra life), or an hourglass which extends the timer on the bottom-left of the screen which represents how long Pearly has to live. Eeek! 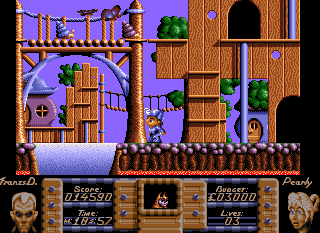 Most of these items can also be bought in Dazz's shop but there's really not much more to Flimbo's Quest. It was criticised in its day for being rather generic and unoriginal and I can certainly see why but, after finally playing it properly, I still found I rather enjoyed it. The graphics aren't bad, especially the backgrounds which are nicely varied, including wooded and mountainous areas, villages, a graveyard, Fransz's laboratory, and even an alien world. There's a decent number of different enemies too. New ones are introduced on each stage and most of them are reasonable enough, although I'm not too keen on Flimbo himself who isn't especially appealing. The music is catchy but there aren't many tunes - just two in-game ones which alternate from stage to stage and the effects are very few and far between. 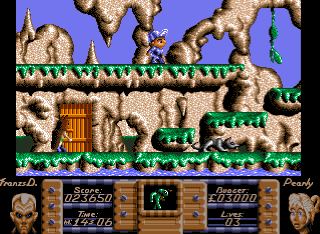 The gameplay is also repetitive with Flimbo's movements being limited to a simple run/fire/jump mechanic and the stages, for all their pretty foregrounds and backgrounds, are essentially the same. It should be a pretty smelly game really, I can't quite put my finger on why it's not. Its pace is quite fast, at least for its slightly cumbersome hero's standards, which means you're always on the move, jumping up and down to avoid the many enemies and shooting the lairy ones. It can be quite tricky, too, since they all take several shots to put down and some aren't so easy to hit, especially the flying ones. There is an occasional bonus room filled with money bags to be found though, and there are a number of secrets as well, which can help prolong its appeal, and it's rather addictive anyway. With a bit more variety and a more appealing hero, Flimbo's Quest could've been a corking one, but it's still better than first impressions give it credit for.