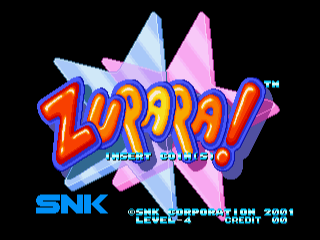 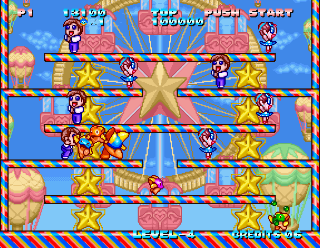 That was because Zupapa is that Neo Geo rarity - a platform game. Not just a platform game, either, but a cutesy single-screen one at that! Since it was only an MVS release there is, as far as I can tell, no instruction book with a weird story bolted on. Instead, it's straight into the action with no explanation why or what you're supposed to achieve. I can tell you Zupapa is the name of the player character who is a strange star-like creature who is apparently responsible (along with a similar-looking creature called Zupipi for a second player to control, if desired) for clearing each stage of enemies. There are forty-two stages overall, spread across nine worlds based on such themes as funfair, nature, prehistoric, toys, ancient Japan, horror, and several others. You can start on any of the first six worlds you like by choosing from the map screen before the others are unlocked upon their completion. 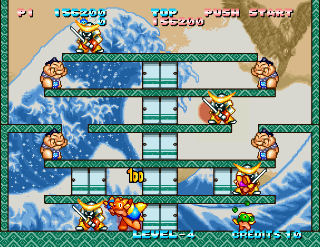 The first four stages of each world are populated by numerous enemies appropriate to the theme of the world (e.g. samurai and sumo wrestlers in the Japanese world) with the fifth stage hosting a battle against the similarly-themed but much larger boss. Zupapa and Zupipi are both able to perform a punch which stuns any non-boss enemy and allows them to be defeated for good by walking into them. However, each stage is also home to four small creatures called Zooks which look like smaller, different coloured versions of the larger player characters. More importantly, they can be collected, after which they'll follow you around. Pressing the punch button while in possession of a Zook then allows you to throw it which has the same effect as punching an enemy but obviously increases Zupapa's range of attack greatly. Walking into an enemy stunned by a Zook also creates a small starry explosion which then destroys any enemy caught in it and turns them into fruit - the more Zooks thrown at a single enemy, the bigger the explosion. 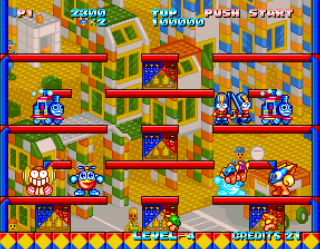 Thrown Zooks do, however, need to be picked up again each time they're thrown, whether they hit something or not, and they're capable of moving by themselves too, so you may have to chase them around the screen, particularly if you abuse them! There are also a number of collectible items to be found - some are for bonus points, including the aforementioned fruit, while others bestow extra speed, punch power, and things of that nature upon the recipient. These things don't have much impact on the game though which, despite being a very fast-paced one, is not especially difficult. Each stage has a time-limit but control of Zupapa is superb. He can move quite quickly and is not only able to jump to platforms above him but can also drop down to ones below - extremely helpful in a tight spot and invaluable during the boss fights which are the most challenging parts of the game. 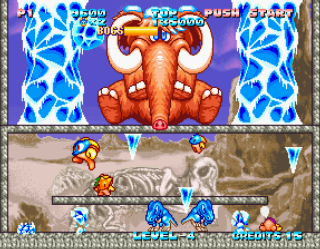 The bosses are also a highlight, visually. They're mostly pretty big like the mammoth dude to the right here and most are far more mobile than that lazy brute as well such as the vampire who predictably takes the job in the horror-themed world or the deceptively cute teddy bear who brings the toy world to an end. The graphics are generally far more cartoony than we're used from SNK's powerhouse including some great sprites of which there are many examples. You can probably guess what most of them are just from the world themes but they'll almost certainly look better than you expected! Everything moves smoothly too, and there are some lovely flashy, twinkly effects and some great animations, especially on the Zooks. Even better are the fantastic backgrounds which not only change with every world but even each stage gets a new one, appropriately themed of course. The music is really nice as well when you can hear it but the sound effects are loud and rather drown it out a lot of the time. It's worth listening out for though, with each tune suiting its world well along with some foreboding boss music. 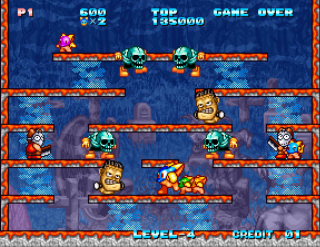 It may have been rather late to the Neo Geo party but when it did finally arrive (many years from when it was first glimpsed), Zupapa showed everyone just what we'd been missing on the system for all these years. Technically it's a great game, one of the best of its type on any system, but some games like this try to do something different and mess up what makes them so enjoyable to start with. Zupapa isn't one of these - the use of the Zooks is about the biggest innovation here but it's hardly a ground-breaker. Few stages are inventive either, but it doesn't matter as it gets it right everywhere that's important. It's always enjoyable jumping around the multi-tiered stages and there's never a dull moment - things can often get quite manic, in fact, especially with two players. Manic two-player fun is pretty common on the Neo Geo though, of course, and Metal Slug and King of Fighters and all the rest of them might well be fantastic games, but Zupapa offers an entirely different but just as enjoyable kind of fun.