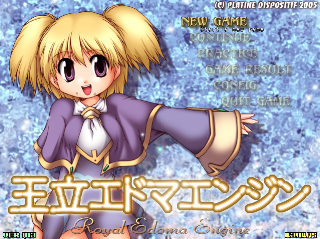 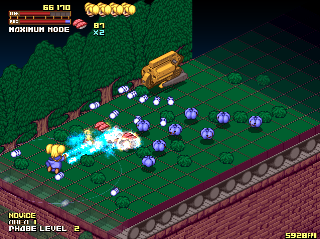 This latest war takes place in 1887 and stars a young farm girl named Revaia who, since the monarchy outlawed sushi in an attempt to being an end to the chaos, has been sheltering an underground sushi chef. On his deathbed, the chef bestows upon Revaia the sushi maker's secret weapon - the ability to make Dagon Mishu [sic]. Her secret was soon out, however, and she soon found herself being pursued the Royal Edoma Agency. This naturally gives rise to a five stage shmup through which you find yourself in control of the young lady in question who, as well as her new sushi-making talents, apparently also has the ability to hover a short distance above the ground and unleash magical energy from her fingertips. Unsurprisingly, the game therefore charges you with utilising these talents to clear all five stages of oppressive sushi-haters! Which is not easy... 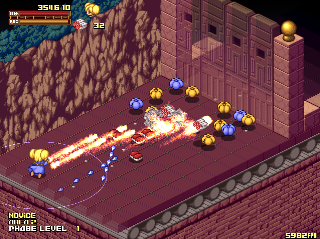 Indeed, Royal Edoma Engine might not feature armadas or alien warships but that doesn't stop it from being an intense bullet-hell fest to rival the best of them! The standard enemies vary little, consisting of mostly of small pumpkin-like objects of various colours which spit millions of bullets your way, and less frequent but more troublesome craft piloted by what I can only assume are REA agents. Revaia has a fairly generous life-meter but her offensive abilities do not change throughout the game - the rapid fire forward shot is her only standard weapon - but it can be powered-up. Destroyed enemies release sushi (what else?) which gravitates toward her when she hovers nearby. Collecting it gradually fills a meter beneath the life one which can be used to unleash a circular wave of supreme power. Using it when the meter is nearly full converts all on-screen bullets into sushi that refills her life meter and puts her into 'Burst Mode' for a while. 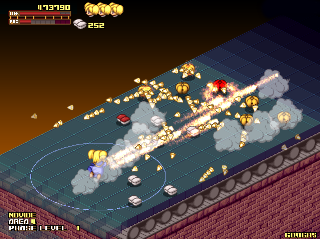 During this time, Revaia's shot power is increased as well, which happens automatically if the meter is allowed to fill up completely, known as 'Maximum Mode'. It only lasts until she takes a hit from an enemy or bullet, however, and this is something that will happen frequently. Moving Revaia around the screen is fairly intuitive and requires little effort but this remains an immensely challenging game, even on the lowest of the three difficulty settings as, like most bullet-hell games, the sheer number of enemy projectiles can get quite overwhelming. They do look quite pretty though! The music and presentation are also superb (including one of the greatest title screens of all-time!) and the hi-res in-game graphics, while lacking variety, are really nice, especially Revaia's two sparkly weapons! It is really tough going though, probably a bit too tough for me if I'm honest, but those with insect-like reflexes and/or fans of the genre looking for something a little different will almost certainly love it all the same.