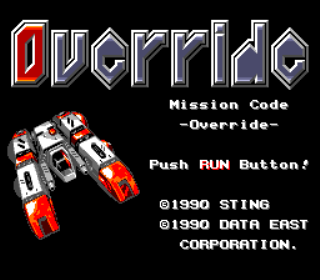 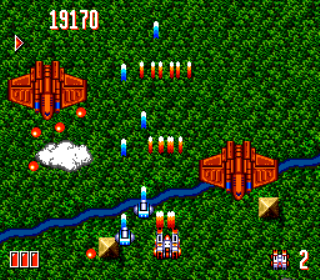 It's usually difficult to discover the back-story to Japan-only games (unless you're Japanese, I suppose) but as far as I can tell, Override is little more than an 'invading alien horde' game. Whatever the reason though, it ultimately sees you take command of a rather boxy ship (which looks much cooler on the game's cover) through six long vertically-scrolling stages, the first of which is set above ground before you move into fiery chasms and various alien installations. The ship is a pretty splendid one too - it has a shield which enables it to take up to three hits before sending you to a fiery grave, there are four speed settings, and it has a decent selection of weapons as well. Not at first, obviously - when you start out you'll find nothing more than a rapid-fire forward cannon of negligible power, but the power-ups soon start arriving thick 'n' fast courtesy of special, non-hostile ships. Take them down quick though as they don't hang around for long! 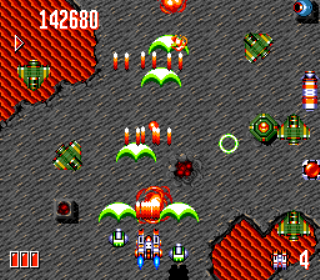 There are three kinds to look out for - ones marked by a 'P' gradually increase the power and range of your default cannon and ones bearing an 'E' refill a shield block. Perhaps more useful though, and just as numerous, are the coloured gems. These floaty icons cycle through five colours, each of which bestows a pod power-up upon your ship: purple gives you pods with side shots, green is a powerful forward wave shot, orange gives you diagonal shots, blue gives you pods that follow you around firing lasers, and yellow pods offer directional shots which shoot from left diagonal through right diagonal. These can all be powered-up themselves as well, by collecting successive gems of the same colour, and your ship's offensive abilities don't end there - it even has a charge weapon! Unlike most such attacks though, this one is not charged by holding the fire button. You'll instead need to leave it alone for a few seconds, as well as avoid taking any hits, as your ship will automatically charge the shot by itself. 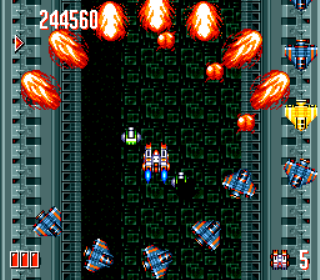 After a short while of inactivity, your ship starts to glow and crackle. Pressing the fire button now will unleash a hyper fiery shot which covers most of the screen, and the best part is you can use it as often as you like! You might think that such an abundance of offensive choices might make Override a rather easy game but surprisingly that's not the case - while it's far from the toughest Engine shmup, it's certainly no walk in the park either. None of the weapons is a particularly effective all-rounder for one thing. For much of the time I spent with the game for this review I favoured the green forward shot but it's nearly useless for some sections - not only is regularly swapping weapons the best way forward, but knowing which weapon to choose is also useful! Plus, despite the large number of power-ups usually found drifting around the screen, making much headway after the loss of a life (and all power-ups accordingly) is tough going. 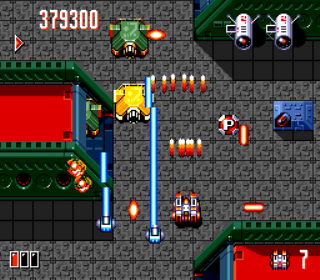 Enemies come from all directions and there's certainly no shortage of bullets flying around the screen either. Later stages start featuring homing weapons as well, which can cause some real problems. Ironically, the part of the game that arguably offers the least challenge is when a larger enemy makes a rare appearance or when you reach a boss - most of these can be destroyed before they've even fired a shot if you have a powered-up craft. The bosses do look quite mean though - it's almost worth going easy on them so you can see them in action for a while! Indeed, they're probably the best thing about the game from an audio/visual point of view. That's not to suggest it looks and sounds bad though - the weapon effects are really nice and the sprites are well drawn and mostly pretty memorable as well, although that's partly because of the way some of them incessantly buzz around you or encircle your ship! 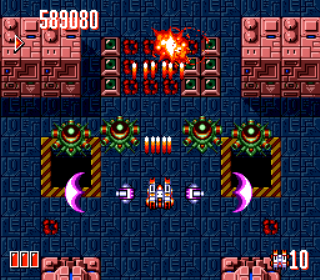 The backgrounds are slightly less impressive though. The first stage that takes place above ground is nice but the others don't vary a great deal and mostly feature a lot of greys and greens. It's far from an ugly game though, and the music and effects are great which help make Override a rather enjoyable blast. For some reason it reminded me of Gunhed a bit. That's no bad thing, of course, but I'm not entirely sure why. Must be down to all the different weapons and fast ships whizzing about the place. It certainly is a fast-paced game for which you'll need to be on your toes at all times (even the bosses, or at least the later ones!), especially if you're dodging enemy ships and bullets while waiting for a power-up gem to turn the desired colour! To be honest, I wasn't expecting much from this game but I'm happy to find a pleasant surprise. It doesn't last too long once you've sussed out the best weapons strategy but it's a tense and enjoyable blast all the same.