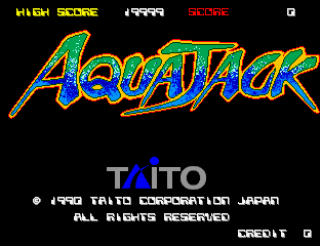 Whilst the question of when 3D videogames first appeared is an oft-asked and seldom answered one, I don't think anyone would disagree that true 3D games had to wait for systems to become powerful enough and for game media to offer sufficient storage space for them - i.e. the CD-ROM era. However, programmers have been using hardware and software tricks to achieve a similar effect since pretty much the dawn of gaming itself. Some systems were better at it than others of course - the SNES's Mode 7 being an obvious example - but some simple scaling techniques could achieve good results on near enough anything. In this new feature at Red Parsley, I'll start taking a look at some of them, specifically shoot 'em ups (for now). However, rather than start with an old favourite that I already know well, I thought I'd start with a game I'd never heard of until recently and which I discovered by accident!

The appearance of the Taito logo as soon as I started the game immediately piqued my interest but I still didn't really know what kind of game to expect. However, it didn't take too long to realise that, despite it's unusual name, Aqua Jack is a military-based shmup. The extremely-short intro sequence shows a male and female in army fatigues slouching about when they see a giant aircraft pass overhead and crash. Oh noo! I can only assume that it went down 'behind enemy lines' too, as our pair of lazy heroes immediately jump onto their conveniently-located speedboat thing and head in the same direction, one sitting at the controls, the other manning (or womanning) a sizeable cannon mounted atop it. And so begins, a fairly run-of-the-mill into-the-screen shooter which sees you in control of the fancy speedboat as well as its cannon with the uncomplicated objective of taking out anything that moves (and anything not moving if it looks suspicious too).

There are eight stages in total, each consisting of some sort of waterway - either an open stretch of wetlands/shallow sea or a comparatively narrow river. The speedboat is a fairly slow but manouverable one with the joystick controlling both its movement left and right and well as guiding a crosshair around the screen. Pressing the main fire button unsurprisingly sends a stream of Space Harrier-like bullets from your boat's gun to this crosshair while you also have a limited stockpile of missiles available as well, which act like smart-bombs, and your boat can also somehow perform a jump which is very handy for avoiding obstacles as well as enemy fire. It also has limited use of a booster which significantly increases its speed but also increases the likelihood of taking a hit. It's quite a durable craft though - only large obstacles will stop it outright with logs, river banks, and things of that nature infrequently presenting problems.

Something else that will stop you in your tracks is the rather large enemy army. I’m not sure which country the game is set in – none in particular, I expect – but they’re pretty well equipped. Helicopter gunships, jet fighters, and other boats will all hurl fiery death at you on every stage but the river-based stages also feature tanks, foot-soldiers, and cannons as well. One direct hit from any of them will result in the loss of one of your three lives, as indicated by the boat exploding and its occupants flying through the air. Some stages also feature obstructions in or across the water such as mines, barriers, gates, and pipelines as well. Taking them out is a fairly simple business too – your cannon is pretty effective already but it will also lock on to enemies if you give it a chance. The end-of-stage bosses are a bigger problem though, since they are… well, bigger! They take the unoriginal-but-formidable shape of giant aircraft and tanks (on a river-spanning bridge in case you were wondering) and can take quite a bit of punishment!

There's not a great deal else to Aqua Jack though. It shares a few things with Sega's classic Space Harrier but it's certainly no more complicated despite arriving five years later - there are no power-ups to collect, for example, not even more missiles. Aside from the odd obstacle to dodge, it's pretty much just aim 'n' shoot throughout with no frills or variety, and that applies to the graphics as well as the gameplay. As mentioned, stages are a mixture of rivers (with occasional, though limited, alternate routes) or open stretches of water (with trees and stuff to swerve around), but apart from that the graphics vary only with regards to the colours used, denoting different times of day, and a few different foreground and background objects. The scaling is pretty good though, and most of the enemy vehicles look pretty cool as well, and it's all accompanied by some decent music which compliments the action well, although it's not especially memorable either.

For all its sameyness though, Aqua Jack is good fun to play through a few times. The only slight annoyance is that the left and right on the joystick controls the direction of your boat as well as the crosshair, so in order to shoot choppers and jets down, you often have to steer into their line of fire! Still, that's part of the fun I suppose - do you take the chance or just try and keep out of the way? It's not always possible with landmines and other obstacles crowding the waterways so you'll need to master the jump and boost functions of the boat as well. It's very much an arcade game - simple and presumably designed for odd five or ten minute bursts - and I guess that's probably why it was never converted to any home systems, but what it does, it does well. Besides, there's not too many speedboat games around, much less speedboat-based shoot 'em ups, so it gets interest points for that if nothing else!