As recently touched-upon with the start of the 'Licensed Games' feature here at Red Parsley, titles based on movies, TV shows, etc, are generally not of a very high standard to say the least. For this reason, with the occasional exception, I'll be taking a look at them here via these 'Round-Ups' to save myself any potential trauma. Who knows, maybe I'll stumble upon a decent game or two in the process! Here's the first random five selected from the Master System's library: 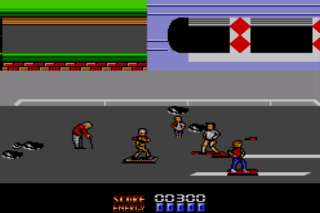 After the wondrous delights of the first film, I always felt that BTTFII was rather disappointing. Game-wise though, expectations were already low and it soon became apparent when playing the game that this was a more than justified stance! Marty's adventure here is split into five themed segments - the first and last consist of Paperboy-inspired scrolling hoverboard chase/avoid sequences, the second charges you with retrieving Jennifer from her house via an overhead puzzle stage, the third is a scrolling fighting stage, and the fourth is a sliding puzzle. Sadly, none of them is particularly enjoyable, and that's assuming you even reach any beyond the first which is unfair and highly frustrating. The music and presentation are pretty good but the in-game graphics are quite poor which, along with the annoying/boring gameplay, means this game probably won't even appeal to fans of the films, nevermind anyone else... 4/10 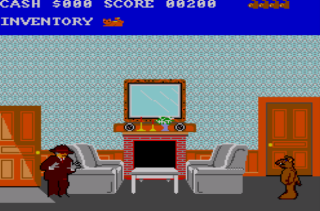 I was never the biggest fan of this cretinous alien creature but he did somehow achieve a good level of fame in the late 80's so a game based on his tomfoolery was inevitable I suppose. There were actually several different ones for various systems but this one was a US exclusive. It takes the form of a side-viewed, flick-screen (mostly) arcade adventure set in and around ALF's house in which numerous items are hidden. His objective is to find and repair his spaceship and the items either help him to do this, offer protection from some of the malevolent occupants, or allow access to other areas of the surprisingly spacious house, but will you enjoy exploring it? Probably not to be honest. I quite enjoy some examples of these games and this one isn't too bad in theory but the graphics and sound are no better than average and some awful collision-detection make proceedings rather frustrating to say the least... 4/10 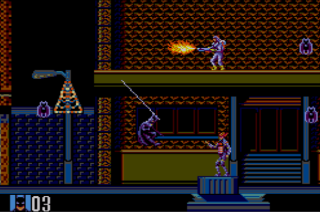 Batman fever was everywhere with the arrival of Tim Burton's 1989 reboot which inevitably led to the release of many games, and this continued unabated when its sequel appeared soon afterwards. The only one I ever played was the Lynx version, which was far too difficult, so I'd hoped for a more enjoyable experience from this MS version which is a platform/combat game somewhat akin to the original Shinobi. Instead of utilising ninja skills to clamber up and down multiple stories, however, Batman must make use of his 'Batarang' grapple thing, and it's here that the game falls down. Swinging around on a rope sounds pretty cool - it's mighty cool in some games - but control of it here is 'ropey' (har har!) to say the least! Being serious though, it can be very frustrating, and rather ruins what could've been a fairly decent, if somewhat gloomy game. Very, very patient gamers may get a good amount of enjoyment out of this but I'd have thrown my joypad through the TV screen long before then... 5/10 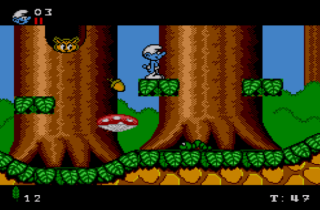 These little blue creatures still freak me out a bit and, while there are quite a few games based on their possibly-sinister exploits, this is the first one I've been brave enough to try. It was released on a number of systems and takes the form of a side-scrolling platformer which charges you with rescuing some kidnapped Smurfs from some clot called Gargamel. The music is catchy, the graphics are quite nice, and the jumpy, bottom-bouncing action is occasionally broken up with secret bonus rooms as well as other bits and pieces such as navigating a shark-infested river or riding a sledge down an obstacle-strewn hill, and it works really well. The controls are okay, although I never found myself trusting them completely, but there's plenty to see and do here with lots of bonuses and things to collect. It can be a little unfair and frustrating now and then, and it's hardly original, but I actually had a lot of fun with this one... 7/10 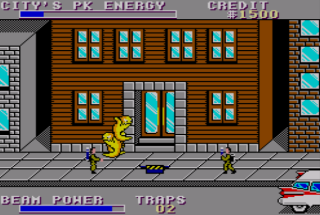 I took a look at the MegaDrive version of this recently and it wasn't too bad. This version, however, is a completely different game but one which I remember being well-regarded by magazines of the time. Playing it now, without the benefit of instructions, reveals a confusing game which it took me a while to work out. First of all you get some money to spend on supplies (including a car), then you have to identify trouble spots on an overhead-viewed map of the city, drive there, again viewed overhead, and then take out the ghosts present. The latter part is the most difficult, requiring the correct equipment as well as perfect timing. At first I had no idea what I was doing and the controls did seem a bit unresponsive, but after some practise this becomes a fairly enjoyable, if somewhat repetitive game... 6/10


Red Parsley will be back with some more Master System mini-reviews soon! :)
Posted by RetroKingSimon at 20:18