There really are an amazing number of talented, dedicated fellows out there making these doujin shmups and, while their quality is understandably variable, something that almost all of them have in common is that they’re vertically-scrolling games. As I discovered with the last post in this series, however, there are exceptions. Isometric games are quite rare regardless of genre or who made them but horizontally-scrolling shmups are, or at least were, as popular as their overhead brethren, so it’s rather bizarre that there are so few fan-made examples. Luckily, there are one or two as I recently discovered completely by accident. 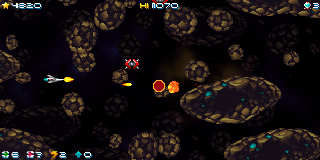 Unveiled fairly recently by a Spanish (I think) programmer who goes by the name of Locomalito, Hydorah is not only a horizontal-scroller but also one bereft of many qualities usually found in doujin releases. In fact, what it immediately reminded me of was an Amiga game, and that's something of a mixed blessing. The story is a very simple one typical of the genre - an alien attack fleet known as the Meroptians have ambushed us and destroyed our army. The only means of armed response was via a squadron of combat planes which must be flown by one heroic pilot across sixteen stages brimming with Meroptian defences and guarded by evil bosses. 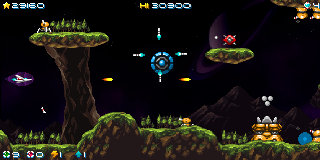 The 'combat planes', which are actually Vic Viper-like super space fighters, are capable of deploying a wide range of weapons comprising one of each from three categories - primary, secondary, and power. You only start with one primary weapon though, obviously - a basic forward shot dubbed a 'Railgun'. Fortunately, there's tonnes of pick-ups (orbs) which are dropped by several different enemies. The most common orb alternates between green and red and gradually powers-up your primary and secondary weapons respectively. Another alternates between blue and yellow and awards you with either a speed-up or a power shot, although you can only have a maximum of three each. There's also a purple icon (one-hit shield) and a heart (1up). 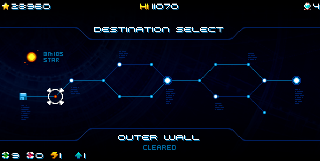 Like many shmup gamers, one of the highlights of playing these games for me is finding and using all the different weapons. Here, there are a total of five available in each category. Primary weapons include things like wave shot, laser, plama etc, while the secondary ones include Gradius-style missiles, mines, drones, and things of that nature. The power shots are of course much more powerful one-off shots like super-missiles and walls of fire and are best saved for the tough boss fights. As mentioned, however, you can only choose one of each weapon type. These are selected before each stage but you'll have to earn them - you only start with the Railgun and new weapons are unlocked as you progress through the game. 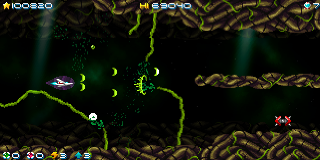 Choosing the right weapons is very important too - as you've probably noticed from the map screen above, there's a lot of stages to battle your way through! Indeed, there's a mighty impressive sixteen of them here and most are divided into several sections - twenty-seven in total. You don't have to tackle every stage though, as there are two points where you can choose a route through the enemy's forces. Each main stage is set on a different planet and so features unique background and foreground graphics. The latter are really nicely drawn but the former are mostly very dark. This was done on purpose to enable you to see the enemies and their shots clearly and it's a great idea, especially for a game this tough! 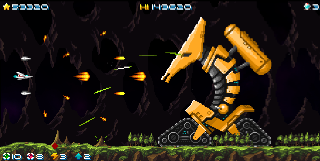 There are supposedly over seventy different enemies through the game and they're all sharp and nicely detailed. Most are ships, some of which move in predictable patterns while others home in on your position. Most stages also have plenty of rocks or structures at various points in the middle of the screen and these, along with the rest of the scenery, are usually home to many mobile guns which, aside from the bosses, probably cause the most problems - they're constantly shooting and always directly at you too! Those bosses though... Not only is each stage guarded by one but so is each of the 'sub-levels' as well, and most of them aren't easy to say the least. Some are pretty big and they fire fast shots which means you don't usually have much of a chance to react.

Their design is mostly superb though, at least. The harsh difficulty of the game means I haven't seen them all yet, but the ones I have seen look great - nicely coloured and animated, and just as importantly, very memorable! Boss or not though, there's stuff all over the place here. Control of the ship is nearly flawless but it's still easy to lose a life. A single hit from any enemy, their bullets/missiles, or the scenery, will do it and you'll have to start the stage/section again with all power-ups reduced by one notch, although if you're in the middle of a boss fight you'll only need to start that again rather than the stage from scratch. If you succeed, you'll have the option of saving your game, but that still hardly makes it a walkover!

The enthusiastic blurb for this game, as featured on Locomalito's decent website proudly flaunts the savage difficulty of their game - ‘hard but fair’, they say. Technically this is true. I have yet to encounter any impossibly hard parts where there’s absolutely nothing you can do to avoid losing a life, so it’s not beyond the realms of reason that it could even be 1cc’d by some supernaturally-skilled shmup fiend out there, but it’s still really tough going, almost unrelentingly so in fact. I’d like to think I’m a reasonable shmup player but I found Hydorah to be the hardest horizontal-scroller ever - Locomalito have clearly modelled their game on many of the classics of the 80’s but it surpasses them all in difficulty!

Which reminds me - something else they’re very happy with is the ‘old-school’ feel and design, and this is without question my favourite aspect of the game. It’s not original at all, taking its cue from many famous and a few less famous shmups of the bygone era including, to my eyes, Gradius, R-Type, Gates of Zendocon, Project X, and even Turrican, but it looks fantastic! Presentation is superb with a great menu screen, short intro, titled stages, snippets of cool robotic speech, and the soundtrack by Gryzor87 is outstanding. Not only are the tunes atmospheric but they also last for as long as each stage does which means no looping or repeats. Being quite the fan of video game music, I find this sort of attention to detail most admirable. 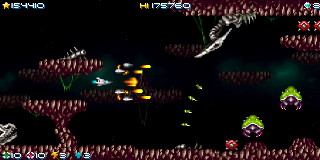 It’s not just the music either. Some of the stages are quite short (the first is only about four screens wide, although some are a couple of screens tall) but they’re all superbly designed, smooth and addictive to play through, and there’s some great little touches there too. There are six secret ‘Easter eggs’ to be found, for example, and flying your ship through small gaps or making risky manoeuvres often earns you bonus points as well. If this was a full-price release, there really would be very little to complain about, so considering it’s a free indie game, it’s quite amazing really! As skillfully made as many of these games are, most are lacking in one area or another – too short, a bit ugly, iffy design – but everything here is spot on… except for that unforgiving difficulty!


There's an official trailer for Hydorah - watch this and tell me it doesn't look awesome!