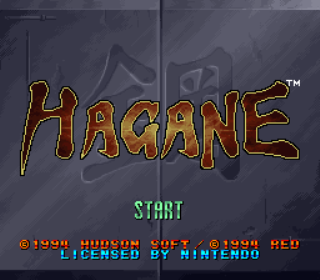 Like many systems, the poor old SNES saw a lot of decent games released near the end of its lifespan which were missed by many gamers with the eyes on the next generation of consoles. I took a look at one of these in the last post for this feature and, like that game, Hagane is another one I knew almost nothing of until many years later. If I told you it's a game featuring lots of ninjas and rival warrior clans you'd be forgiven for thinking it was set many hundreds of years ago, but this ninja game is a little different. There are two main clans - the Fuma and the Koma, both of whom have mastered various mysterious and magical arts, but one of whom is of course evil. The object of their desire is the Holy Grail which has "a power that can destroy the world". I'm not sure how it made it to Japan, nor why the Koma clan should seek to use it to destroy the world - surely if they did that, it would take them with it? Oh well, nit-picking aside, it's time to cower in fear as they've managed to half-inch it from its guardians, the Fuma clan!

While in pursuit of their quarry, the Koma clan also sensibly slaughtered all who stood in their way... or so they thought, but one brave soul survived - Hagane! Although his body was mortally wounded, his brain was not, and it was subsequently placed into the body of a ninja cyborg by a mysterious, though apparently highly-skilled fellow called Momochi. Hagane, filled with a renewed vigour and keen to test out his new abilities, sets off to take down the entire Koma clan single-handedly and retrieve the Holy Grail. There are five levels to battle through, each with a Castlevania-esque name - The Path to Disaster, Fortress of Doom, Violated Heavens, Cry of the Spirits, and Into the Darkness - and Koma soldiers and devices predictably occupy each in sizeable numbers. Hagane's most basic attack is a Strider-style sword and it initially seems as though the game merely consists of trotting through the stages slashing wildly at everything that moves but, being a cyborg, he actually has a good few more ways of dealing with them than that.

Random presses of the buttons (who needs instructions?!) quickly reveals that Hagane actually starts the game with four standard weapons - the aforementioned sword and a chain, both of which can be used as much as you want, and shuriken-like throwing knives and small explosives which cannot. He can only use one of them at a time and he also has a limited number of visually-impressive smart-bomb-style special attacks (which was of course the first button I pressed!). But that's not all! More messing around with the controls revealed a surprising number of possible moves. From mid-jump he charge forward or drop a flamey kick towards the ground, he can slide along the ground, and he can perform a 'tumble' in either direction using the shoulder buttons. Doing this apparently makes him perform cartwheels for as long as you hold the relevant button. He can perform an attack whilst doing this but if you wait until he starts flashing yellow he'll perform a small fiery twirly kick, and if you wait until he flashes blue he'll summon a much more powerful fire attack!

That's still not all either! Our cybernetic hero is capable of hanging from ceilings and moving back and forth along them, again like Strider, and the chain weapon can hoist him up there if his jump isn't enough. Lastly (unless I'm missing any more moves!), he can also jump off walls and/or somersault back and forth between them, Super Metroid-style, to reach higher areas. Phew! I think it's safe to say Red went to town on their main character and his many abilities, but did they build a decent game around him? Well, it'll certainly last you a good while - there are between two and five stages per level and, whilst far from a short game, its longevity is more down to its rather challenging nature! It's hard to pinpoint exactly what makes it a tough cookie though. Hagane starts the game with a three-hit energy bar (which can be extended by two) as well as having three lives (and again, more can be added), for one thing, and the enemies aren't among the most brutally testing of all-time either.

They come in all manner of shapes and sizes but they most commonly fall into three main 'categories' - small creatures such as birds which respawn, various types of soldiers/warriors which do not, and machines, some of which often float menacingly in hard to reach positions. Some of the soldiers are armed with swords, others with guns, and the larger devices usually either shoot at you, drop bombs, or even drop soldiers. Each level ends with a boss fight, as do most of the stages as well, but surprisingly, neither these nor the standard enemies hurt Hagane to touch, just their weapons, shots, or any action that obviously looks like an attack. All enemies but the smallest and largest drop an icon when they're taken out, and some drop more than one. These can include orange fire (refill one energy point), blue fire (extend energy meter by one), 1up (extra life), an oriental symbol (another special attack), or more knives/bombs. You can switch between weapons while the game is paused which can be very helpful in a tight spot, and your energy is refilled after boss fights.

See what I mean? All this stuff, combined with Hagane's extensive selection of moves and attacks, must make it seem like a walkover. But it's not. This is due in part to the design of the stages which can sometimes prove to be rather unfair. A giant worm appearing from beneath you, for example, or a gap opening in the floor as you happily run along. Some sections also feature groupings of enemies which it's next to impossible to take out without receiving at least some damage (lest using a precious special attack). There's also a time-limit which is sometimes more than ample, but other times very strict, and if you run out, not only do you return to the start of the stage, but you also lose any extra energy blocks you've collected. Unfair or not though, there is some nice variety between stages - some are left-to-right slash-a-thons, some are long, multi-tiered platformy affairs, others are auto-scrolling jump/dodge fests, one has a shmup section (kind of), and some are even just quick boss fights. I suppose that could be another reason for the challenging nature of the game - you never know what to expect!

Unlike some games that try to force some variety into a game and leave it feeling disjointed, it works really well here and is, along with Hagane himself, the best thing about the game. Hagane and his movements were clearly inspired by athletic fellows like Strider and the game plays like a cross between Capcom's game and something like Revenge of Shinobi which probably sounds tremendous, and it is for the most part. As good as it is, Hagane doesn't quite have the atmosphere or feel of either of those classics, but it's not too far behind. Besides its varied nature, it's a game made in such a way as to provoke some experimentation - most of Hagane's moves were discovered by reaching an otherwise impassible section where trying new things usually yields positive results, and this is probably my favourite thing about the game - as well as featuring frequent combat, there's not so many enemies so as to overwhelm you and the game also keeps the grey-matter ticking over as well - not too much but just enough.

Having said that, the enemy AI is pretty crap with most enemies simply repeating a basic pattern over and over, and rarely reacting to Hagane's presence, even if you start shooting (or 'swooshing', as will more often be the case)! Most of them look pretty cool though, or the humanoid characters at least. The detail isn't the greatest with even Hagane looking a little pixellated, but the colours and design of most of them is decent enough and they all look suitably warrior-like with their traditional samurai/ninja outfits replete with metallics bits and pieces. They do look quite impressive as they each unleash their systematic fury on you and there's some good animation in there too, especially the explosions (nearly everything explodes - the Koma clan must all by cyborgs as well!). The flying vehicles/objects aren't bad either, and the foreground scenery and platforms look good even if they aren't as varied as they could've been. The backgrounds are probably the least impressive visual aspect of the game - some are nice, great even, but most are too dark, uninteresting, or both.

The presentation is pretty decent though. Despite not actually featuring a great deal, the title screen is nice, and there are a few other intro and between-stage screens as well. The music is very much Far-Eastern flavoured which obviously suits the game, and they're mostly good pieces as well, although a little crackly at times, and help make playing through Hagane an enjoyable experience. It has a lot of stages and it'll take a long time for the average player to see them all, but the way is filled with lots of memorable sections as well as a good few annoying sections as well! The boss fights aren't generally too bad - most are quite creative, both in concept as well as appearance, but it can be a really unfair and frustrating game at times. It's clear that Red have put a lot of effort into it though, especially its main character, and most of their ideas work well. With some more engaging backgrounds, a fairer and more balanced difficulty level, and a bit more character, Hagane could've been one of the best games of its type, but it's still a solid, challenging platform/combat game that's well worth seeking out if you were among the many who missed it.