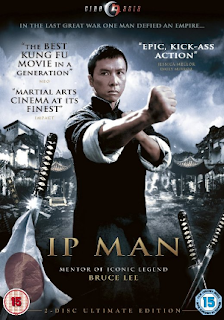 Even after all these years, the biggest martial arts screen icon is surely still the immortal Bruce Lee. He was born with a lot of natural talent which was put to good use during his short life, but any amount of talent needs to be nurtured and refined. Who did that for Mr. Lee? That would be Wing Chun master, Ip Man. We meet him in the 1930's as a 40-something resident of Fushan, a southern Chinese city which is home to many martial arts schools. As an independently wealthy man, none of them are run by Ip (Yen), but he is the most skilled and respected martial artist in the city and frequently trains and spars with local masters. Aside from that, he spends his time in a fairly slouchy manner with his friends or family. This near-idyllic life is, however, brought to an abrupt end by the Japanese invasion of China in 1937.

The sudden arrival of the brutal Japanese armies soon changes the lives of everyone in Foshan including Ip and his family. Their large and luxurious house is swiftly claimed by the invaders to serve as their headquarters and Ip finds himself working in a coal mine to support his wife (Hung) and son (Ze). The unnamed Japanese general (Ikeuchi), however, is a karate champion and soon establishes an arena where Chinese workers are offered the chance of competing with his own trainees for the grand prize of a bag of rice. Ip is eventually dragged into the arena and soon catches the general's eye. This and many other events in the film are supposedly based on the real Ip Man's life but, although technically a biopic, some significant liberties have been taken with historical accuracy here as you might expect.

The impact of the war on Ip is exaggerated, for example, and the ending is much 'tidier' than the real events too. It also makes a big deal about Ip Man being Bruce Lee's master and yet the film itself features no references to him. Regardless of all this though, Donnie Yen owns the main role. He and indeed all the main actors are more than competent in their respective roles but, as is usually the case with films of this nature, a keener eye will be cast over the fight scenes than the acting. This was an aspect I was a little unsure of prior to watching but any fears I had were soon put to bed - there are a good few action sequences, mostly featuring Mr. Yen's truly remarkable talents of course, and all are fantastically filmed and choreographed and include no CGI or wire work - one of many highlights includes Ip taking on an arrogant northern master with a feather duster! These outstanding scenes along with superb direction and a genuinely engaging main charcter make Ip Man one of the best martial arts films in a while, even if it doesn't feature Bruce Lee.