When I first started watching anime it wasn't particularly popular here in the UK, to my knowledge at least, so rather than reading the non-existent articles and reviews in magazines, I had to more or less choose them randomly and hope for the best, and this is exactly how I discovered Revolutionary Girl Utena. 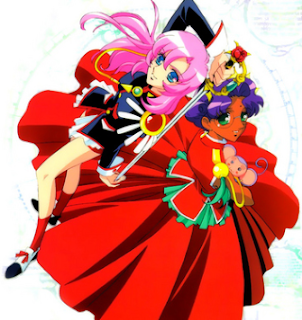 Part of the appeal of RGU was admittedly the suggestive nature of some of the associated artwork (tee hee!) but it's actually a considerably darker show than it might initially appear and has a rather complicated storyline that requires more than one viewing to even understand, at least for dimwits like me. The star of the show is unsurprisingly the girl of the title, Utena, who is indeed revolutionary, or supposedly so anyway. She is a pupil at Ohtori Academy, a fictional Japanese high-school, where she is an unusual student. She lost her parents at an early age and was consoled by a mysterious price who left such an impression on her that she decided to become a prince herself which resulted in her unique dress sense and mannerisms. While some pupils and teachers at the school find her a bit strange, most of the girls idolise her. As well as wearing what is described in the show as a boys uniform (although no one else in the school dresses like her, boys or girls), she attempts to conduct herself in as honest, gallant, and noble a way as possible, and it is in pursuit of this that she inadvertently lands herself in trouble.

Ohtori Academy is run by the academy board, but immediately below them is the Student Council. President of the council is Touga, an arrogant playboy, with his old friend, Saionji, acting as Vice President, who's engaged to the shy and submissive Anthy. Other members of the council include Juri - a noble and respected young lady who's captain of the fencing team, Miki - the youngest council member and a gifted pianist, and Nanami - Touga's cruel and manipulative younger sister whose obsession with him borders on the inappropriate.

The Council's business is generally conducted with secrecy but on the first day of a new term, Utena happens upon Saionji mistreating Anthy in plain view of the whole school. Appropriately enough, she steps in to defend the meek girl and Saionji slopes off only to later challenge her to a duel in a mysterious arena located at the edge of the school grounds. She's able to gain access to the arena by using a ring bearing a rose crest which she's had since she was saved by the price as a child. Each participant in a duel must wear a rose on their chest - the winner is the first one who can knock their opponent's rose off with their sword, gently or not. Utena, completely unprepared for the duel and knowing nothing about them, defeats Saionji by complete fluke and subsequently finds herself engaged to Anthy who she soon learns is also known as the Rose Bride and is bequeathed to whomever is the current duelling champion. Which she unwittingly now is!


The Rose Bride is always in attendance when a duel occurs, cheering on her current 'fiancé' who also has the advantage of using the Sword of Dios in his or her duels whilst engaged to Anthy. The sword is actually housed within the Rose Bride's body itself and withdrawn prior to each duel. Utena's only problem is that all of the council members wish to possess the Rose Bride who supposedly serves a much darker and more sinister purpose along with a mysterious power which can only be harnessed by someone who possesses the 'Power of Dios'. Utena also finds a strong bond developing between Anthy and herself so not only is she constantly receiving challenges but she's also desperate to protect her new friend as well.

The series was created in 1996 as a manga and anime. Both were developed side-by-side but ultimately took slightly different directions. The anime was created by some of the same team behind the popular Sailor Moon series and consists of 39 episodes (each around 25 minutes long) over four linked story arcs. The first is called the 'Student Council Saga' and introduces the main characters with one episode focusing on each of them. The second, the 'Black Rose Saga', fleshes out some of the supporting characters and introduces a few new ones. The third, known as the 'Akio Ohtori Saga', looks more closely at Anthy's older brother and acting Ohtori Academy principal, Akio, and finally starts offering explanations for the reason behind the duels and the mysterious power that all the duellists seek, and everything reaches its climax in the final few episodes known as 'The End of World Saga' where Akio and Anthy's true intentions and the dark secret of the academy are finally revealed. 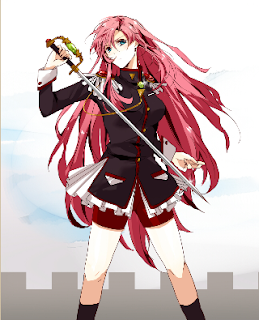 I discovered shortly after starting to watch it that Revolutionary Girl Utena is a 'shojo' series (aimed at females) but I had to continue watching it after spending money on it, and I soon found myself drawn into its unusual world. Almost the entire show is set within the confines of the Ohtori Academy itself, with the world outside its walls scarcely even acknowledged. The story can be quite hard to follow at times, too, and there may not be enough blood or nudity for some guys to become fans (or at least, to admit to being fans), but it's still probably ones of the most atmospheric and distinctive shows I've seen. It had a great visual style, from the design of the many characters to the often extravagant architecture of the buildings in the school, and its soundtrack is of particular note, possibly being even more famous than the show that features it! It consists of many original rock and orchestral compositions, even some combinations of the two, and most songs are very memorable. There's a lot of them too - I believe I eventually found seven soundtrack CD's! 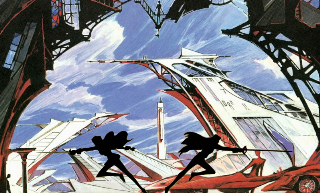 It's also a show that explores many themes including some found in fairy-tales, but they're not always portrayed in a traditional way either. There are a number of strong female characters as well as male ones, for example, and there's also a strong 'coming of age' theme running throughout the show including a romantic/sexual element to most characters. In the case of Utena and Anthy, a loving relationship is often hinted at as well, subtly here but more obviously in the film - The Adolescence of Utena - which came a few years later.

In my experience, a lot of Western anime fans seem to go for either the super-violent ones filled with huge guns and masses of grotesque monsters or one of the many filled with blatant nudity. Utena features none of this stuff but it's an anime that I'd highly recommend if you want something a bit more cerebral. Yes, it's a bit girly but it's certainly an original and creative show, even for the frequently-strange world of anime's standards, but also has a pretty complex story filled with some equally complex characters that demand your attention from innocent beginnings to apocalyptic endings. Smash the world's shell!

Check out the opening sequence here: