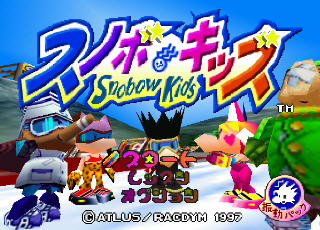 Although most gamers fall into the former camp, Super Mario Kart has always been something of a love/hate game for me – absolutely brilliant and incredibly frustrating in equal measure. However you feel about it though, one thing cannot be disputed – its enormous success quickly led to countless similar games appearing on pretty much every system available at the time and for a good while afterwards as well. Indeed, this was still going on with the subsequent generation of consoles including the N64. By now, however, another type of game, also derived from the racing genre coincidentally, had become very popular as well, this time based on the ‘radical’ sport of snowboarding. Even though Nintendo had already unveiled their long-awaited sequel – Mario Kart 64 – as well as their own snowboarding game – 1080° - that didn’t stop Atlus from putting their own spin on both burgeoning sub-genres – with the same game! The result, as if you hadn’t guessed, was Snowboard Kids. 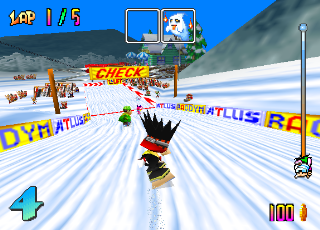 The fairly predictable result of this amalgam was of course a cartoony, arcadey racing game… on snowboards! This basically means it looks more like 1080° but plays more like Mario Kart. Accordingly, there are five characters (plus another secret one) to choose from, all of whom vary with regards to their speed, jump height, and turning ability, as well as ‘attitiude’, obviously. As you might’ve guessed, this means they can jump at will, and that means – tricks! Indeed, they can perform basic leaps, twirls, and board-grabs by combining different directions with the jump button, but each character also has a few ‘special moves’ too. These as well as all other basic moves can be practised in the Training Mode before playing the main game. Any trick, special or not, earns its performer gold coins if executed correctly but if you’re not careful it can also result in a tumbling mess on the snowy landscape! 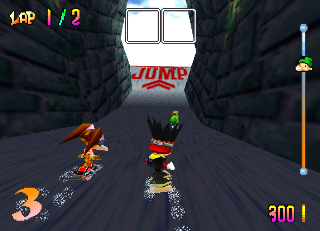 Any of the characters can be used in any of three game modes offered. The first of these is the Battle Game which is basically the arcade mode. There are nine courses altogether, although only the first six can be chosen to begin with. Races are contested by four ‘boarders over two-to-five laps depending on the course length. In case you’re wondering how there even can be laps of a ski-slope, there’s a handy ski-lift at the bottom of each which whisks you back up to the top as many times as is necessary. If you win the six courses, the first secret one will be unlocked; win that, then the next one is unlocked, and so on. Each course features coins scattered here and there, which contribute toward your gold reserves, as well as two types of box – red and blue - which each cost a hundred gold to access. If you fall short you’ll just bounce off with the resultant loss of speed and time, but otherwise you’ll collect the item inside. 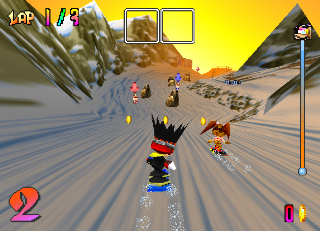 Red boxes contain weapons which allow you to bomb, freeze, or get rid of other racers in various other crazy and entertaining ways while blue boxes contain less weapon-ish items such as a speed-up fan or invisibility, or ones that impair the progress of your rivals by slowing them down or even flattening them with giant frying pans! Despite the absence of any sort of championship mode, it’s this mode which will occupy most of your time, especially considering it can be played by up to four players at once. As you might imagine, this can lead to some pretty chaotic races! There is also a Time Attack mode though, as well as one called Skill Game which is divided into three mini-games – Speed Game, Shot Game, and Trick Game. The first two take place on standard courses, but instead of racing opponents you have to either finish a course as quickly as possible (with the help of many fan power-ups) or shoot as many snowmen as possible. The trick game obviously charges you with amassing as many points as you can by performing tricks in a special half-pipe course. Before starting any of the play modes, the characters initially have the choice of three different types of board – Freestyle (best for tricks), All Around, or Alpine (best for speed) – with several other ‘special’ boards available to buy later. There are three ‘levels’ of each board offered in the shop where you can also customise their design. A surprising amount of variety can also be found in the courses themselves. Some are fairly generic (though feature-packed) snowy slopes, but others are themed and some don’t even feature snow! There’s one set at night, another takes place in and around a theme park, and there are grassy and sandy ones too, for example, and it's these splendid raceways that (probably) comprise my favourite thing about the game. 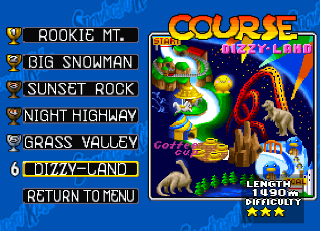 Each of them has lots of features such as small bumps as well as big jumps and a few forked paths, and some obstacles such as rocks as well. It's not an especially fast game but control of all the characters is pretty much spot-on, as you would expect from the N64's splendid controller. Performing tricks can be a little fiddly to start with but it's fine after some practise, and it's possible to glide as smoothly or as sharply around corners as you want. The presentation is really nice too - all the menu and stats screens are clean and simple and the in-game graphics are quite lovely for the most part. While probably not testing the technical limits of the machine, everything is crisp and tidy, surprisingly colourful, the cartoony sprites are appealing, and the courses are superbly-designed. Even better is the fantastic music. There are eighteen boppy tunes in all with each seemingly catchier and more melodic than the last! 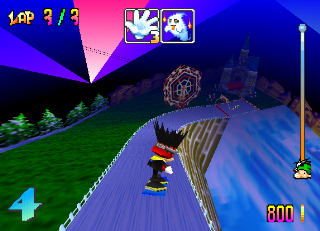 So, with great audio/visuals and top-notch course design, this must be a pretty awesome game, right? Well, I thought it was very awesome at first – sliding down attractive slopes, casually avoiding obstacles, doing twirly tricks off jumps, but the longer I played the more I noticed the game’s only real problem, which proved to be a mighty frustrating one – the cheating AI. Yep, that’s right – just like most incarnations of Nintendo’s pesky kart racer, in one-player mode the computer-controller racers here are luckier, perfect shots with their attacks, and increasingly relentless in using them. I defy any gamer to not become enraged when they get flattened by a bloody frying pan five metres from the finish line – grrrr! It’s a shame too, as I’ve really enjoyed this game many times, both on my N64 over the years and via emulation for this review, but each ‘session’ is usually interspersed with brief but furious rages too. 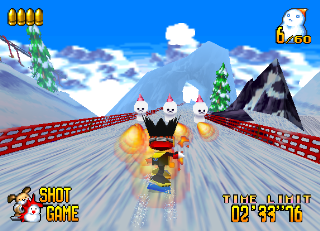 Of course, this problem pretty much disappears in four-player mode so that’s the way I’d recommend playing it, assuming you have four retro-gaming friends, as well as four control pads of course. Which I do not. So that leaves me and other mainly-solo-gamers with a Battle Mode which will involve anger as often as enjoyment, or the mini-games, which are good fun but they are mini-games too. I’ve actually known for a while now that Snowboard Kids received a sequel but I never did get around to trying it. It’s therefore my sincere wish that the single-but-serious problem this game possesses has been rectified therein. Ultimately, though, this original is a good game and tremendous fun, even for one player nevermind four, but it could've been one of the best games of its type on any system if it hadn't copied Mario Kart's most annoying feature a bit too closely...