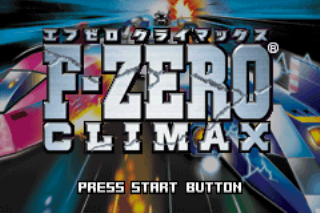 It sounds quite scary to say but, at the time of writing the F-Zero series has reached a somewhat startling 22 years old! In all that time, the concept of the game has changed very little over the course of eight releases on four very different systems (or five if you count the 64DD) but has the series evolved technically? The first three releases were all rather ahead of their time from this point of view - the SNES original wowed gamers worldwide with its use of Mode 7, the N64 game was blisteringly fast and turned the previously flat courses into nauseating roller-coaster rides, and the GameCube title brought all the details and special effects bang up to date, but aside from the 'data disk' releases, the other games in the series have been exclusive to the Game Boy Advance and have accordingly reverted to the style of the original game. F-Zero Climax constitutes what is to date the last game to bear the famous name, but does it continue this trend, or give the series the send-off it deserves? 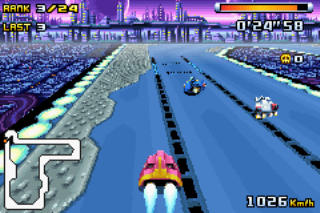 Well, the first and possibly strangest thing I learnt about Climax is that it was exclusively released in Japan. Apart from that it seems to pick up where the previous two GBA releases left off. With a few differences, obviously - some stuff is gone, some stuff has been added, but the main game mode remains the Grand Prix series which has been modelled on the one from F-Zero X. The total number of characters in the whole game is a series high - thirty four - and consequently includes a few new ones as well as many familiar faces (and associated machines) from the N64 game. Grand Prix races, however, are each contested by twenty-four racers. Before getting started, you get to choose from the usual four default racers as well as Ryu Suzaku, the hero of GP Legend, all of whose machines differ in the usual ways. After this, choose between three difficulties, then choose a league (Bronze, Silver, or Gold), and you're off! 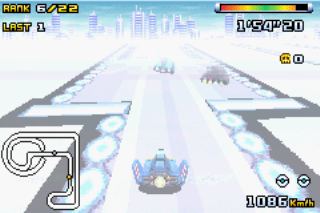 There's no tinkering with the acceleration/top speed ratio this time, nor even the ability to change your machine's colour - a brief preview screen is about the extent of your preparation for each race of which there are five per league, each consisting of three laps. The courses are all new with regards to their layout but are based on themes and/or locations from previous games - there are various examples bearing the usual names (Mute City, Big Blue, Port Town, Red Canyon, etc) as well as a few based on locations introduced in GP Legend as well (Mist Flow, Lightning, Illusion), and they include most of the usual features - slow down patches, icy areas, dash plates, minefields, etc. Points are awarded to all twenty-four racers regardless of finishing position, although the higher you finish the more you’ll get, obviously. 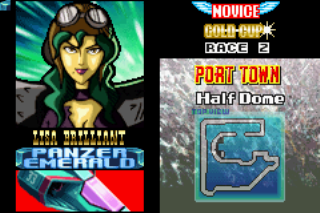 There’s plenty of stuff to unlock here too, and most of it is done via the trusty Grand Prix mode. Successful completion of the various cups will gradually unlock the other racers and their respective machines - one per cup per difficulty, and a different one for finishing the cups in first place too. It’s also possible to unlock a few more play modes. The Zero Test mode returns from GP Legend and, while there’s no actual Story mode this time, there’s is a mighty similar mode called Survival which is divided into three parts – Tour, Challenge, and Battle – each of which pits you against various (presumably ‘bad’) characters on normal courses but with special conditions such as a slalom race or not dropping below a set speed throughout a race. The last play mode, however, is a brand new one (sort of ) - the Edit mode. 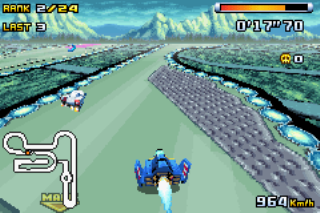 This, as you may have already guessed, is a track creator and editor and is pretty darn good! You first have to choose a course 'theme' (i.e. background and music) but the design of the course itself is entirely down to you - a huge variety of track sections, corners, obstacles, and features like the usual jumps, dash plates, recharge zones, slow-down patches, etc, are available as well as an impressive thirty save slots so you and your friends can enjoy your grandest creations over and over again! The only slight drawback here is one that blights a few other areas of the game. Since F-Zero Climax was only released in Japan, many of the menu and options screens are in Japanese. Most screens won't take too much experimentation to 'crack' though, so it's hardly a game-breaker. 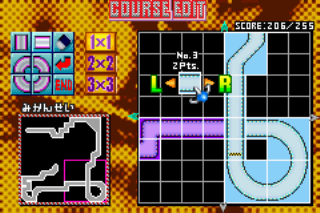 My first stop when trying this game out, though, was the Grand Prix mode as usual, and the first thing I noticed was the difficulty which seemed way higher than any previous F-Zero game. I’m not sure if this is because it's a Japan-only game (I think they have tougher tastes) but I found myself finishing races in 8th, 10th, even in last place on one or two occasions. This was uncharted territory for me, I’ve been pretty awesome at all the prequels, even on the highest difficulty levels. Oh well, it’s still not an impossible challenge and at least it means you have to actually work for the unlockable stuff now! Having said that, it’s actually an easier game in one way – if you go off the course, rather than having to start the race over as before, you can now resume from the point of the crash. You’ll probably be in last place but still! 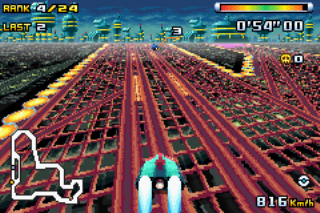 We're back in familiar territory with regards to the aesthetics though. The graphics seem slightly more grainy/pixellated than previous efforts, the colours seem a bit washed-out to my eyes, and there's a fair bit of slow-down when more than one racer is visible in front of you, but a bit more effort has been put into the backgrounds to make up for it (or perhaps caused it). Apart from that things are more as less the same as GP Legend, including the usual 'arranged' versions of all the classic tunes. The sense of speed is about the same too, despite the speedo indicating speeds that could only be reached by multiple boosts in previous games. This is all stuff we've seen before though, apart from the edit mode. Actually, if you had a 64DD you might've even seen that before too. But anyway, you may now be wondering the same thing as I was - is Climax a fitting finale for the series? 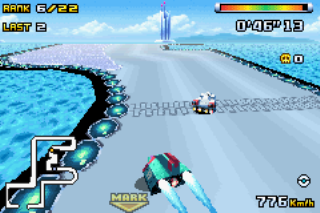 The short answer is: sadly not. The series arrived with a bang and it quickly looked as though it would be yet another of their flagship franchises, but then Nintendo seemed to quickly lose interest in the F-Zero name. As early as the GameCube game they passed on development duties to a third party and then apparently forgot about poor old Captain Falcon and chums. If this does prove to be the final entry in the series, it's not the dazzling spectacle that it deserves. Don't get me wrong, if you love F-Zero, you'll at least very much like Climax - as a standalone game it's great, and it'll probably last you a good while, what with all the play modes and difficulties and everything (the secret platinum cup is a toughie too), but as good as Climax is, it's still sad to see the series peter out like this. C'mon Nintendo, get yer arses in gear and give F-Zero the attention it deserves! You never know, I could even be persuaded to get a Wii U or 3DS if the right titles appeared on them...