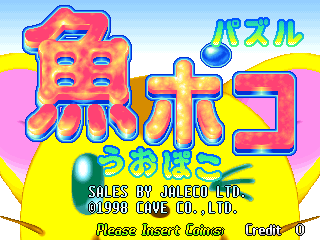 It’s a sad fact for many of us that arcades have become a critically endangered species in recent years. I live in a seafront city which actually had many arcades and still has a couple, but the number of actual games in them is now very few. Over in Japan, however, the situation is a little different. It makes sense I guess – most companies that still make these kinds of games are Japanese, and one that has developed a strong cult fan-base in the last fifteen years or so is Cave. I’ve heard the name so many times but haven’t really had the opportunity to play any of their games… until now. However, considering their fame is exclusively down to their unique brand of crazy bullet-hell shmups, it’s ironic that my first taste of Cave-ness comes via their first, and to my knowledge only, puzzle game!

Despite featuring few of the traits their shmups are famous for, Uo Poko does rival some Cave games for strangeness. For starters, the stars of the game are two water-loving cats! There are two titles screens, one of which features a cat indulging in some scuba-diving while the other sees him enjoying a spot of fishing (and getting a rather large bite). The game itself takes place beneath the surface as well and consists of thirty single-screen stages. The play-field of each only takes up about 50% of the screen and is filled with small spheres of various colours which does of course mean... Uo Poko is a colour-matching game! Your cheerful-looking cat launches new spheres (which could be pearls or something, given the underwater setting) via a pinball-style springer on the left of the play-field. The longer he pulls on the chain, the further the pearl will fly into the pit.

The magic number of pearls you need to match is three as usual but unlike most colour-matching games, the pearls here do not stick to each other - if one lands on an angled slope, they'll roll down until they're able to settle. Aside from that it’s pretty much business as usual. If you do manage to group three or more pearls of the same colour, they’ll disappear in a suitably gloopy manner. There are also a few ‘special’ objects including glass pearls (usually covering an otherwise easy grouping), bombs (which obviously destroy some of the surrounding pearls), and glowy things which turn the same colour as the pearl that hit them (and then vanish as normal). All of these special pearls require a direct hit to use – if your fired pearl merely rolls down onto a special one, it will have no effect (and it will also then get in the way of subsequent shots), so it’s a real test of your aiming abilities.

To help you get used to this, the first two stages of each credit has a dotted line to show the path of your shot. It’s not exactly rocket-science to begin with but an accurate aim is a must as there’s an egg-timer to the side of the play-field. Once this runs out, each unsuccessful shot raises the floor by one notch and, as if you couldn’t guess, if any pearls reach the top of the screen, it’s all over. The only help you can expect when things start getting hairy is a small submarine which appears when your pearls reach a certain height. Hitting this causes it to unleash an Independence Day-style blast directly downwards with an appropriately destructive outcome. However, relentlessly launching pearls in a desperate attempt to hit it can make things worse too! It’s never too bad though as, being an arcade game, credits are available for as long as you keep pumping in coins. You even keep your score!

As mentioned, my experience of Cave games is rather on the limited side so I’m not sure if the visual style used here is typical of their work but I do know that I like it! The pearls and the swirly flashy stuff that results from their interaction is fine, but the cats are particularly amusing – their expression and behaviour differs depending on how well you’re doing. If you’re really lucky with a shot, you’ll trigger a chain-reaction which sees our happy felines somersaulting and meowing with glee! The backgrounds are really nice too. A new one is revealed every couple of stages and your little submarine moves to a new location within some sort of trench on the ocean floor after every six stages. They all feature various watery things and all sorts of colourful fish and other aquatic creatures swimming around and, along with the catchy and leisurely music, help make Uo Poko a rather relaxing game to play.

Until your stack of pearls nears the top of the screen, of course, at which point the music goes all frantic and your cat starts panicking! It’s all good fun though, for one player as well as two. Talking of which, the latter is surprisingly a co-operative mode which sees the two cats combine their efforts to clear a wider play-field of colourful pearls and extraneous bits and pieces rather than trying to dump said bits and pieces on each others individual play-fields! Even so, it’s hardly an innovative game and will immediately remind most gamers of Puzzle Bobble amongst others and indeed, it is quite similar. Luckily, it just about differs enough and, thanks largely to the tranquil backdrops and excitable cats, has a lot of charm and is just as enjoyable to play as Taito’s classic bubble-popper. Not the kind of game Cave are famous for but it’s still one that’s well worth playing.