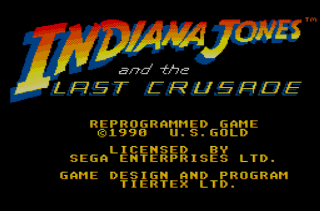 As mentioned in the first post for this feature, I've always been very wary, scared even, of games based on movies. This fear is well-founded for the most part which is why I'll be looking at most of them as briefly as I can in 'Round-Ups'. A few of them will be granted my full attention however, if there is a merest whiff of quality about them. So for the second part of this feature I thought I'd take a look at an example I hadn't played previously but which is supposedly non-horrifying. In fact, I even remember it getting a few glowing reviews including one in the high nineties! I'm quite confident that's not really the case but we could have a very rare example of a decent movie tie-in here nonetheless. Doesn't stop me from feeling nervous though... 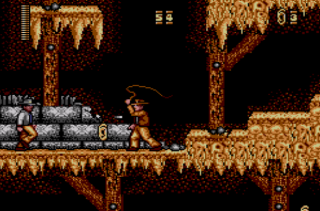 Like so many licensed games, this one, based on Indy's third movie outing, is a side-scrolling platformer through which you're in control of the great man himself. It's a quest divided into six fairly short stages, some of which contain items to collect for points such as the Cross of Coronado, a shield, and a diary, but the ultimate aim, as in the film, is to retrieve the Holy Grail. Various oafs populate each stage making seemingly token efforts to stop him and mostly consist of what looks like cowboys and Indians (chortle) as well as the odd evil creature. Indy has an energy meter but it's not always as much use as you might think. Falling from a height causes you to lose some (so far, so realistic), and being shot does the same, but if you actually touch a human enemy you'll die instantly, regardless of how much energy you had! 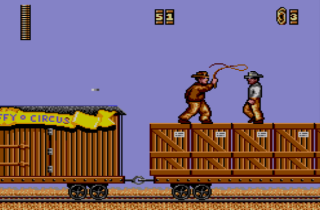 Each stage also has a very tight time limit and can only be completed by finding the egg-timers which extend the timer and also act as a checkpoint from where you'll start in the event of a lost life. Aside from the aforementioned special items, the only other collectibles are whips. Indy's default attack is a somewhat feeble (not to mention short-range) punch but each whip icon collected bestows five 'swings' upon him. These should be cherished and only used at the utmost end of need. Most of the pesky enemies respawn, for example, so wasting whips on them is foolhardy at best unless they're in your way, but most areas of the game are multi-tiered with lots of ropes and ladders and whatnot, so it's often just as easy to avoid the clots. 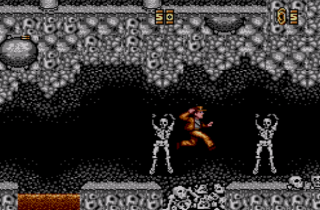 Each stage takes place in a unique location taken from the film including caverns, scary tombs, atop a train, and inside an airship, and the Master System presents them all in a pretty pleasing way too. Menus and intro screens are nice, and the sprites, though repetitive, are quite large and animated well too (well, Indy is at least). The backgrounds are generally quite plain but the foregrounds are really nice. The colours used are a little drab - mostly greys and browns - but the style and detail is decent enough. There's no in-game music but a reasonable rendition of theme tune can be heard on the title screen which creates some semblance of atmosphere and control of Indy isn’t bad either, though a little clunky at times when trying to climb ropes and the like, which you'll be doing a lot of. 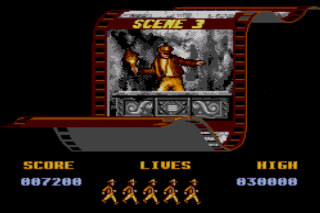 This doesn’t affect proceedings too much but it doesn’t make an already difficult game any easier. To this end, there were two main problems I immediately encountered. Firstly, limiting use of Indy’s whip makes things a real pain in the ‘behind’. You can’t even stock up on them – each whip icon gives you five uses but you can never have more than five either. The second problem is the time-limit which is rather unforgiving to say the least. If you go the wrong way, even for a couple of screens, it can make the loss of a life inevitable. For these two reasons, Indy reminded me of playing old Speccy platformers - the kind where everything was designed in such a way that you have to do everything perfectly at the perfect time or you'd fail. 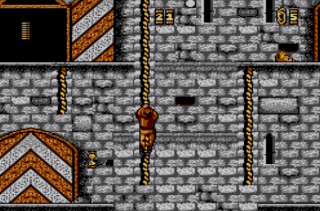 Okay, it's not quite that bad but still - the very fact that I was reminded of those games says a lot, and I did indeed fail quite a few times which almost turned me green with rage. If you were to spend enough time practising and memorising the layout and enemy placement in each stage, though, it's not an impossible game and can actually be completed in a startlingly scant ten minutes or so in what I was going to call a 'speed-run', but I suppose it's not really possible to play the game any other way. Indy fans will probably get a kick out of playing this, and they'll probably be among the few who will stick at it too, but despite the pleasing visuals, I don't think I would've stuck at it were it not for this review. It's not bad as movie tie-ins go but the MS has some far more enjoyable platforms adventures.