Sadly, I've still been struggling to embrace the modern era of gaming but one aspect that appeals to me is that of the homebrew/indie games available for download on the current systems. The first one I tried, thanks to an advert on the very first PlayStation Store screen, was this very game. I was of course initially intrigued by the inclusion of the word 'retro' but it turns out it's literally a retro game as well as being somewhat retro-ish in style. This is because, you see, it's a shoot 'em up... in reverse! What this means is, you have to play through the game in reverse 'un-firing' all your shots while avoiding all the enemy's shots which they are also in the process of 'un-firing'. Confused yet? I was too, so allow me to explain. 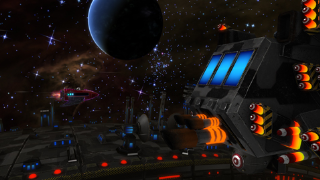 The game begins at its end - you, as the courageous Rick Rocket, are in the process of destroying the end of game boss. Unfortunately, it turns out that doing so caused a temporal anomaly that's reversed the flow of time! In order to repair the space-time continuum (lots of Star Trek-speak here), he must now undo all his destruction. Doing this takes the form of a rhythm-action game, believe it or not. There are ten stages (starting from ten and counting down, of course) through which you must 'un-fire' the coloured shots coming from the right of the screen (i.e. the ones you originally fired) while avoiding the ones coming from the left of the screen (i.e. those fired by the enemy ships). Now and then you'll also have to 'un-fight' bosses who fire lightning cannon things and all sorts of other scary weaponry too! 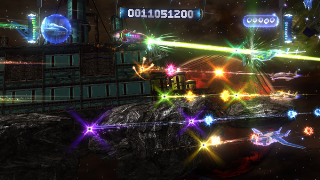 The shots you must 'un-fire' include normal berries, groups of missiles, and streams of plasma stuff, and they approach you along up to five equally-spaced lines represented by different colours. Your ship can move up and down these lines at will but can't move left or right. Pressing the appropriate button at the moment of impact successfully un-fires them but mistiming it or taking hits from the enemy shots reduces the 'health' of the pesky space-time continuum, represented by a meter in the top-left of the screen. If you make a mistake you can 'rewind' for a few seconds but you can only do this a limited number of times as it uses up fuel of which you have a finite supply. You can play the game using a normal control pad or guitar controller but, as opposed to the normal guitar games, there's only one button used. The frantic nature of the play here involves moving your ship up and down the attack lines at the right times rather than pressing one of a multitude of buttons. 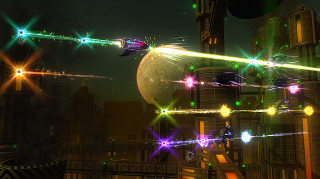 It sounds like a pretty crazy concept, I agree. I wasn't even sure how it could work to start with but after giving the handy Tutorial and Practise modes a try, it didn't take long to get into the swing of things, and there are also six difficulty levels to try out in the Challenge and Campaign modes too. As is usually the case with games like this, the objective is achieving high scores so the higher difficulties are the ones to aim for. In keeping with the game's nature, you start with a really high score which gradually goes down as you play - getting to zero constitutes the perfect game and some shots include 'Retro/Quarks' which add plenty of score multipliers and bonuses to bring it down even quicker. This could all be for nothing though... Rhythm-action games can be and usually are very creative but they must excel in one area in particular to stand a chance - the music - which is, after all, the whole point of these games. The graphics are quite nice - the stages are side-viewed scrolling affairs with lashings of fluorescent sparkly stuff going on, as well as various antics in the background to distract you. Happily, the soundtrack here is even better. The tracks are all original 'electronic' compositions, but they're thumping, catchy pieces and 'un-firing' your shots in time to their beats is a unique and thoroughly enjoyable experience. I didn't know what to make of Retro/Grade to start with - no doubt it just looks like a jumble of flashy lights over dark backgrounds in the screenshots, but it isn't a hard game to grasp when you start playing and it takes little longer to become hooked! A unique and welcome twist on the slightly tired rhythm-action genre.